Editor’s Note: This whiskey was provided to us as a review sample by Coalition Whiskey. This in no way, per our editorial policies, influenced the final outcome of this review. It should also be noted that by clicking the buy link towards the bottom of this review our site receives a small referral payment which helps to support, but not influence, our editorial and other costs.

The 20’s are upon us again – even if their secondary arrival can’t exactly be called “roaring.” With them comes in a brand new whiskey line that pays homage to a century before – Coalition Whiskey. Coalition is a three-person conglomerate that is creating 100% rye whiskey finished in Bordeaux wine casks (or barriques) and is placed in a spectacular bottle.

Small groups coming together to create and run whiskey companies are the minority, but have made some incredible products (Billy Walker is a great example, responsible for the revivals of some leading Scotch distilleries). This group is the combination of a spirits CEO, an expert winemaker and consultant, and a long-time whiskey maker.

It’s these talents that give Coalition’s whiskies their special edge. Leonid Yangarber, formerly of Russian Standard Vodka USA, formed the idea and the basis of the business. Ludwig Vanneron personally selects every wine – and every individual barrel – that is used in the finishing process. And Steve Thompson distills the whiskey itself at his distillery, Kentucky Artisan Distillers.

And special is the first impression you’ll get from this whiskey. The bottle is absolutely gorgeous, looking more like a fine fragrance than any swill I’ve seen. It’s designed in the 1920’s art deco style with cut ridges and a spherical top (although this unfortunately separated from the attached cork after about three uses). The metal label is plated in genuine 18K gold. This bottle is all of the extra that has come back in style.

It’s not unheard of for whiskey to put an emphasis on the bottle. Macallan has a Masters Decanter series, all released in crystal decanters – but that’s Macallan. This is a small, independently owned brand. It’s always a concern that imagery is being used as enticement to make up for a less substantial product – despite Coalition labeling themselves as “super-premium.”

As someone who roots for the little guy, I was relieved to find that this was not the case for this expression. It was surprising and delightful, the former even more so for the fact of rye whiskey being a bit difficult to work with, particularly when it’s the only thing in the bottle. As much as I enjoyed sipping it, I think this whiskey would really excel in a spirit-forward cocktail. 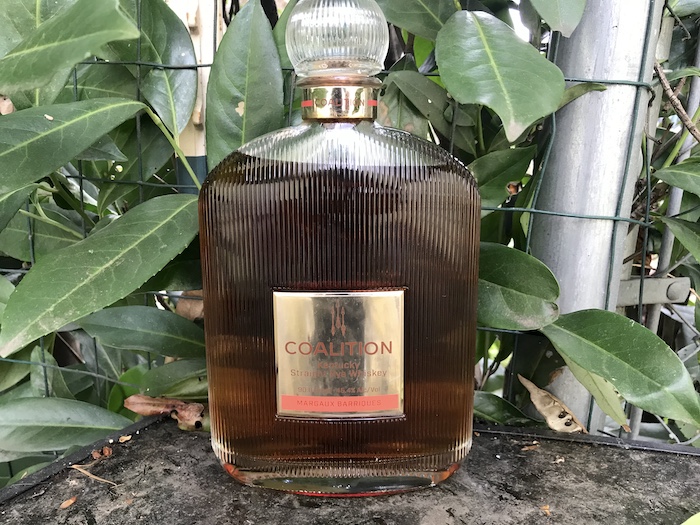 Nose: Heady and fragrant. Candy corn leads into papaya, dries on the end with oak.

Palate: Mid-line texture, spicy rye both lingers and leads into musky flowers and a bright soapiness. The fairly quick finish goes out with cereal grains.

This is drinkable in the extreme. The spiciness has neither heat nor grassiness. What really comes through is the grain. There's n a lot of flavor variety, but what does come through tastes good, and shows the best of what rye can do.