Going into this review, I think it’s important to start with a concept that was new to me coming in: bottler’s brand.

Essentially, Chapter 7 – the source of the 19-year-old Highland whisky this review pertains to – acquires a selection of barrels from other distilleries, ages them and bottles them under the Chapter 7 brand.

Obviously that’s not a new concept, as innumerable American operations do this under a practice called “sourcing.” The practice just seems a bit more transparent in the case of this “independent bottler’s brand,” as they identify the source of their whisky (or not) in accordance with the original distillery’s request.

The Switzerland-based Chapter 7 was founded by Selim Evin, who details his inspiration for the project, from the inspiration from his Scottish grandfather as a teenager to launching the company in 2014.

“We don’t produce but hunt for whiskies … and bottles the ones that are extraordinary,” he notes in his explanation, going on to compare the maturation process to aging of humankind as described Shakespeare’s Seven Ages of Man monologue in “As You Like It” (the inspiration for the company name).

The company has put out 34 whiskies since its inception, mostly Scotch, with some earning a number of accolades, including this 19-year-old Highland Single Malt. In addition to full-sized bottles, they have turned to sets of cigar-like “tubes” (packaged in humidors)  and even launched a crowdfunding campaign in 2016 to help ratchet up distribution.

While Chapter 7 gives very little detail about any of its whiskies, this one has precious few details as the distillery that made this whisky was “undisclosed,” other than that it was Highland distillery. What is clear from Caskers description and a Nov. 5 repost on Chapter 7’s Facebook page is that this is a vatting of two whiskies aged for 19 years in sherry casks, producing 1,076 bottles.

The final product comes is bottled at cask strength, 112.4 proof, non-chill filtered, and sold for about $160. 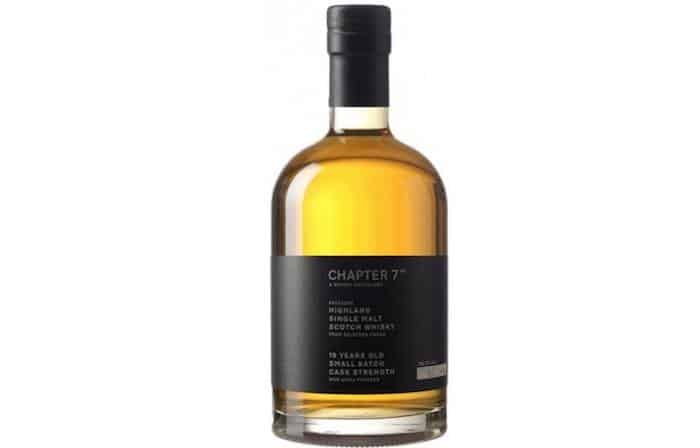 Vital stats: Made by an undisclosed Highland distillery, aged in two sherry casks for 19 years blended together at cask strength of about 56.2% ABV and sold for at least $160 per bottle.

Appearance: Pale golden amber, much lighter and watery-looking than average, but not outlandishly so.

Nose: The first sniff begins sweetly like baked apples in a pie with faint undercurrent of caramel. That takes a bit of a spicier turn with notes of oak, allspice, sandalwood and a hint of smoke.

Palate: Undiluted entry starts with the flavor of a very rich, earthy caramel with a faint nuttiness to it. That quickly shifts to a rapidly-building spicy character reminiscent of clove and cinnamon, which is much more potent than normal, given the relatively high alcohol content. Swallowing brings sweet, nutty, caramel-like lull before the spice builds back up again, crescendos and tapers off to leave a smokey, caramel residue coating the tongue. I also tried adding a few drops of water to a subsequent dram, which blunted the spiciness on the front end along with all of the other aspects; so I advise against diluting this one.

While this 19-year-old Highland was a bit harsher than I normally like – to be fair, I tend to favor a sweet, Speyside – I really enjoyed the journey a dram of this whisky took me on, with sweeter notes waxing into spicy flairs, then waning back into sweetness. Although the undiluted intensity kept it from dazzling me into a perfect score – again I’m biased toward sweeter Scotch – this is still a great bottle worthy of sample if you can find it and afford this pricey bottle.