Editor’s Note: This whiskey was provided to us as a review sample by 3 Badge Beverage. This in no way, per our editorial policies, influenced the final outcome of this review. It should also be noted that by clicking the buy link towards the bottom of this review our site receives a small referral payment which helps to support, but not influence, our editorial and other costs.

3 Badge Beverage Corporation has imported a 7-year Canadian whisky to its portfolio. The Benjamin Chapman whiskey is named after an elusive jet-set figure in the sixties, however, there is no real information about the man behind the name. But does that really matter? There are so many mysterious figures behind a bottle of whiskey that are real or imaginary. What counts is the quality of the whiskey.

The blend for the Benjamin Chapman 7-year is fairly unique with its 51% rye spirit and 49% wheat spirit. Usually, if they are high rye, we will see a blend of 51% rye, with the other 49% being a mixture of malted barley, corn, and/or wheat. While the rye spirit is aged 10 years in alligator char white American oak, the wheat spirit is aged 7 years in lighter charred barrels.

All the grain for the spirits is grown in Canada, and more specifically, the prairie provinces: Alberta, Saskatchewan, and my home province, Manitoba. The use of wheat in whisky is to substitute rye. Rye gives spice to the flavor profile, and wheat affects the mouthfeel of a whiskey.

Knowing this, we should expect the Benjamin Chapman 7-Year Whiskey to give us the best of both grains, so let’s find out… 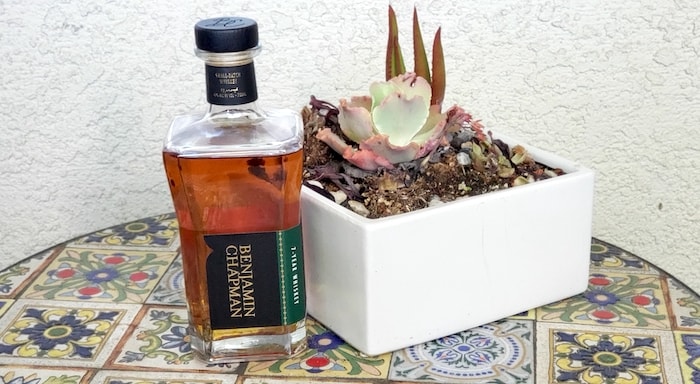 Nose: The aroma of honey and maple syrup waft above the amber liquor. I have to fight with the heavy acetone to pull anything else from it. Once I do, I am reminded of frosted mini-wheats and overly ripe banana bread.

Palate: The mouthfeel is soft and delicate. However, the flavor profile is lackluster and everything about it is mild in every sense. The whiskey is only slightly sweet, slightly dry with oak, and slightly spiced. For the finish, the acetone from the nose shows up, but it is more so similar to whitedog.

For the Benjamin Chapman 7-Year Whiskey, a lot of time was spent on the design of the bottle and the idea of the elusive man it was named for. However, there are plenty of whiskeys on the market with more backstory to the man behind the brand, so it’s a shame that we aren’t given more from a marketing standpoint (I appreciate a fictional character with a fleshed out background).

I am certain that 3 Badge Beverage Corporation rushed to add a whiskey to their portfolio to their disadvantage. I think they could have spent more time in the blending room. Also, there are far better tasting Canadian whiskies on the market at the same price point. I say skip this one.