Kyle Henderson likes a good surprise as much as the next guy. Sometimes, he gets one with the annual Angel’s Envy Cask Strength bourbon.

“We don’t decide ahead of time how many barrels we’re going to use and what it’ll taste like,” the Angel’s Envy Production Manager told me recently. “We see what we have. Don’t care what we did last year, [to be] quite frank.”

The bourbon-drinking world cares. The Angel’s Envy Cask Strength release has become widely anticipated in the whiskey world every year since its 2012 debut, when one publication declared it the best spirit in the world. It retails for $200 a bottle, if you can get it. On secondary markets, it often sells for more.

During the year, Henderson sets aside bourbon barrels he thinks are aging especially well and might make the cut for Cask Strength. He says about 76 barrels finishing in Portuguese port wine casks were set aside for the 2019 release. Ultimately, 45 or 46 barrels were selected for the final expression. That’s enough for 14,000 bottles, up from 12,000 a year ago.

Regardless, the Cask Strength release is likely to remain the premium expression for the growing distillery. The 2019 version is a blend of bourbons aged for 6, 8, 9, 10, 13, 14 and 15 years.

“With the growth of the brand, you get more select casks to choose from,” Henderson says. “You can identify more, and taste more. It’s a very fun project for us.” 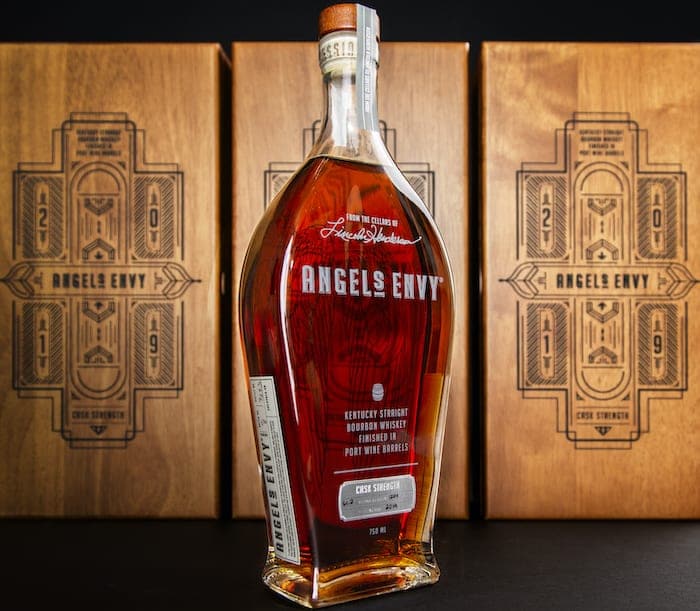 Palate: The port finishing is evident, with dark chocolate and plum on top of the traditional bourbon flavors. Toffee. Butterscotch. Cinnamon. Sweet undertones.

This bourbon lives up to its reputation – which, in this case, is high praise. I prefer it with a little bit of water and air, to round out the high alcohol content. But the flavor is exceptional, and it comes with a long and elegant finish.

Henderson says he tastes honey in the 2019 release, which is not something he usually associates with bourbon. I have to agree with him; it’s subtle, but it’s there. This is a whiskey I’d be happy to pour for any occasion… or no occasion at all.