Editor’s Note: This whiskey was provided to us as a review sample by Westward Whiskey. This in no way, per our editorial policies, influenced the final outcome of this review. It should also be noted that by clicking the buy link towards the bottom of this review our site receives a small referral payment which helps to support, but not influence, our editorial and other costs.

But I will give it this much: With more than a dozen craft distillers within walking distance – or, if you’re a little more gutsy, easy riding distance on one of downtown Portland’s ubiquitous e-scooters – there’s an impressive variety of whiskies and other distilled spirits to try on Distillery Row. (Aquavit, anyone?)

Shortly before the pandemic made things considerably more difficult, I picked up a “passport” for Distillery Row and studiously visited each outpost. There was a fair amount of whiskey I liked, and plenty I didn’t. One of the distilleries that clearly stands out in my memory from that 2019 weekend, however, is Westward Whiskey.

Westward specializes in American single malt, using barley from the Pacific Northwest and distilling all its spirits onsite in Portland. One of its taglines is, “Single Malt Reimagined.” What I found in my Distillery Row tour is that Westward’s whiskies were uniformly interesting and well-crafted, and I made a mental note to come back one of these days and learn more about the people behind it.

It was distilled using an in-house ale yeast before maturing in newly charred American Oak barrels in Oregon. I still haven’t made it back to meet the team behind Westward, but I was curious to try the cask-strength version of a whiskey I had enjoyed back in 2019. 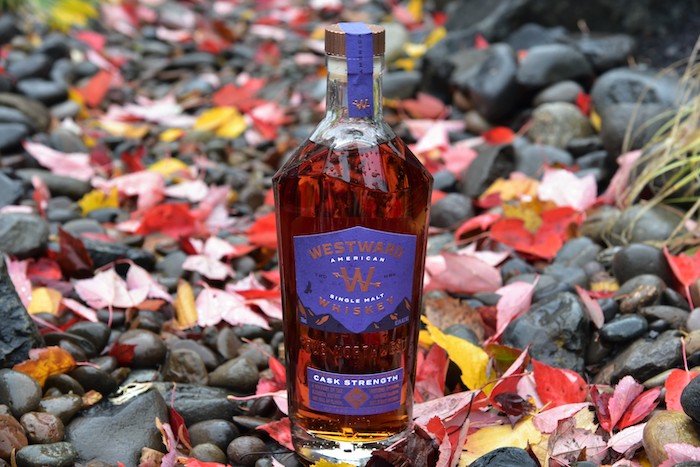 Appearance: There’s no age statement on this whiskey, but the deep, rich color lets you know it has done some aging. (That might also be a byproduct of the new charred oak barrels.)

Nose: The 125 proof comes through right away; the ethanol is evident from the first sniff. Give it a few minutes to air out, and I smell maple, sawdust, vanilla extract, and chocolate-covered cherries. The bottom line is that there’s a lot going on in this whiskey.

Palate: The first sensation is sweet and a little bit fruity, bringing to mind the sugar-coated orange slices my grandfather used to keep on his kitchen counter 40 years ago. The whiskey changes in the mid-palate, though, becoming both spicier and more chocolatey. Think a Mexican hot chocolate, and you’re in the neighborhood. It eventually fades into a creamy, buttery finish that doesn’t entirely work for me.

One of the problems with American single malt as a category is that nobody knows what it will be, one bottle or one distiller to the next. I tend to compare them to Scotch or Irish whiskies, given the barley base. Often, the American single malts suffer in that comparison. Westward seems to know what it is and what it wants to be, however, and more than holds its own. I wasn’t wrong back in 2019 when I circled Westward Whiskey on my Portland Distillery Row passport and decided I wanted to learn more. I still do. This cask-strength release is something distinctly itself – featuring maltiness, of course, but with a bourbon-like influence from the new charred oak barrels and a personality that comes from the Pacific Northwest brewer’s foundation underlying the distillation.