Wishing for Whiskey on an Island of Rum

Picture this: a small Caribbean island, surrounded by warm, gleaming aquamarine waters, with smiling, friendly people, good food, lively bars. Pleasant, eh? I recently came back from a one-month housesit on the Grenadine island of Bequia, and it’s the very place I described above. It is lovely, but it can be a trifle hot and humid. One must stay hydrated.

And the way people stay hydrated on Caribbean islands is with rum. LOTS of rum.

Rum, yes, so many choices, many yummy. In the time I spent on Bequia, here’s how I had my rum:

But you see what’s missing here—no whiskey. Rum is someone I date now and then, with pleasure, but whiskey—whiskey is my steady, my boon companion, my never-go-without. Whiskey settles the digestion, braces one for change, makes the sun shine just that much brighter. You don’t give over whiskey without a fight. Or at least a raised eyebrow.

I should have known what I was getting into when we first took the one-hour ferry ride over from St. Vincent to Bequia. It was stormy afternoon, the waves were thrashing and the wind and rain whipping through the top deck. I was delighted to see that there was a tiny bar at the bow of the big boat, and Alice and I wobbled over for a little tot. I was thinking a nice stiff rye, or a bourbon, but amid the tidy collection of bottles was nothing that spoke of long coddling in new (or old) oak. No, there were rums, lots of them. 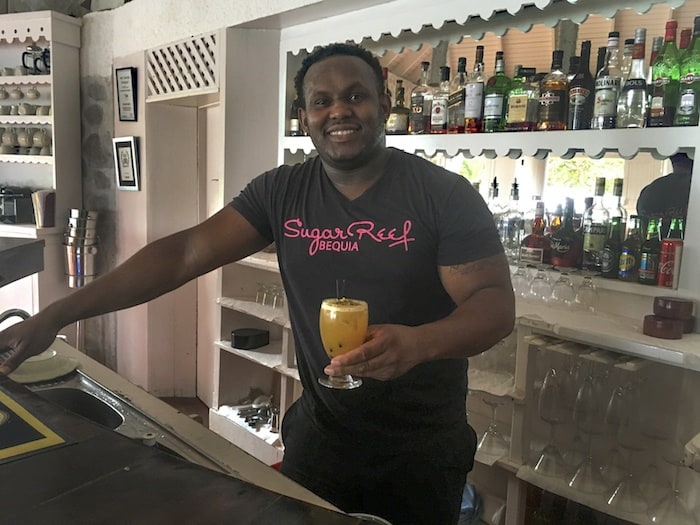 Well, I didn’t grumble too long, because a neat shot of decent rum on a rolling boat was still a fine thing. But I was soon to find that a “Where’s Whiskey” hunt would occupy my island time.

It seemed my beautiful island treated whiskey like an afterthought. The first bar I went into looking for a rum respite, I saw many gleaming bottles—of rum. (Granted, there was a fair amount of vodka and gin too.) Finally, I spied a single bottle of the brown succor, though I had some mild disappointment that it was good ol’ Jim Beam. OK, sure, Jim Beam is bourbon, and it’s been around long enough to have earned its shelf space. But it would have been nice to see some of its small-batch brethren, maybe some Booker’s, or Basil Hayden’s or the like.

But Jim Beam it was. Fine. The next bar I tried, look at all those rums! But over there, yes, what? A bottle of Jim Beam. And no other whiskey. Were they moving this same bottle from bar to bar? At a lovely restaurant, with the lapping ocean waves sounding through open doors fifteen feet away, a place with great food and at least 15 specialty rum drinks on the menu, what whiskey did they have? I don’t have to tell you, but I will: Jim Beam.

So I accepted that this was a conspiracy. I spent some time trying to explain how to make my style of Manhattan using that Beam to the bartender there, but I gave up and had a rum punch. But later on in our stay, we went to a gourmet store on the island, and I saw some glittering bottles of Knob Creek and Bulleit and Elijah Craig. But the prices! Much as I craved, I couldn’t cave to those prices.

The homeowners came back to the island for a couple of days before we left. We were (naturally) having a rum and pineapple on the back deck when I mentioned that I really missed bourbon. She said she was a Scotch drinker, and had some bourbon that she never drank. She returned with a bottle for me, and it was—wait for it—Jim Beam.

By the time we flew back to the states, I was desperate for a good whiskey cocktail. So, I ordered a couple of Michter’s Rye Manhattans for me and my sweetheart Alice at a bar at the JFK airport. The bill was $46.

But man, were they good.