Back durning the Vietnam War era the United States Army apparently went through a lot of old wooden howitzer cartridge boxes. These boxes, made from red and white pine, with original ropes, hinges and clasps, were discarded after use. Millions were burned or buried over the decades. A number have been repurposed though, and for one innovative design team out of Canada this means turning them into slick mini bars you can store whiskey in.

Boîtes de la paix, the team behind these boxes, consists of multidisciplinary artists Bruno Chouinard and Anne Lapierre. It is said they recently found a major number of these increasingly rare boxes in the “deep heart of the United States.” The two left their studio in Montreal and ventured to the undisclosed location to acquire them, returning with “a full truckload of ammunition boxes picked in four different states.” 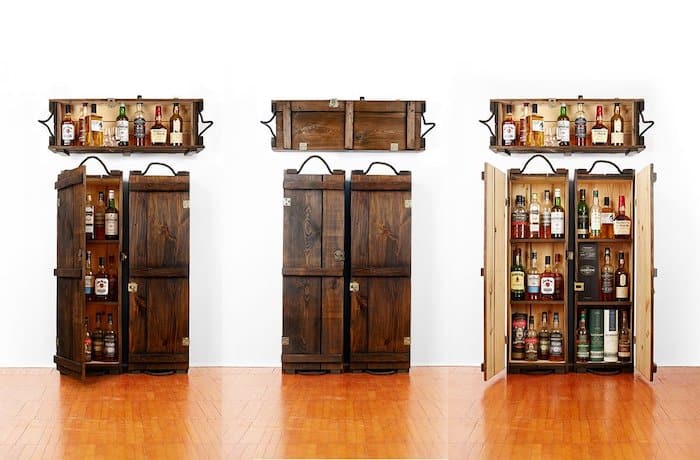 The mini bars, which come in a range of color choices, still include the ropes, hinges and clasps as previously mentioned. The designers also made sure to keep an original dated stamp on the back of the boxes, helping to preserve their unique history.

Each one of these runs a little over $400 to purchase, and looks to hold seven normal sized (750 ml) bottles, complete with cut out bottle neck holes at the top. For those that want to buy something even more unique, an over $550 design called the Reserve is available that’s essentially a free standing whiskey cabinet made from a rarer bigger size box. It holds more bottles and has more limited availability.

It should be noted as well that these boxes can be shipped to the United States and also overseas.