The Sazerac Cocktail: New Orleans Culture in a Glass

Thanks to the recent boom in bourbon and the revival of cocktail culture, there are not many who are unfamiliar with the New Orleans classic: the Sazerac cocktail.

A potent concoction of spicy rye whiskey, sugar, and water, brought to life by the sweet anise flavor of absinthe and a pop of bright lemon oil. No proper Sazerac would be complete without the addition of Peychaud’s Aromatic Bitters, an ingredient that pulls all of those wonderful complex flavors together and gives the cocktail its vibrant reddish hue. If you are lucky enough, you can even get the cocktail made with now much sought-after Sazerac Rye Whiskey from Buffalo Trace. The origins of the Sazerac cocktail, like most libations in America, have been slightly skewed and romanticized. 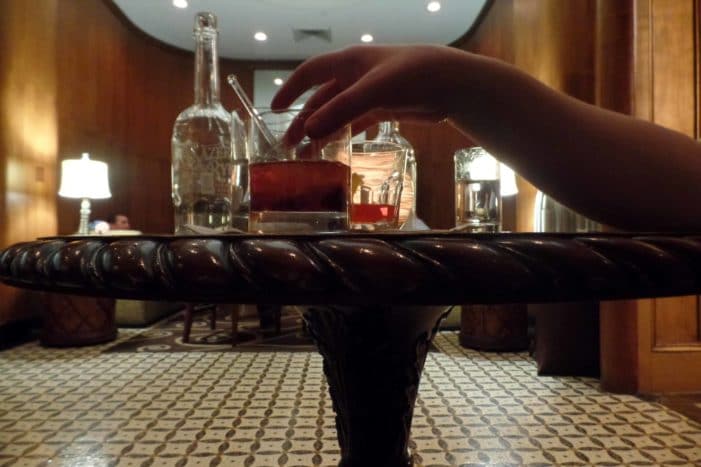 Kicking back with a Sazerac. (image copyright The Whiskey Wash/Joshua Sparks)

Brandy Slings and the Cocktail

The Sazerac, depending on whether you are splitting hairs, is not the first cocktail in America (trust me, no one’s heart aches more than mine at that thought). The idea of mixing spirit with water and sugar had already existed for at least two hundred years by the time the Sazerac came around. Early colonials were notorious for cutting their harsh, unaged spirits (in particular brandies and rum) with water and sugar. These are better known as toddies and slings; the most popular slings were made with brandy and flavored with a dash of Boker’s Bitters. This “cocktail,” recognized as early 1803 in the Farmer’s Cabinet, is merely the first (that we know of) to incorporate the use of aromatic bitters.

Aromatic bitters, or aromatic bitter cordials, have their roots in apothecary; neutral spirits infused with local or exotic plant roots, tree bark, citrus peels, and spices. It is believed that when these ingredients are blended together and allowed to steep that they gain medicinal effects when consumed. The most notable use of consuming bitters is for the age-old treatment of stomach ailments. The brain associates bitter flavors with toxins and jump starts the digestive tract to help process the perceived threat out of its system. In a time when alcohol consumption was rampant, because water by itself was a risk of disease and parasites, it appears that the addition of bitters to slings and toddies became a no-brainer as to double down on the health benefits of both.

No Stomach for Grain

Whiskey – rye, in particular – would also not be seen in the cocktail for nearly half a century by the time it would appear on menus in New Orleans. Grain whiskies coming from the North were still relatively new and the harsh spirit was reserved more for trade or as the drink of farmers and lower class. New Orleans, a port city having been primarily controlled by the French and Spanish had a taste for fine brandy and Madeira. The most sought after of those brandies was Sazerac brandy, which came from Sazerac de Forge et Fils. Inevitably, these slings began getting an extra boost of flavor from the addition of absinthe and the locally celebrated aromatic bitter cordial crafted by local pharmacist Antoine Amédée Peychaud.

Antoine Peychaud found is home in New Orleans in the early 1800’s when his family came to the United States as refugees from Haiti. Although a wealthy family from French descent, the Peychauds’ quickly found themselves displaced when Haitian slaves revolted in the 1790s. By 1830, Antoine had established a bustling pharmacy on Royal Street and, by 1850, had become an established figure in New Orleans for his highly prized bitter cordials that he formulated himself. The Gentian based and anise heavy bitters were touted as the premiere cordial to “Restore Appetite and Prevent Dyspepsia…”.

Around this time, a young man named Thomas H. Handy began working at a liquor shop owned by Sewell T. Taylor, who built his reputation as a purveyor of the finest Sazerac brandies. Unfortunately for Handy, this was a time of war within a nation divided and it was only a matter of time before he was called into service. Handy returned from the Civil War, only to find that his former employer had passed away. Handy, however, found work with the Sazerac Coffee Shop.

In 1871, Handy would purchase the Sazerac Coffee House and rename the business to Thomas H. Handy & Co. In addition to Sazerac brandy, Handy built up stocks of vintaged brandies from Sazerac as well as bourbon and rye whiskies that were making their way more readily down the Mississippi from Pennsylvania and Kentucky.

For all of his success though, Handy would lose his company. Because of poor business investments around the city of New Orleans, Handy had to come up with money to pay off his debts. Handy found his successor in an employee named Vincent Micas. Micas rebranded Thomas H. Handy & Co. to the very clever firm name of Vincent Micas. Micas, in a stroke of genius, had this opportunity to secure a business relationship with Peychaud and become the sole proprietor of Peychaud’s Aromatic Bitter Cordial. Thomas H. Handy, however, was unable to pay off his investors and lost everything. To make ends meet, Handy found himself now in the employee of Vincent Micas.

Things did not remain glib for Handy, however. By the summer of 1880, determined to re-establish his brand, Handy wit back into business for himself and,  just blocks away from Vincent Micas, reopened Thomas H. Handy & Co. This sparked a rivalry between the two and, in an attempt to draw business from one another, each claimed to be the sole importers of Sazerac brandy. By 1882 Micas decided to move his coffee house, The Sazerac Barroom, to Camp Street and Thomas H. Handy took advantage, reopening The Sazerac House in its original spot by Exchange and Royal with all brand-new amenities.

The following year, Peychaud passed away and Micas sold his business to a firm called Baumann & Jung. This firm became the first large scale distributor of Peychaud’s Bitters, and this left Thomas H. Handy and his Sazerac House as the last man standing.

Handy, however, was not out of the woods just yet. By this time, France was in full grip of the Phylloxera blight. Phylloxera is an aphid that feeds on the roots of weak grapevines. It was believed that the bug was brought to Europe from Florida in an attempt to graft different species to help vines grow and thrive in the hot, humid and sandy conditions of the American South. Farmers would first begin to notice the sudden failure of vines in the 1850s, but it would take nearly 20 years for the tiny bug to be linked to the blight running rampant.

Phylloxera is mostly recognized for its effect on the wine industry, nearly bringing it to a screeching halt near the turn of the century and leading to the rise of absinthe becoming the drink of choice in Paris. Most do not attribute this to the rise of rye whiskey in America; however, as more vines failed, wine production, of course, was affected, but so was brandy. Without healthy crops, you cannot harvest enough grapes with right sugar content for fermentation to make low wine that can be distilled into brandy. As a quality, unadulterated brandy became more scare, the costs began to skyrocket. This left many in the American South to completely abandon French brandy and cognac for the cheaper and more readily available bourbons and rye whiskeys.

By the 1890s brandy had completely fallen out of favor by bartenders across America and was favorably replaced with rye whiskey. The probable reason for this is because rye tends to hide its youthful age better than bourbon does and its snappy, minty-herbaceous character leads to better balance with sugar and the anise forward character of Peychaud’s Aromatic Bitter Cordial. By the 1920s, the Sazerac cocktail we know today had become the drink of choice of New Orleans and the rest, as they say, is history.

147
Shares
1.6k
Views
Share on FacebookShare on TwitterGet Our Newsletter
Cheers to the Dads! Personalize a bottle of his favorite whiskey to create a modern gift for the modern man. Use code: FATHERSDAY20 for $20 off your next order of $100 or more at ReserveBar