Making whiskey can be considered, from a chronological perspective, the last link in a long series of innovations around the ancient art of distillation and sublimation.  Making alcohol to drink is simply refining something base that’s been dug up from the ground around us and its first applications were anything but potable.  That it was later used for imbibing started on a long road where the paving stones on the path to our current version that we enjoy today was anything but straight.

The long course of distillation’s journey around the world was ironically tied to religion.  In a polarized modern society, we view science and religion as almost incompatible with each other but in the ancient world, they were one and the same: Science proceeded out of philosophy.  The movement of the stars in the sky was the same music of the spheres of the Ptolemaic tribes of northern Africa that proved the existence of their gods; and to navigate the seas by their use meant the gods traveled alongside them.

The constant movement of a flow of water revealed the presence of godliness to animist-centric peoples, from Asia to North America.  To harness that water to do work for them extended their belief that gods were present in all they did and were responsible for their success and failure. 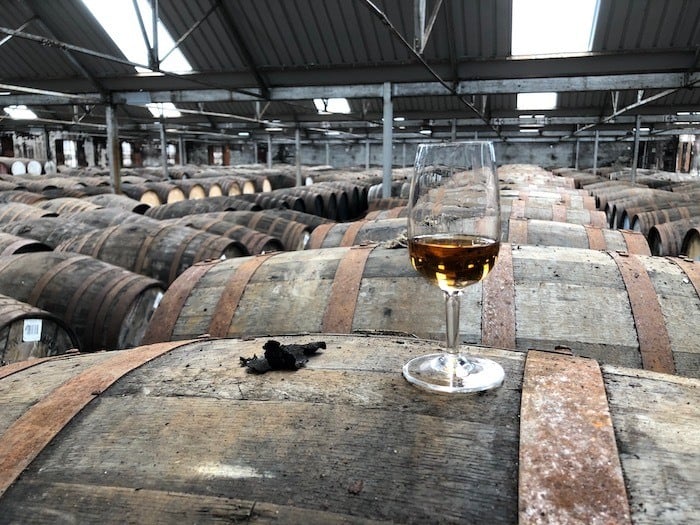 In the West, this mysticism became aligned with the practice of alchemy, the changing of substances from one form to another.  The most credible evidence of the earliest of these is known to be from Zosimos of Panopolis (the Greek word for Egypt) who lived at the end of the Hellenistic period, around 300 AD.  His pursuit was to create not only gold and silver but a range of colors for dyeing through the use of base elements of sulphur and arsenic in a heating device that is surrounded by water.

Although the heated bowl, the cucurbit, goes back to ancient Egypt, Zosimos credits that water-cooled device to the only woman to be associated with these practices, known alternately as Maria the Jewess, or Mary the Prophetess.  A century or so earlier, she had fashioned a device for the refinement of elements in a contained system that worked under pressure when heated. It contained retorts, or exit pipes, to collect the results.  What little of her influence has survived today is a device known by cooks the world over: the bain-marie, or double boiler.

In the pursuit of dyes, ointments, perfumes and tinctures, it was the shaman of ancient Persia, the alchemists of the Alexandrian period and mystics of ancient Greece that developed the transformative process of distillation that we now know it, through thousands of years of experimentation and usage.  It is thought that Aristotle employed a crude and simple form of distillation to attempt desalinization, separating the salt from sea water.

The famed Persian chemist Jafar al Sadiq in the 8th century codified many of the rules of compounding then separating, through cucurbit and alembiq, a curved pot on top, which together made a crude pot still. The Arabian caliphates that began to spring up in North Africa and the Mid-East after the death of Mohammed adapted and continued these traditions, developing them as part of their understanding of the physical world, creating the seeds of science and experimentation.

Take some organic matter, solid or liquid, put it in some sort of vessel or pot, cover it with another pot and attach a pipe to it.  Agitate it with a heat source and as the transformation from solid/liquid to gaseousness happens, collect the result.  Boil, separate, capture and collect to create tinctures, perfumes, ointments and cosmetics.

This miracle of transformation was considered an act of their god Allah and this traveled over the Iberian Peninsula through Europe with the Islamic invaders of the 8th and 9th centuries, where it fell into the hands of the only class of society that could understand and deduce its meaning, the monks and the abbots of the holy Byzantine Empire.

There it was interpreted as an act of their own God. Being the only educated class, many of whom were royalty, these holy men and their scribes who kept the holy traditions of Christianity alive through their writings and teachings took hold of this divinely inspired act of transformation and brought it to new levels of utility for the world around them.

The early monks and priests of the first and second millennium Church were the early doctors of their time as well as the pharmacists, barbers and surgeons.  The monasteries and cathedrals where they spent their lives in solitude were the research facilities of their day and the practitioners inside them were the antecedents of today’s scientists and engineers.  And with the acceptance of this new wonder, distillation, from their Islamic peers, causing the separation of one elemental life force, liquid, into another elemental force, gas, it produced a holy “spirit” that could only have been inspired by God, a water of life: aqua vitae.

Seeing that the concentrated alcohol that resulted from purifying a fermented beverage such as wine had a corrosive effect on other organic matter led modern inheritors of that knowledge to understand that alcohol in any form was a solvent.  With that knowledge, as it had been done for ages before them, they added flavorings through herbs, roots and other plant life, breaking them down through immersion in alcohol to extract their essential oils, further concentrating them and adding them back again.

A good example of that is the ancient Dutch drink “genever” of the 1600s with its use of the extract of juniper berries, thought to be an excellent physic for disorders of the intestinal tract.  We know that drink today as gin and many people still believe in its “medicinal” powers.

The other thing monks and priests were good at was spreading the Good Word and part of their mission was to go out into the world to do so.  The early Church was as much a colonizing force as the kings and princes and it sought to establish its reach through the powerful armies from which it was aligned.

The Norman invasion at the turn of the first millennium brought the twin forces of both Roman culture and religion to the British Isles. In Ireland, we see the Normans setting up individual church run economic zones, called the Liberties, outside the walls of Dubh Linn (“black pool”) in the 12th century. The monks and priests brought with them the secrets of the monasteries, and one of them was how to turn that farmer’s ale into something a bit stronger.

In the southern climates, evangelizing monks worked within the boundaries of where the ancient Romans conquered and marked the boundaries of their Pax Romana with vineyards. They had wine to work with, creating the first actual distilled products that we now know as brandy as early as the turn of the millennium.

To this day we continue to attribute the creation of modern spirit creations to those Brothers when we do further investigation into the aqua ardens (“strong waters”) of the Benedictine order or the green and yellow Chartreuse of the Carthusian brotherhood.

In 1310 a French theologian and philosopher named Vital Dufour publishes a tract describing the health properties of a distilled eau-de-vie, a water of life made from wine and fruit, known as aygue ardente (“fire water”) and mentions 40 different uses for it.  Here’s an excerpt, updated in modern vernacular:

“when applied to the injured member, this eau-de-vie will expulse all pieces of iron in the body.  If one drinks it, it will dissolve kidney stones.  It heals burns and headaches. It makes phlegm disappear.  It soothes a cough, tonsillitis and fever.  It relaxes the spleen and relieves the liver…”

But in the north, especially on the green, windswept islands of Britannia, Hibernia, Cambria and Caledonia the grapes were not as plentiful, and the harsher climate and extreme weather had shortened the growing season. This is the area of the world where the Roman emperor Severus had thrown up his hands in frustration about the lack of local wine and fear from the constant raids of the native Picts, Gaels and Celts. Like Antoninus and Hadrian before him, he set up more walls then high-tailed it back home.

What grew in abundance here were not grapes but grain: oats, rye, barley, wheat and other species that are no longer viable today. These farmers made beer and ale that gave the subsequent influx of monks something to work with. As we move into the 14th century, with the growth of distillation throughout the countryside of Ireland then Scotland, a new aqua vitae began to emerge as uisce beatha in Gaelic.

And with the coming years, technologies began to evolve: copper only instead of wood or baser metals; the use of a “worm” to condense the vapor; a better understanding of the role of water for fermentation of the beer; wood as a transport container and later as a flavoring agent; refined technologies in malting and grinding; coal replacing dung or wood under the still to generate more energy; finally the column still, the ultimate technology disruptor.

The whiskey in your glass traveled thousands of years to get there.  Don’t be in a hurry to drink it.

Adapted from the manuscript for “The Complete Whiskey Course” by the author.