A conversation I had in a bar a few years ago sums up my thoughts and attitudes about nosing, tasting and the identification of flavors for the ordinary American. My conversation partner happened to be Shinji Fukuyo, the Executive Officer and Chief Blender of BeamSuntory, the second largest spirits company in the world. In his capacity as Executive Officer, Fukuyo-san was wrapping up a press tour of the United States following the acquisition.

As we ranged from thoughts on the ubiquity of Jim Beam and the popularity of bourbon in general to the art of aroma detection, Fukuyo-san made a telling observation. “American’s are very smart people” he said. “I was interviewed by all the major communication outlets and known whisky bloggers during this tour. They had very specific questions, knowing questions, on a range of subjects from still size to barrel usage, from mash bills and fermentation times to climate and angel’s share. They had many facts in front of them and were hungry for more. But not one person asked me about flavor”.

I think he was genuinely curious as to why that occurred, especially when you consider his role as Chief Blender at Suntory, a man who literally creates the flavors in their bottles. And it was an observation that stuck with me and prompted a host of questions on what our relationship to flavor is.

In America, and in much of the western tradition of whiskey making, we place enormous importance on the makers of things, the distiller. It’s the distiller, the moonshiner, the bootlegger as manufacturer that we revere, one who takes raw materials and bends them to his or her will to fashion them into something else. It fits our romantic notion as a country of doers.

In the hierarchy of achievement in a Japanese distillery however, it is the blender who sits at the apex of the pyramid. It is this role above all others that represents the penultimate achievement, one achieved through years of apprenticeship and focus on the other tasks and jobs in the distillery. Shinji Fukuyo and his team, as do many blenders in distilleries around the world, spend their professional lives in quiet rooms surrounded by a thousand subtle flavors in carefully sealed jars and bottles. There is nothing sexy about this type of work, no physical movement that connotes activity or mastery. Just men and women with their noses in glasses, patiently allowing the whisky to come to them, to give up its mystery so that they may unlock those secrets and combine them to bring joy to the rest of us. 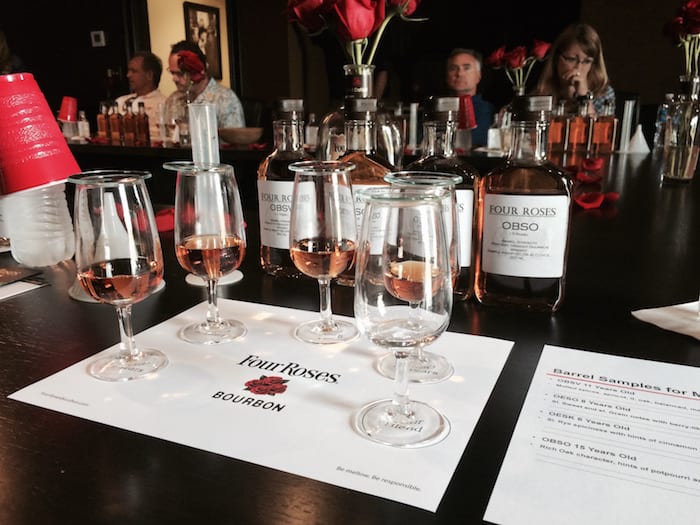 But there’s something more about Americans and our relationship to flavors that makes up our identity as Americans: we never developed a national vocabulary on flavor because to do so was thought of as un-American. We were the pioneering nation that settled a new land, cleared the trees and built towns and cities from the wilderness, and the same can be said for our northern Canadian cousins. The pioneers in the first century of nation building viewed the savoriness of pheasant and squab as just edible enough to quell the pangs of hunger, not the gustatory revelation tasted by the more cultured, city-bred elite. Lobster, considered a water scavenger no better than a seagull, was once fed only to prisoners.

Food for these intrepid souls was scarce, a source of energy, a means to an end, the fuel they needed to get things done. To dwell on the nuance of flavor, to establish a discussion about the delicacy of foie gras or even something as simple as the depth of a meat stew was considered “siding with the Tories” during the height of Revolutionary fever. As a result, it was the height of pretention, of “putting on airs” and thinking you’re above your station. Keep it simple, eat your food, don’t talk, clean your plate and be grateful was the American mantra of flavor. Then go out there and get something done.

In the Selkirk Grace, by Robert Burns, spoken during Burn’s Night celebrations prior to the Address to the Haggis, we get an inkling of our early cultural relationship to food:

This was magnified and reinforced with the arrival of two events that further shaped the American character and its relationship to food, aroma and class associations. The first was the arrival of Irish Catholic immigrants during the Irish Famine of the mid-19th century where more than a million people emigrated out of Ireland due to the catastrophic conditions that occurred there. Food was not only scarce, it was a luxury that was out of reach. Culturally they were attuned to the existing stock of Scots-Irish who had been here since before there was a country, who inhabited the mountains and outland areas of civility, where food was hunted, fished and scavenged from necessity.

The second was the world-wide Great Depression caused by the collapse of the stock market in 1929, the intensity of which fell to Americans. Food once again became the scarce commodity it once was to the settlers of the nation, only now it was in the cities that this occurred on the most disastrous scale. To live in a city meant that you did not grow your own food and were dependent on the burgeoning and unreliable supply chain to acquire it. Food was something you were dependent on others for.

This was followed by the second world war which brought food to the realm of sacrifice and the act of giving up food to support the war effort, or growing Victory gardens to make one more self-sufficient, was embraced with full patriotic fervor.

It’s no wonder then that by the time of post-war society building in America, food and flavor were wrapped tightly together by this series of traumatic, but culturally binding experiences: food was difficult to get and food was simple. The consumer driven MadMen took advantage of American’s simplistic notions of food and flavor and anyone from that era can relay the downhome satisfaction of simple foods that defined their early years: macaroni and cheese, peanut butter and jelly on white bread, canned spaghetti from the kitchen of some exotically named Italian chef. Flavored rice was delivered by a San Francisco trolley car, soup came from a can whose virtues were sung by 2 cute little cartoon kids, frozen broccoli came from a valley watched over by a gigantic green man and chicken was brought to us in a cardboard tub by a kindly white-haired man with a military rank.

The TV dinner was the highlight of our cuisine starved culture, introducing most of us for the first time to the international pleasures of burritos, turkey or chopped steak dinners replete with mashed potatoes and gravy and a colorful assortment of peas and carrots. Something called chow mein was boiled in a plastic bag as was chicken and rice, sort of a precursor of sous vide craze of today. The memorable words that defined flavor were sung by everyone around the dinner table: it was either “mmm-mmm good” or “finger-lickin’ good”. Its easy to see why Julia Child ran into so much opposition on the publishing of her groundbreaking cookbook in the 1950s, with few outside of New York and Paris understanding what she was writing about.

Whiskey was as simply defined as our food and for the most part people scored their whisky on two gradients: It’s strong or its smooth.

That was then. This is now

No other generation in America has come to the table with as much culinary sophistication as the current drinking generation today. Brought up on The Food Channel and HGTV, its new heroes are kitchen warriors who compete against each other in speed trials, utilizing the most exotic array of ingredients in culinary throw-downs. This generation has embraced food from all nations and with the revival of the crafted cocktails in the early 2000s, extended that to spirits of all kinds. Suddenly, vodka, the fuel of the bar for 20 years, has fallen off a cliff and is replaced by everything and anything brown: whiskey. Aged whiskey, imported whiskey, Scotch whiskey and leading the pack: Bourbon whiskey, from right around the corner in Kentucky. Rich, nuanced, flavorful, bold and big, it is a punch in the taste-buds to a generation that’s not afraid of flavor and welcomes the fight. It drove the revival of the classic whiskey drinks right into everyone’s vocabulary: Old Fashioneds, Manhattans, Sidecars, Rob Roys and Rusty Nails. It spurred an explosive growth in micro-distillation, first in the US then globally. It may have produced more digital and printed words than any other subject, since the beginning of time.

Whiskey is now and whiskey will be here for many years to come. And our tastes have finally caught up with it.

13
Shares
2.9k
Views
Share on FacebookShare on TwitterGet Our Newsletter
Get The Macallan® Rare Cask at ReserveBar. Shop now!