Tasting Through the Lowlands: Four Distilleries to Try

If the wild heart of Scotland is found in the windswept reaches of the far north, all barren moors and rocky coastlines, the Lowlands are Scotland’s brain: seat of its cities, engine of its economy, and the crossroads that serve as Scotland’s geographic and cultural link with England.

The Lowlands is the southernmost of Scotland’s whisky-making regions. Here, the landscape is soft and bucolic, with gentle rolling hills of barley crisscrossed with hedgerow-lined country lanes. Yet it’s also home to Scotland’s two largest cities, Glasgow and Edinburgh, and the Lowlands have a tighter history of cultural and economic intercourse with England than regions to the north. Years ago, due to a series of complicated taxation maneuvers, this was the source of much of the poor-quality whisky that was later rectified into gin down south in England. (For more on the economic history of the Lowlands, here’s Joe Micaleff with the backstory).

That combination of cosmopolitanism and rich natural resources have made the Lowlands a whisky powerhouse, at least in years past. Yet until relatively recently, the Lowlands had been on a decline, with many distilleries closing up shop.

Today, the Lowlands is on an upswing. Heritage brands like Auchentoshan and Glenkinchie are hitching their boats to the rising whisky tide, while new entrants like Daftmill and Kingsbarns are breathing fresh life into the region.

When it comes to style, the Lowlands have historically been associated with light, fresh, easy-drinking whiskies made with unpeated malts and frequently triple-distilled. (However, like many Scotch regions, distillers here are starting to experiment with deviations from their standard style, like Ailsa Bay’s peated Lowland whisky.)

If you’re just getting to know this under-the-radar region, here’s our recommendation for your first round of tasting homework: Three easy-to-find malts in the United States, plus a toughie you’ll have to work to get your hands on. 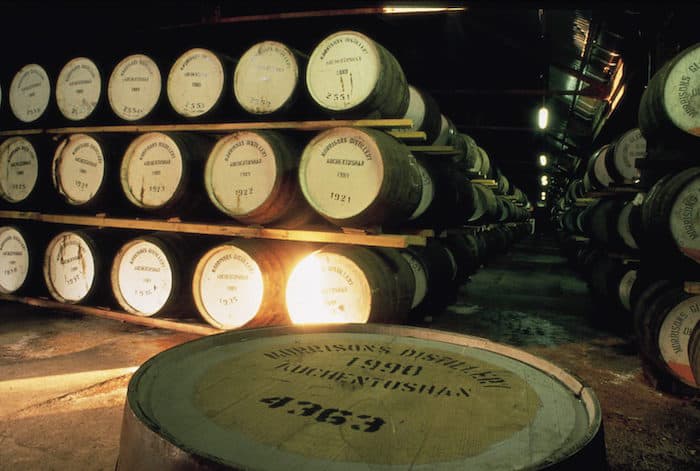 Located near the city of Glasgow, Auchentoshan is a triple-distilled malt whisky made from unpeated barley. The distillate is light, fresh, and fruity, making it a good canvas for showcasing a range of maturation casks, including bourbon, sherry, and wine. In the States, Auchentoshan Three Wood is widely available, and makes a nice aperitif whisky, especially for fans of Irish whiskey.

The Glenkinchie Distillery is just outside Edinburgh, and makes a slightly richer double-distilled whisky, again from unpeated barley. Its entry-level 12-year-old expression is delicate and satisfying, with grassy and floral notes alongside a straightforward malty sweetness. Again, it’s a nice pre-dinner sipper, and a fun base for cocktail experimentation.

Now owned by an Australian entrepreneur who made his fortunes in the yogurt industry (no kidding), Bladnoch is the southernmost distillery in Scotland. Even if you haven’t tried it, you’ll likely recognize its blocky, decanter-like bottles. Bladnoch’s 10-Year-Old is unpeated and not chill filtered, giving it a rich mouth feel and easy-going vibe.

Tiny, independent farm distillery Daftmill is located in Fife, the fertile penninsula to the north of Edinburgh. It began producing whisky in late 2005, but only released its first bottling this year, a remarkable show of restraint from a startup distillery. The Cuthbert family has been growing barley for six generations, so it’s no surprise they’re using estate grain for distillation. The first Daftmill releases have been distributed through U.K. retailers and some online channels, but they’ve sold out almost immediately.