It’s official: On both sides of the bar, people are ready for spring drinks. In creating new concoctions, many bartenders take inspiration from classics while adding their own spin. Cocktails created in these experiments range in flavor, but most of them feature lighter and more refreshing flavors than their seasonal winter counterparts.

Sometimes described as an everyman’s Julep, the Whiskey Smash is a simple cocktail that brings together muddled mint and fruit with whiskey to form a simple, delicious beverage.

For bartenders, muddling can add a time-consuming step to a cocktail, so some like New Orleans’ 12 Mile Limit owner T. Cole Newton have turned to herbal syrups. “This is a bit of a cheat for the Smash style of cocktail, but it’s cleaner, takes less time, and the taste difference isn’t huge,” he says. “The Whiskey Smash was one of the more popular cocktails on the menu when I worked at Commander’s Palace.”

One of his coworkers would specify for him to use rum instead of whiskey, and it worked. “I made a blue version, just to see, and I loved the way the appearance changed the overall impression of the drink by turning it a relaxing sea green instead of standard cocktail brown.” 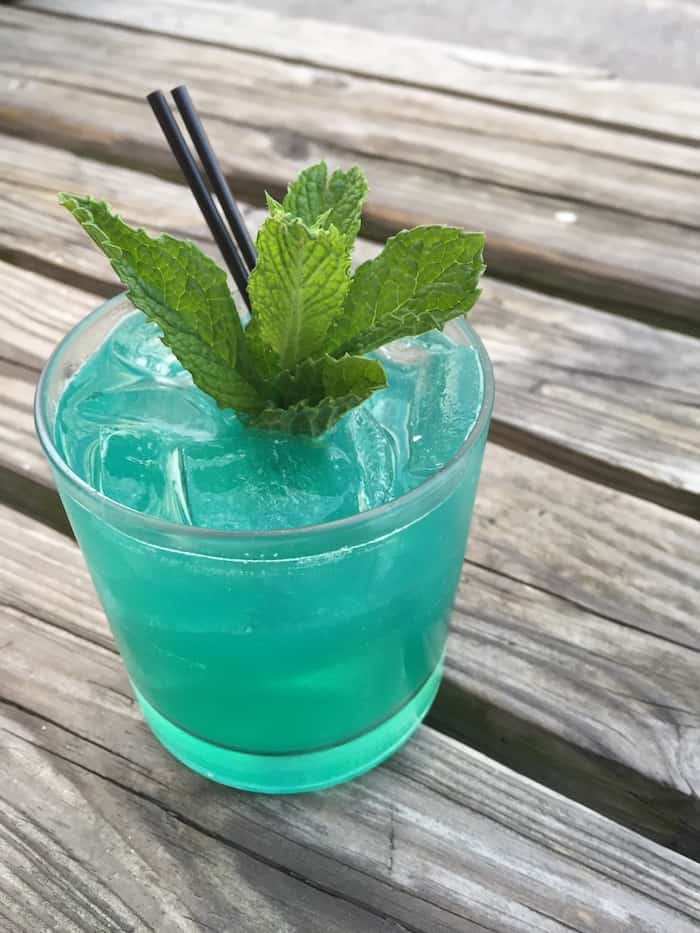 Shake vigorously with ice and strain into a rocks glass full of crushed ice. Garnish with a mint sprig.

*Measure out a loose 2 cups of mint, stems included. Steep in 2 cups steaming hot water for about 10 minutes, and strain. While hot, completely dissolve 3 cups of granulated sugar. You should wind up with about 4 cups.

The Whiskey Sour has been endlessly tweaked and recreated. Additions, subtractions, and substitutions have meant that this category is consistently home to some super creative innovation.

One such cocktail is bartender Clairessa Chaput’s Raspberry Beret. Created for a summer menu, Chaput evokes the memory of sweet tea with a berry twist to complement the port flavors in the bourbon. “I have always loved the simplicity of whiskey sours which is why I decided to go with the very minimal version of spirit, citrus, sugar, and bitters,” she says. 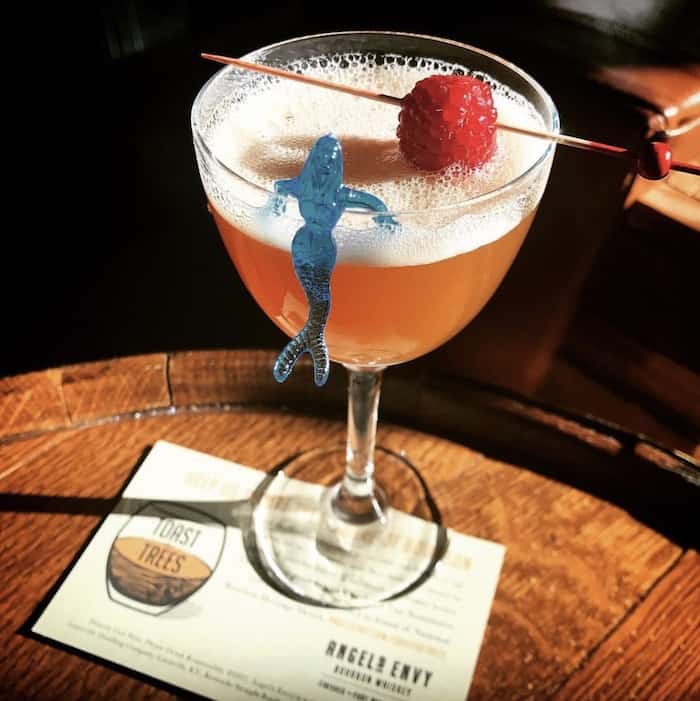 Shake vigorously with ice. Strain into a Nick and Nora glass and garnish with a skewered raspberry.

The Gold Rush is a more modern Whiskey Sour variation with a cult following. This simple drink replaces regular simple syrup with simple syrup made from honey. “I loved the Gold Rush from the first time I tried it,” says Pensacola, FL bartender Jeff Knott. “It’s incredibly well-balanced between verging on [being] boozy to being refreshing, but it’s also very crushable.”

Shake well with ice. Strain into a rocks glass over a large cube.

*Mix two parts honey with one part hot water. Pour syrup into a blender and add 25 grams of ancho chiles (less, if you prefer less heat). Blend and strain. Store in the fridge.

It’s hard to mention warm weather whiskey cocktails without including the Julep. Though it’s just mint, simple syrup, and booze, when its made right, it’s sublime. Australian native (and current Canadian) Shawn Soole brought together herbal and berry flavors to make a new spin on the classic cocktail.

“When I tasted the Zirbenz for the first time, it reminded me of thyme,” he says. “Years before, I had done a thyme-infused raspberry liqueur. The evolution of [the drink] went from there.”

Build all ingredients in a Julep glass. Let stand for two minutes, add crushed ice, and stir. Garnish with the mint leaves.

Like most other classic whiskey cocktails, the Whiskey Cobbler is a bit of an umbrella for a huge variety of drinks. Some traditional recipes call for pineapple syrup or fancy liqueurs, but the most simple take is to use whatever fruit you have on hand.

“[The Underdog] is a lighter, more refreshing cocktail that is easily replicable,” says Savannah bartender Robert Freeman. “I’d make it randomly for first time guests to gain the trust of new bourbon drinks. It would have little chance of winning a competition, but it’s still a crowd-pleasing cocktail.”

Shake vigorously with ice. Double strain into a rocks glass full of ice, and squeeze a grapefruit peel over top. Discard the spent peel.

*To make the strawberry syrup, combine 1 cup hot water, 1 pint sliced strawberries, and 2 cinnamon sticks in a sauce pan. Bring to a boil, strain, and stir in 1 cup sugar.

Sam Ross of the now-defunct New York staple Milk & Honey is credited as the creator of both the Paper Plane, an equal parts mix of amari, whiskey, and lemon juice and the Penicillin, a Scotch, honey, and ginger concoction. Both of these have inspired countless riffs.

When Shellie Edmunds started training on a busy night in Boston, she learned the Paper Plane. One of the names on her cocktail naming list was the “Paper Tiger,” after the Cake song, and the combination “really just kind of clicked while listening to the song one afternoon on the way into work,,” she says. “I had help from my colleagues and was able to really nail down the ratios for a good recipe. It’s incredibly approachable, highly alcoholic, and the overall flavor profile says, ‘Spring has sprung, bitches!’ ” 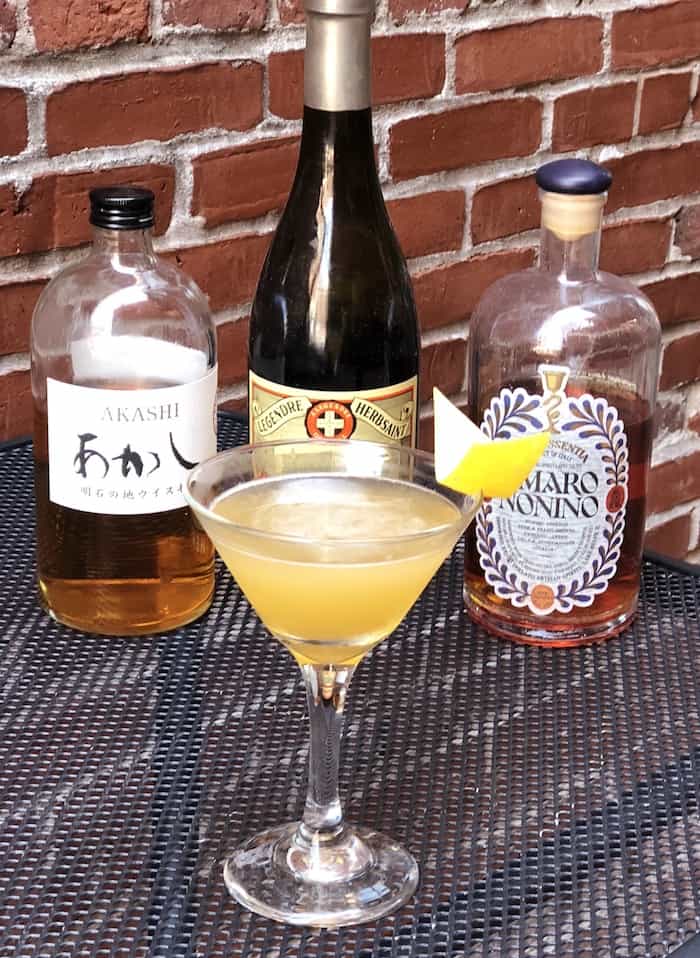 For T.J. Palmieri, owner and operator of Madrina’s in Gainsville, FL, the Penicillin is a “great cocktail that highlights what a blended Scotch can do,” he says. “It’s an assertive yet refreshing cocktail that plays well all year round!” As a result, he decided to blend it into a frozen concoction for an outdoors event during summer in Florida.

Blend ingredients until creamy. Garnish with an orange twist flower.