Few drinks are as potent—culturally or physiologically—as the boilermaker. That iconic combination of a pint of beer and a shot of whiskey has been crisply marking the end of the workday for generations, tipping its hat to blue-collar traditions while segueing seamlessly into the hipster lexicon.

But unless you’ve recently been transported here via a time machine from 1970, you’re probably well aware that contemporary beer is, well, a little different than what our granddaddies were drinking. Classic American lager is a foolproof boilermaker building block, pairing well enough with pretty much any whiskey you can throw at it. Crack open a Highlife, pull down a bottle of bourbon—any bourbon, really—and boom, you’re in business. But finding the right spirituous companion for a kettle soured pineapple beer? That’s a different kind of challenge.

At Stormbreaker Brewing in Portland, Oregon, pairing craft beer with spirits has become an obsession. Sure, there’s a boilermaker section on the menu (doesn’t every bar have one these days?), but they also play annual host to the Brewstillery Festival, a beer fest that pairs local breweries with local distilleries to make creative boilermakers of every kind.

Brewer Tyler Montell says there’s no hard-and-fast formula for making a great new-wave boilermaker, but like any pairing, keeping balance in mind is key. “You want to make sure you don’t mute the flavors in either the beer or the whiskey,” he says. “They’ve got to work together.” Dan Malech, Stormbreaker’s co-founder, says the experimentation is all part of the fun. “It’s the ultimate trial and error project,” he says. “You can tell right away what works and doesn’t.”

So, in that same spirit of inquiry, we decided to put three modern beers to the test, choosing a hazy IPA, a sour fruit beer, and a brettanomyces saison to represent the new wave of craft beer. Then, we threw open the doors to the liquor cabinet with one question in mind: how would these funky, flavorful beers pair up with whiskey? Here’s what we found out. 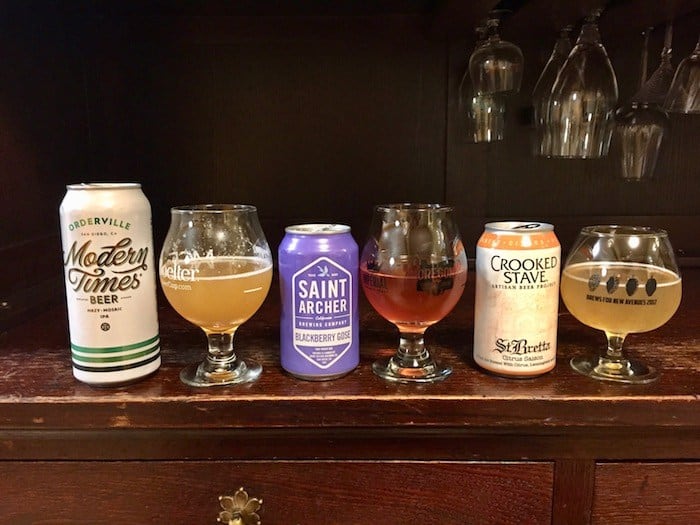 This hazy IPA is brewed with two different hops: Mosaic, a popular contemporary hop varietal that gives beers a tropical taste; and Simcoe, a sticky, resinous hop with relatively high bitterness and a piney flavor. It’s not as hazy as some of the new crop of super-juicy IPAs, but it’s definitely opaque. On it’s own, it tastes a little like bitter orange juice, with an earthy citrus flavor and heavy mouth feel.

Cooper’s Craft wasn’t a great partner, amplifying the bitterness in the beer and flattening the sweetness of the whiskey. Jack Daniels was a little bit better, but still didn’t make an obvious match. But High West Valley Tan was a surprisingly effective pairing that brought out the sweetness in each drink, while the banana esters in the whiskey amplified the tropical notes in the beer. Even better was a 100% oat whiskey from Stonebarn Brandyworks, a combination that somehow created the dead-on flavor of a citrus-glazed donut. I suspect Koval’s 100% oat whiskey would work the same way—interesting, as many hazies use oats to amp up mouthfeel.

Pouring a muted pink, this beer was very tart, with a subtle blackberry flavor, keen lemony edge, and salty undertones. It’s hard for me to imagine drinking an entire pint of this, but maybe with the right whiskey?

Unfortunately, nearly everything we tried fell flat. I thought an herbaceous rye might pair well with the fruity elements of this beer, but Few Rye and Michter’s Toasted Rye both made the beer taste as sour as lemon juice. Sweeter whiskeys fared a bit better, with Slane Irish Whiskey outperforming Crown Royal XO.

It wasn’t until tasting this alongside a pour of Olmeca Altos Reposado tequila that it became clear just how to pair sours with spirits. The tequila paired beautifully with the tartness of the beer and amplified its subtle fruit flavors while providing a much-needed reduction in perceived acidity. Lesson learned—when it comes to sours, skip the whiskey and reach for the agave spirits.

Brettanomyces—a variety of yeast—is thought of as a flaw in wine circles, but valued for its ability to bring funky, farmhouse-y flavors to beer. It’s a traditional component in many Belgian and French beers, and it’s everywhere in the American craft beer world. This beer was quite tasty on its own, a light, refreshing, slightly funky saison with gentle citrusy notes.

Nothing we tried with this beer was bad. Sloan added a nice note of sweetness to an otherwise rather austere beer, bringing out lots of grainy, bread-like notes. Jack Daniels also amplified the sweetness, with a clear fruit component. But the clear winner was a surprise: Talisker 10-year-old. I worried that the combination of peat and brettanomyces could get a real hospital-on-fire vibe going, but that wasn’t the case. Both are light but flavorful, with well-matched sweetness levels so neither overshadowed the other.

The most important finding of this experiment? When pairing modern beers with whisky, try thinking about the flavor combinations you know and love from cocktails. In the cold light of day, two of the three successful pairings pulled flavor elements directly from cocktails: the Margarita (tequila and citrus) and the Penicillin (peated Scotch and lemon). The oat whiskey and hazy IPA combination succeeded based on a textural affinity—creamy, viscous mouth feel—combined with a shared tropical quality. As when creating any pairing, the ability to build a bridge between flavors is the true key.