“We’re thrilled to be releasing this first-of-its-kind Whiskey Kringle for fathers and single malt whisky lovers around the country to enjoy,” said Eric Olesen, third generation co-owner of O&H Danish Bakery, in a prepared statement. “We thought Highland Park was the ideal partner when we looked for a new offering that would taste great and appeal to dads this Father’s Day.”

The Whiskey Kringle, available now in the bakery’s locations in Wisconsin and online for delivery for Father’s Day, features O&H’s classic pastry filled with a Highland Park Whisky infused caramel and topped with buttery streusel. The pastry is then coated with a honey whisky glaze and topped with a smoky drizzle of vanilla icing. 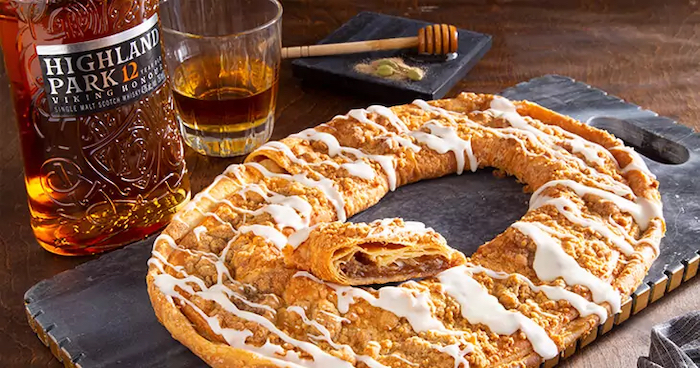 O&H Danish Bakery was started by Christian Olesen, who emigrated from Denmark in 1924 and created the bakery 25 years later. The bakery is now run by the third and fourth generation of the Olesen family. It was recently featured in the New York Times 2019 Holiday Gift Guide, showcased on Food Network’s ‘The Best Of’ program and had its Kringle named Best Bakery Item in Trader Joe’s annual Customer Choice Awards.

Highland Park, for those who don’t know the brand already, is a single malt Scotch whisky from Orkney, a remote set of islands off the far north coast of Scotland. Established in 1798, Highland Park draws influence from its sherry-seasoned oak casks, Orkney’s unique treeless environment and more than 220 years of whisky-making craftsmanship to create its single malt Scotch whisky.