The family known as Beam has roots that run deep in Kentucky bourbon history. But perhaps the most notable Beams are those who have walked the halls and manned the stills at the namesake Jim Beam distillery. Despite the fact their bourbon making facility is an extremely large operation these days and owned by an international spirits giant you can still register the measurable impact current master distiller and Beam descendent Fred Noe has on the day-to-day decisions made there.

Following in the footsteps of his father and preparing to likely take over the family mantle someday is Freddie Noe. He’s been around the grounds of the distillery all of his life, and now works there learning the ropes as his father and grandfather did before him. Part of this process involves the creation of his own first whiskey, known as Little Book. We recently had the chance to sit with Freddie Noe at a Little Book tasting and chat with him about his whiskey and his place in the Beam world. Note this interview has been edited for clarity and brevity. 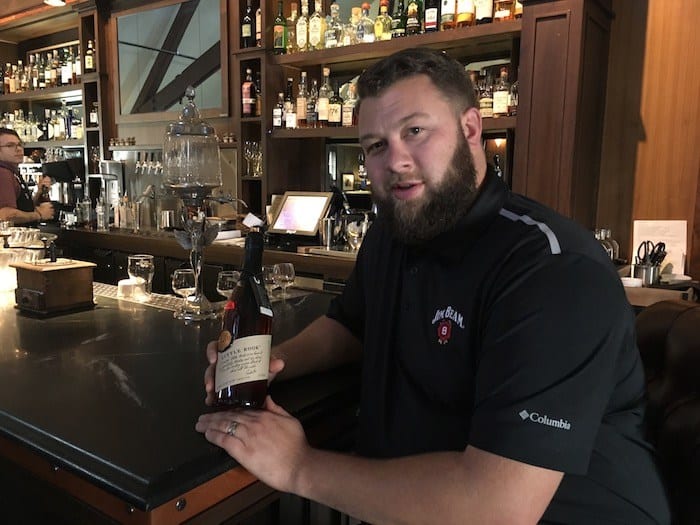 Freddie Noe and his whiskey (image via The Whiskey Wash)

The Whiskey Wash: We’re talking a little bit today about Little Book and the first release from that and your transition in the Beam family into more of a role at the distillery and all the things that go along with that. You’ve obviously grown up around whiskey, around bourbon. You’ve grown up in one of America’s most celebrated families in this particular product line, this particular product world. What’s that like?

Freddie Noe: It’s kind of funny. I get that question a lot. Even the way I’ve got a daughter. She’s eight, and the way we treat her is the same way I was treated and the same way my dad was treated, you just be a kid. Growing up, I was just a typical Bardstown kid. I liked riding bikes with my buddies, playing sports. I was probably 11 or 12 when I kind of realized that Jim Beam meant something to our family. I knew before that he was my relative, but I never really made the connection. Then, as I was getting into my teenage years, I started to realize the impact my grandfather had on the industry and the one my dad was starting to have at that time, but I never got pressured to come into the business. It’s just something that growing up around the distillery, I went fishing a lot with my grandfather. He would show me around the distillery, show me around the grounds, but it always ended with a fishing trip, so I was always excited to go to the distillery. It’d kind of become like a second home to me.

As I got older into my late teen years and granddaddy had passed away, really what kind of made me start really thinking about coming into the industry was at his funeral when I saw the thousands of folks that came through just to pay their respects to him. He was granddaddy to me, but he was a big, big man to everyone else. He did a lot for the industry and he was always full of life and full of stories. Just hearing all those people talk about it, it means a lot to me to be able to continue on the family tradition and tell the stories of times I had with him and the ones I’ve heard from some of the workers that worked with him.

It’s been really great and I enjoy it, but like I said, no pressure to come into the business. It’s almost kind of natural. If it’s something you’re around all the time and you’re not pressured to it, you’re kind of just attracted to it. It kind of happens.

TWW: When did you take your first distillery job?

Noe: I think I was 19, about to turn 20 and dad had came home and asked. Someone in the corporate office had sent him an email and said, “hey, we know your son’s in college. Does he have any interest in coming into the industry?” He came home and asked me and I said I was interested. At that time, I did two internships, one right when I turned 21 at our Deerfield offices during a marketing internship for about five months and then about two years later, I did another internship at the plant.

I did the special projects coordinator job where I went around to each place. That second internship at the plant, was the one that really triggered me wanting to learn everything because that’s kind of what I did. I spent half the week working at the tasting room in our still house at the time. It was just the outpost, as we called it. Then the other half of the week, I spent two or three days in the plant working in each department, just kind of literally getting a very brief overview. I’ve been full-time for over five years now.

TWW: As a child, what was your best memory being at the distillery?

Noe: I would say probably that it was that I had a chocolate lab when I was a kid that my grandfather had gotten for me that was the same age as me. He went everywhere with me and granddaddy. Granddaddy retired from production when I was five, so every summer, we were together all the time. Some of my fondest memories are just that we would go down to the distillery, he would kind of check on the stills and see how the whiskey was doing that day, and then sometimes we would just walk around and just check things out. I remember very vividly, one fall afternoon, me, him, and the dog walking from at the plant where Fred’s Smokehouse is now. Before, it was just a grassy hill right there, and I remember me and him walking down the fence line by the cistern room where they were rolling out barrels.

It was just a beautiful day and just me and him kind of just shooting the shit, just kind of spending an afternoon together. I don’t know if he was trying to groom me for coming into it just by having me down there and just showing me how beautiful it was and just spending time with me down there, but I would say that’s probably one of my fondest memories, just walking along with him and not really talking about anything in particular, just, “Look at that tree,” or, “Look at that bird over there.” Just stuff like that, but just spending time with him walking around there. I really cherish those moments now.

TWW: What does the Beam legacy mean to you?

Noe: To me, it means a lot, obviously. It’s such a big part of my life. I mean, hell, it’s my family. It’s hard to really put into words what it means. Working with my dad and learning the craftsmanship that’s been passed down from generation to generation and the attention to details in the quality of our products and just doing things the right way, not taking shortcuts. To me, that’s what the legacy kind of stands for, is we’ve done things the right way and we continue to do that and we pass that on from generation to generation, whether it’s just from always being honest with folks. If you get asked a question, be honest, especially in today’s world. People can Google something quicker than I can answer a question, so as long as you’re honest, no one can take that from you.

Another thing is just always making sure that when you’re with consumers that you take the time to thank them. I mean, everyone always comes up and thanks me for making Beam and continuing on the legacy, but I mean, to me, saying “thanks” to the consumer is what lets me do what I do. If we didn’t have our consumers, I wouldn’t be able to make whiskey or talk about my family history and continue on that legacy.

TWW: When you think about Little Book, that is maybe one of the first steps of your contribution to this legacy. Talk a little bit about that whiskey and what it means to you.

Noe: Little Book means a lot because it is my first release. It’s kind of me paying homage to my grandfather and that relationship that we had. The bottle is very similar. The package is very similar, but the liquid … a lot of people ask, “What would your granddaddy think?” I think he’d be very proud. What he did with Booker’s and the small batch collection, I wouldn’t say that Little Book is near the magnitude of that at this stage, but just creating something that people like, something that people can enjoy, something people can talk about.

TWW: When you think about what you’ve made Little Book to be, what was your inspiration for wanting to do something more blended versus something that was straight bourbon?

Noe: I didn’t really set out or have any intention of my first product being a blended whiskey. It’s just I’ve got a very inquiring mind. I’m always thinking about how we can do different things and if it makes an impact on the whiskey is this is a good impact or can we at least learn from it? I was thinking “what would happen if you blend the three components of grain as the liquids instead of grain?” It just kind of morphed from that.

I didn’t particularly set out for a blended whiskey. I just knew that I wanted to release something that people could enjoy.

TWW: Think to when you’re going to be your father’s age. When you look back, what do you want that legacy part of you to be?

Noe: Definitely the most important thing is that I nurtured the business and passed it on to the next generation, whether it’s my daughter or if we have any other children or a cousin or whoever, but just making sure that I continue to do things, like I said, the Beam way, the way I was taught from my ancestors, from my dad and my grandfather, etc.

Obviously, a lot of it is just anything that I create or come out with is something that people enjoy and people can talk about. That’s what it’s all about to me – creating products or whiskeys, whether it’s bourbon, blended whiskey, or anything, that people can talk about, have a good chat over a drink, just enjoy themselves and relax. That’s what we like to do when I’m away from the distillery at home. Me and dad, we have a drink quite often. I just moved into the house beside him, so we’ll probably have more drinks together now, but we just relax and enjoy company. I think that’s what our products are meant to do, just relax with your friends or your family and enjoy and be enjoyed.