There are plenty of reasons to have a little nip of whiskey every day or two: it’s clearly a body tonic, a tight tingle for the senses that confirms the warmth of existence, a knock on the noggin that opens the brain’s door to deeper thinking and perspective.

But on a day like St. Patrick’s Day, a wee dram is more than a heedless chug—having a thoughtful tipple on St. Paddy’s is an affirmation of the spiritual balance of the universe. We don’t want to swim in an ocean of stereotypes, but it’s acknowledged the Irish know their way around a glass. But it’s not that the Irish are over drinkers—nay, they are skillful drinkers.

To be plain, if my declaredly British name undermines my street cred here, know that my mother is Eileen O’Brien, and her mother was a Kelly. Deny my piece of the old sod, and mom will get rolling on her walker and chase you down.

That settled, to business: the best way to apply the spirit of St. Patrick’s Day is to apply the spirits—Irish whiskey, of course. There are many fine Irish distillates, but my favorite is Redbreast 12-year-old, distilled in Cork, Ireland, a place name befitting the bottle. There are a few variants of Redbreast, up in age and price, but the 12-year-old single-pot-still production, sherry-cask aged, is a balanced, rich and fruity quaff; this is whiskey with weight. 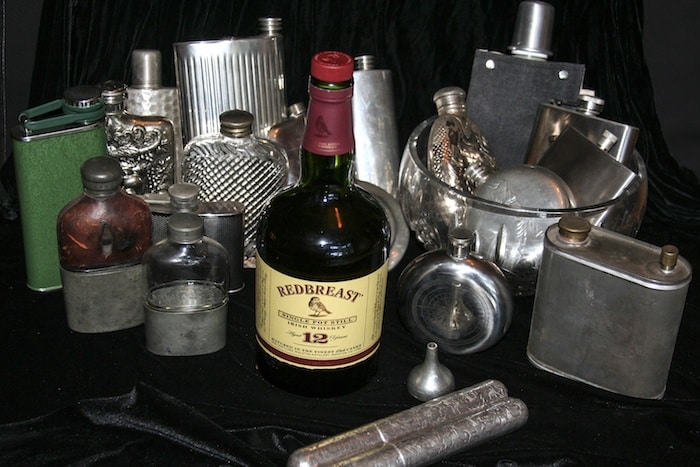 So, St. Patrick’s Day. First things first: Green beer? Just say no. (And then run.) Having made your preparations the night before, you have your fresh bottle of Redbreast at the ready. How ready? You hang it by rope or twine, hook or by crook, above your bed at top-of-head level. This way, when you get up to pee in the dawn hours, it’s the Irish that really wakes you.

Of course, set it up so it’s just a glancing blow, a soft rap on the skull, to remind you of your stellar day ahead. Reward yourself by a quick uncorking and a deep inhale, just to clear your sinuses. (But good god people, don’t guzzle any before breakfast; there are rules of civility to abide.)

Now you must plan how to transport the golden liquid with you, for renewal and succor through the day. Sure, you could just tote the whole bottle about in your backpack, or perhaps suspended on your chest with a lanyard, but that’s uncouth. Besides, other celebrants will see that you are carrying Redbreast, and they will besiege you so the vital supply will run low before they day is done.

The thing to do, both classy and sassy, is to carry your on-the-go grog in a flask. You’ve probably seen those umbrellas that unscrew at the handle to reveal a hollow designed for booze, or those binoculars with a removable fake lens giving access to a drink chamber, but those are only for pretending you’re in the CIA. No, you need a nice hip or pocket flask, preferably something stylish, discreet and unmoldy.

Most modern flasks are made of stainless steel, though older ones are pewter, or even glass. I have a couple in my small collection that are pewter, leather and glass, and might have been used by one of the Crusaders. Make sure you give yours a good rinse before filling. Because I’m a good Boy Scout, I have a couple of tiny funnels to fill my flasks—it’s easy to over-fill, so don’t be too eager: precious drops must be spared.

Some ground rules: if you are going to have a couple of St. Paddy snorts before lunch, be modest. And be a walker or a bicycler, not a driver. This is a day to celebrate, not to mend bones. However, before you attend any parties, go somewhere green. They don’t call Ireland the Emerald Isle because it looks like the Sahara.

Park It (And Then, Once Upon a Time)

Even if you can only go to a public park, get thee to the green. Settle against the base of a fine oak and mull on the goodness of bagpipes, shamrocks and leprechauns. Toast the woods, toast the sky, and toast my mother.

After your solitary idyll, seek the company of friends. It’s time to spin a yarn or three. The Irish, the people of Yeats and Wilde, of Joyce and Beckett, are wordspinners, and delight in a tale told. Let the Redbreast unstick your tongue—fetch up your best blarney and trot it out amongst your peers. Defend your honor (though no fisticuffs!), paint the air with castles, let them know you went to Loch Ness and looked Nessie right in the eye. [Clarification: we all know that Loch Ness is in Scotland, but there are no borders between friends.]

If possible, as the night moves down, sit near a flickering fire: your friend’s faces will soften, the laughter will rise, and the Redbreast will fall. Give a good huzzah when the bottle is drained, and make sure that everyone gets a lift from Lyft rather than putting celebrants behind wheels.

At night’s end, put a candle in the empty Redbreast bottle, put it in your room where it can’t fall over, catch anything on fire or drip wax onto your precious stamp collection. If you’re lucky, somebody kissed you because you are Irish, or because you pretended to be. Either way, you’re golden and you will sleep like an Irish baby. Or a potato.

Read More Whiskey News
Brother’s Bond: Bourbon Is Thicker Than Blood
[Note: we really do recommend the glories of Redbreast and other fine Irish whiskies, and toast you in turn if you want to lift a glass on St. Patrick’s Day. But do keep your wits about you in regards drinking buckets of the stuff. You’ll tell better stories, you’re more likely to get kissed, and the morning after won’t open at the gates of hell.]
417
Shares
701
Views
Share on FacebookShare on TwitterGet Our Newsletter
Get Woodford Reserve® Double Oaked Bourbon at ReserveBar. Shop now!