Want to make your American whiskeys taste better? Pair them with cured ham—preferably what Southerners call “country ham.” Never heard of it? Just imagine prosciutto that’s been smoked and you’re there.

I stumbled onto this combination years ago while proofing the manuscript of my first book named, not ironically, “Country Ham: A Southern Tradition of Hogs, Salt & Smoke.” I was hungry and went to the fridge for some paper-thin slices of country ham, and on my desk was a bottle of bourbon likely queued for a later review. While I chewed the ham, I absentmindedly sipped a little bourbon, and instantly, the combination blew across my palate: salty, complex, lightly smoky and aged-funky ham notes commingled with the whiskey’s caramel and brown sugar flavors. Friggin’ amazing! 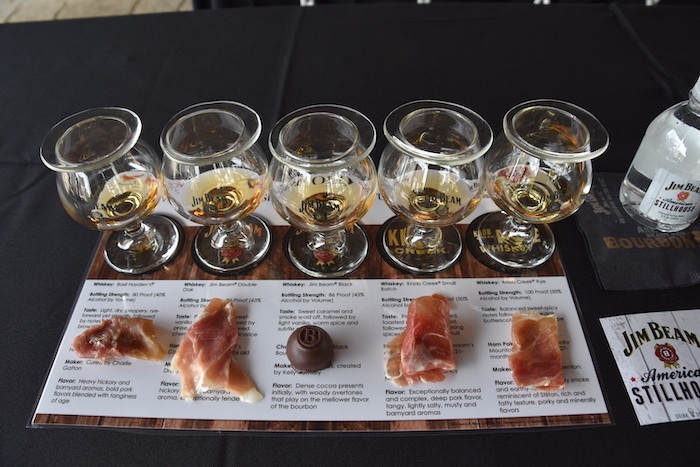 Six months later, I convinced the creators of the Bourbon Classic in Louisville to let me lead a seminar on how cured ham and whiskey play well together. Megan Brier, a brand ambassador at the time for Jim Beam, was my co-presenter, and the supplier of multiple Beam whiskeys, including a Booker’s stone-fruit bomb and a bright, peppery Knob Creek rye.

During the seminar, we walked the 62 attendees through a tasting of lower-proof-to-higher-proof Beam whiskeys and discussed why each paired well with each ham. In the audience that afternoon was Jim Beam master distiller Fred Noe. He shared with the group how he’d grown up curing country hams with his father, Booker Noe, but said he’d never paired country ham and whiskey on purpose. That event changed him and everyone else in the room. Five years later, I led another whiskey and food pairing at the 2020 Bourbon Classic, and the event attracted 156 attendees. People dig it!

Only five U.S. states still produce country ham on a large scale: Kentucky, Tennessee, Virginia, North Carolina and Missouri. Most country ham companies are operated by multigenerational families whose brands date back many decades into the 20th century.

For centuries, the weather in these states was ideal for “ambient curing,” meaning meat could be salted, stored safely outside in during cold winters and allowed to age through one to two summers. In all these states, temperatures will swing 100 degrees between winter and summer, which is ideal for ham curing (though the warmer winters of the new millennia have made it a risky business to cure outside). Aging under those conditions firms the meat and adds incredible flavor complexity.

Similarly, American whiskeys made in the same geographic area become more complex due to the extreme temperature swings that force whiskey deep into the wood of the barrel in the summer, and let it filter back out in the winter.

Here’s why country ham and whiskey work so well together. Bourbon and rye deliver high-proof alcohol that penetrates straight to the palate regardless of what food was just eaten. Cured hams, and particularly fatty ones, alter those whiskeys’ flavors favorably as they migrate through the food or residual flavors left on the palate.

The effect of the whiskey on the palate creates a cleansing sensation that makes the tongue tingle while awakening it to detect other flavors made available. For me, those classic notes of caramel, citrus, smoke, honey, grain, dark fruits … and on and on … make it hard to find foods that don’t benefit from a sip of whiskey.

Do this at home. Please!

Since that first pairing with just country ham and whiskey, I and some industry colleagues have added smoked salmon, pastry, chocolate truffles, caramels, hard cheeses, smoked brisket, smoked ribs, cookies and much more to our pairings. Experimentation is strongly encouraged, but following these basic suggestions for getting started is recommended.

Fat’s where it’s at! Coating the palate with the fat of ham, chocolate, cheese, salmon, etc., is essential to a good pairing. When the alcohol arrives, you’ll feel it convert that fat and those flavors into something magical.

High proof isn’t foolproof. One-hundred-proof and higher whiskies bring real excitement to pairings through their bold flavors. Pairing smoked brisket with high-proof rye or rye bourbon will change your life. Still, one of my favorite pairings ever was created by a colleague who convinced our team to smash a small piece of mild bleu cheese onto a wafer of milk chocolate and wash it down with Michter’s 83.4 proof American Whiskey. That combo is pure magic!

Steer clear of really spicy foods. I once tried bourbon with spicy chicharrones, and it set my mouth on fire. Jalapeno and habanero peppers … only a sadist would suggest those.

Set some limits: If you host a pairing at home, limit the combinations to five or six to avoid palate fatigue. At the end, however, have few extra bites and pours so people can revisit ones they liked and create their own combos.

Add something sweet: If, as in the picture, you’ll be tasting multiple salty hams, add a sweet intermezzo to break up those intense flavors. Milk chocolate is really nice, but a chocolate truffle is best.

Back to country ham: Following are some of my favorites and which you can order online. Some sell ham already sliced paper thin, a.k.a. “prosciutto style,” while you’ll need to ask others specifically to do it. If you have a source for great European cured hams such as the venerable prosciutto from Italy, or Spain’s arm-and-a-leg pricey Iberico or the more affordable Serrano, get them. All will be delicious, but to my palate, the smoke notes of a great country ham makes for an unrivaled experience.