Column: To You, Whiskey Community, With Love

If you’re tuned in to any bourbon or whiskey social media, you’ve likely seen a fundraising post. These take many forms, from bottle raffles to portion of proceeds from private selections to flat requests for cash donations. Fundraisers often times give followers or members of groups an opportunity to get their hands on a special bottle for a donation to a specific cause. Nonprofit groups close to the poster’s heart are often the recipient of these gifts, but sometimes it’s an individual in need of help.

I was recently one of those individuals.

I know I spend a lot of time slapping the hand of the broader whiskey community for ways that we can be better. But being a community is something that we’re just really damn good at doing. Participating fully in the care and concern for each other’s lives is on display daily, in between the crotch shots and ISO posts. People are out there showing humanity amongst the bottle kills and unicorn sightings. 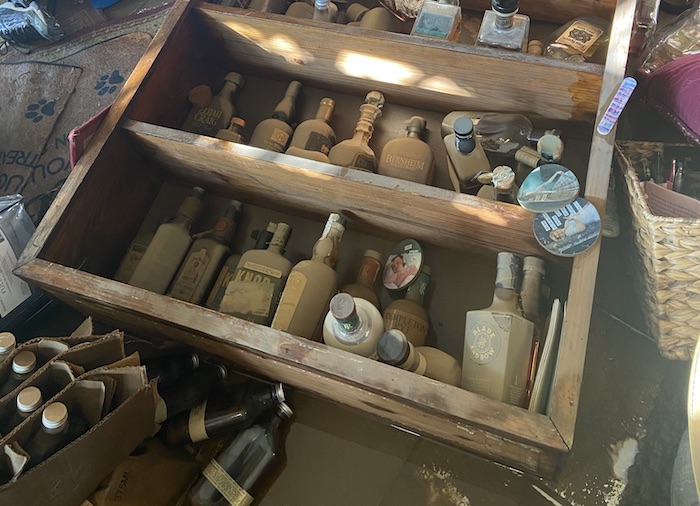 To be on the receiving end of such abundant generosity is nothing short of humbling. Perfect strangers finding my situation not only worth their attention but also worthy of opening their wallets is… well, it’s overwhelming at the very least.

In the very early hours of March 28th, I awoke to my house filling with water. By the time the sun came up, five feet of flood water occupied the bottom floor of my home. Gone was my office, my car, my whiskey collection, my library, my many notebooks full of scribbles from every interview I’ve ever conducted, every memento from years of visiting distillers, computers, hard drives backing up computers, and did I mention the whiskey? All ruined by a toxic mixture of water, mud and god-knows-what. Videos from inside my house opened the national news that night.

If that wasn’t quite enough, in the midst of that shock and grief, I lost my beloved grandfather a few days later.

But something truly incredible was happening in the background. The whiskey community sprang into action. A woman I’d only met once for a few minutes, months before this, started a fundraiser. For me.

While I was oscillating between cleaning the muck out of my house and making funeral arrangements, Annie was posting in every bourbon group on Facebook, telling my story, asking all of you for help on my behalf. That act was, on its own, more than I could fully process. And then this community started posting raffles and fundraisers and they were for me. To say it was humbling barely touches the surface of emotions.

It’s been five months now and I wish I could say I’m on the other side of the tribulations. I’m not. What I am is grateful. I’m appreciative of the financial help to which so many of you contributed. Those first few weeks would have been next to impossible without that help. I’m so thankful for the outpouring of support. It came from across the country, from friends, acquaintances, students, social media connections, and strangers alike. I’ll never be able to properly thank each individual that stopped what they were doing to call or text or message or donate when they saw my predicament. I hope you find my gratitude here. I am so very, very grateful.

Above all, I’m grateful for the ability to now scroll through social media and focus more on the good work this community is doing and perhaps a little less on the flexes of your “score in the wild.” Some groups exist solely for the purpose of fundraising and others incorporate their efforts locally. Please check out Bourbon Charity and Angel’s Share as two great examples of how capable this community is of coming together for a cause.

Next time you see a fundraising post, maybe you’ll stop and donate the cost of your affordable, easy-to-find, daily drinker and know that I’m cheering for you.