A bill filed in New Hampshire by eight legislators seeks to make “hobby distillation of liquors” legal. If it passes, it’ll be the second state (behind Missouri) to allow distillation of spirits outside of a licensed distilled spirits plant (DSP).

Under federal rules, hobby distilling is not allowed, so how Missouri gets a pass and New Hampshire will join it … we’ll save that for another column. The point of this exercise is to examine why it’s not allowed everywhere and why most of us won’t care if it’s ever legalized.

Since 1996, New Zealand has been the only place on Earth where home distilling is legal. You can make it at home, consume it there and serve it to others. But Kiwi home distillers best not sell it or even move it beyond the walls they own. According to one distiller I interviewed for a book I wrote titled, “The Home Distiller’s Guide to Spirits,” they can’t even hand a drink over the fence to a neighbor. 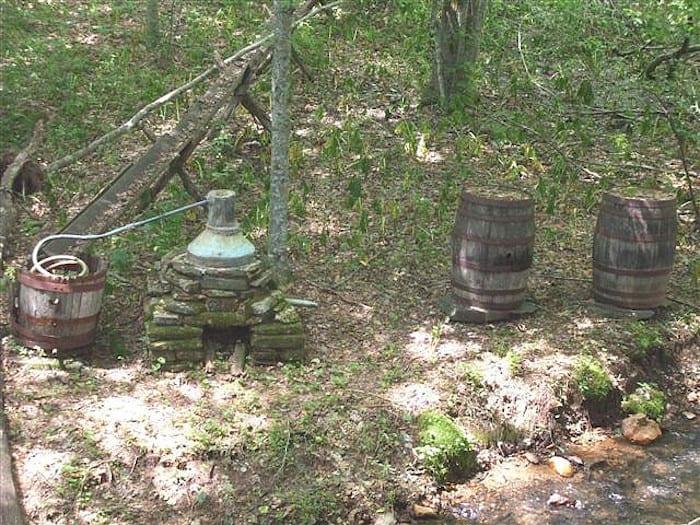 How home distilling is often seen today (image via Dave/flicker)

Back to America. Why can’t hobby distillers practice their craft freely like beer and wine makers? The answers aren’t complicated. Just follow the money.

Of the numerous chemicals yielded from distilling grain, methanol is the worst. Consumed in large amounts, its poisonous and potentially lethal. However, the amount of methanol generated from a single distillation run—especially on a hobby still set—is not only small as a percentage of the total yield, it’s easy for a distiller to eliminate safely since it’s the first alcohol to boil off the still.

The reason why we occasionally read reports of methanol poisoning from homemade hooch is because unscrupulous distillers deliberately collect that methanol, blend it with other non-potable alcohols, package it and sell it as safe. Methanol poisoning never happens by accident.

In other interviews for my book, professional distillers told me that even if a hobby distiller were too lazy to cut the heads (methanol) and tails (a whole slew of nasty chemicals) from a distillation run, the result would be horrible tasting whiskey that would leave consumers with dreadful headaches and roiling stomachs—but not blind or dead.

Regarding still explosions: There’s so much information in print and on the web on how to make spirits safely at home that any adult should be able operate a still correctly when proven safety guidelines are followed. Will there be accidents? Of course. Life happens and, if you ask skilled hobby distillers, you can’t fix stupid. Explosions, they add, are the result of carelessness. (The American Home Distillers Association website is loaded with great info.)

Why, oh why make it at home?

Though one source I interviewed for the book in 2015 estimated there were 200,000 hobby distillers in the U.S., I don’t think many more would pick up the hobby—and stay with it long—if it were suddenly legalized. When it was legalized in New Zealand, makers of home distillation equipment predicted sales would soar, but they remained flat because the people who’d been buying those tools all along merely came out of the shadows. Commercial distillers also feared home distilling would cut into their sales, but that never happened for the same reasons.

He’s why I think little would change here either.

* I should point out that many distillers I’ve spoken to (especially those who learned to distill illegally on their own) like drinking new make. They’re the exception, not the rule.

And once you’ve got that gallon of new make, what will you do with it? Drink it yourself? Look at it this way: Drinkers who sip spirits neat generally pour 1 ounce at a time. So, will that hobby distiller really want 128 pours of new make? Will he or she turn it into a flavored “moonshine”? Maybe.

And if new make tastes so great, why do many home distillers cover its flavors with fruit and spices and dilute it? I have yet to enjoy any of the many versions of apple pie moonshine.

One hobby distiller I know takes the half gallon of whiskey his still yields and adds it to a 3-gallon barrel to age. Given the quality of wood used in those mini-barrels, it likely won’t be good. But he likes doing it, so have at it, friend-o!

Using the math above, that means a rough yield of 10 to 20 gallons of new make per year. At 10 gallons, one person can make 37.85 liters of liquor (prior to proofing down). That’s a lot of liter bottles!

Who wants that much new make? Distillers who want to sell it illegally, obviously. But the average hobby distiller won’t make or consume that much.

It’s estimated that 2,000 farm distilleries were in operation in 19th Century Kentucky. Two thousand! In one state! Just imagine how many thousands more across the U.S. were distilling their excess grain and fruit to trade, sell and consume at home. Yet despite all that home distilling and drinking, the nation thrived and grew.

Bottom line: Americans should be allowed to make whiskey as a hobby, but given the convenience and cost of the good stuff already available, few if any who aren’t making it now will do it at all. I certainly won’t!