Out in the Cold: An Hour-By-Hour Account of the 2017 Stranahan’s Snowflake Release

How long would you wait in the cold for an ultra rare whiskey? An hour? Three, maybe? What about more than 72 hours? That’s how long some of the ultimate fans of Stranahan’s Colorado Whiskey, known as “StranaFans,” waited this year for their bottle of Snowflake.

Snowflake is the annual limited edition Stanahan’s bottling blended from different warehouse cask selections that sells out every year at the Denver, Colorado, distillery the morning of release every first Saturday of December at 8 AM. For the past few years, the demand for this bottle has gotten so high that the only way to purchase one (through legal channels) is to line up outside the distillery. Each bottle is numbered, and every year, the most diehard StranaFans show up earlier and earlier to snatch up the first few numbered bottles.

I was invited to join the Snowflake line this year and experience the thrill of anticipation, as well as quite the distillery tailgate party, despite some pretty icy toes by the end of it all. 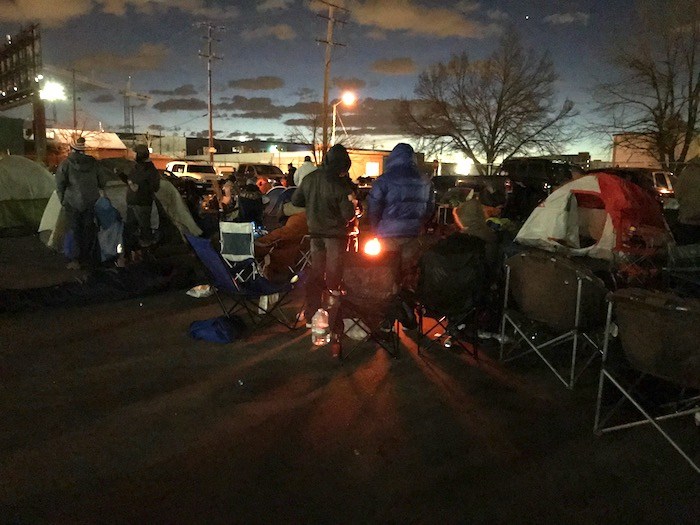 There is already a vast line of tents and makeshift barbecue setups snaking around the distillery. Thanks to climate change, the daytime temperatures in Denver this week have been consistently climbing to the high 60s, so people are comfortably hanging out in short sleeves and mingling outside. I am a little disappointed it isn’t colder. Isn’t part of the drama supposed to be how cold it is waiting for this thing? However, later I will learn that the temperature will plummet a good 30 to 40 windy degrees as the sun goes down a little after 4PM, thanks to the snow-capped Rockies in the distance.

Tickets are issued the next day at dawn, and there are only as many tickets as there are bottles available for sale – this year, about 1400 – with a two-bottle limit per person. There is something called a “fire line” demarcated by a grill behind an actual line drawn in the pavement – no fires can be lit beyond this line, since the location is so close to flammable materials at the distillery. It’s also become a StranaFan’s line goal – a spot before the fire line guarantees a bottle. Others behind it might be waiting for hours and not even get a ticket.

Master Distiller Rob Dietrich gives a tour of the distillery, Having worked his way up since the beginning, he took over this position in 2011 from Jake Norris, who founded the company with Jess Graber in 2004, and together were the pioneers of the Colorado distillery boom at the forefront of the American Single Malt whiskey movement.That’s around the same time the Snowflake line became such an event. Says Dietrich, “I started creating in-house blends of different cask-finishes. Before that, it started out as just a busier-than-usual day in the gift store, then a handful of people started waiting for the store to open, then it just continued to grow each year. It’s been exciting to watch throughout the years as the organic growth of the line kept increasing in size, earlier and earlier.”

As Dietrich shows us around the house – the machinery, the sleeping barrels, the tiny, original still that produced the whiskey back in the day – he explains what this annual event means to him. He’ll be up all night this Snowflake Eve, and among his many duties, will be walking the line in the middle of the night to chat with the StranaFans waiting out in the cold. “[This whiskey] created a whole community, people who have met on the line… I want to make sure I am supporting them as much as they are supporting me.”

We are treated to a sneak peek taste of Snowflake #20 Quandary Peak (each is named for one of the 14,000-foot + Rocky Mountain peaks), which comes together this time round from two-year-old straight whiskeys finished in a variety of barrels – three distinct rum casks, a Cognac, a Madeira, a Sangiovese, and a Port cask. Sounds like a crowd, but the whiskey manages to be elegant, warming, chewy and tangy without being too fussy. I’ve never tasted anything like it. And that’s the point.

I was curious to know if Dietrich had ever scaled any of the Snowflake peaks himself. “I have skied the 10th Mountain Hut trail with the original veterans from WWII when I was a soldier in the 10th Mountain Division,” he says, “but most of those peaks were around 12-13,000 foot peaks. I’d love to climb a 14er near one of those huts and make a several day trip out of it.” As for next year, “I have considered climbing the next Snowflake 14er before the next release, as it will be warmer in the summer than in the winter. I just have to pick that name well in advance of the release!”

Any thoughts I had the day before involving the words “balmy” and “warm” are a distant memory. The air around the distillery is so dry and frigid it feels like one could shatter it with a pick. Many StranaFans are sleeping in their tents or cocooned in sleeping bags, but quite a few are up partying in the main tent where a live bluegrass band is playing and whiskey cocktails are pouring. Food trucks R & D empanadas and Dope Donuts flank it on either side. People are keeping warm playing rounds of cornhole. Because of the two-bottle limit, StranaFans bring spouses and line buddies. They even bring their dogs to keep them company (they don’t get a ticket, however. Nice try).

At the front of the line are Mike Kerchhoff and his friend Darek Heydn, from Wisconsin, who this year managed to knock longtime ultimate StranaFan Russell Cowdin from Grand Junction out of his coveted Number One position. Until now he has held it for three years and has been in the top 10 seven times, making this his ninth release, including the period when Snowflake was released twice a year. Kerchhoff also brought his wife, and there are flickers of annoyance flashing across Cowdin’s face as Kerchhoff describes his strategy for arriving first in line, having beat him out by less than an hour on Wednesday (last year they all got there Thursday, Cowdin first, and each decided independently they needed to step up again). Because of the size of the party, not only will Cowdin not have the first numbered bottle this year, he won’t even have the sixth. Still, there are moments he is clearly happy for the attention, and there is obvious camaraderie between the rivals too.

Over the years they have graduated from camping out with simple sleeping bags to setting up tents to arriving in a more comfortable trailer that can better stand up to the elements. They bring other bottles of whiskey with them to share on the sidewalk as they pass the time, but they are quick to point out they’re respectful and things never get out of hand. “We’re not breaking anything, we’re not hurting anybody… they love us.”

What do such avid fans do with the bottles after all that waiting? Traditionally one is opened on the spot to celebrate. I am told enough is saved throughout the year to be the “Belle of the Ball” at whiskey gatherings.

After warming up with some coffee and a chocolate Dope Donut shot with Stranahan’s yellow label, I share a moment with Titan the St. Bernard and join my group’s tent toward the back of the line. Tickets will be distributed in about an hour. Tents are beginning to stir as StranaFans begin packing up. Once the tickets go out, we line up sans equipment around the building. I take advantage of some last minute morning barbecue and hey, it’s already been a long day, a little Diamond Peak whiskey.

I have my ticket! About 100 or so fans had to be turned away, though. Waiting on line with the dawn rising over the Rocky Mountains glowing in the distance, it somehow feels colder than it was earlier when there was no sun. I’m hopping on each foot to keep my toes from getting numb and wish I’d worn thicker socks, not to mention, packed a flask. It’s just around freezing temperature-wise, but feels colder. I’m told last year it was 18 degrees on the line. I am not comforted by this information, nor can I use it as a fuel source.

The line begins to move. After almost a decade, Stranahan’s has this routine down pat. In an impressively organized fashion, we slowly snake through the distillery and are served cocktails, including the warm, comforting Cereal Killer with bits of Cinnamon Toast Crunch as garnish (the distillery’s lounge has a very accomplished bar team and cocktail list). My now defrosting toes thank me. Live bands are playing. Everyone is tired, but at the same time, no one appears fatigued.

There’s still quite a ways to go before bottle acquisition, but we are distracted by tastes of the new Sherry Cask Finish single malt whiskey, more music, a chance to sign a barrel and a signed Quandary Peak poster. People are still smiling. More whiskey helps.

I’m at the merch table, the next stop before the registers before I finally have my bottle in hand. It’s been a long night and morning for anyone working at the distillery, but the mood is relaxed and jovial. “It’s all for sale! I’m off at 2PM. You want this antler chandelier? [He points above.] I’ll find a way to take this sucker down and come to your house and install it! I have NO plans after 2,” promises Merch Guy.

Bottle is MINE!!!! My own bottle of Stranahan’s Snowflake! Mine! Mine! Mine! Do I want it signed? Okay, that final, optional stretch doesn’t look too long… As I glance to the front of it, where Dietrich is holding court in the lounge with a silver pen, I can view the last of the Snowflake line just entering the distillery.

Dietrich is signing my bottle. He seems hardly the worse for wear, although the bottle accidentally slips out of his hand onto the “table” he is using from barrels pushed together. Luckily we both manage to stop the bottle from rolling to the floor. Could you imagine the sad trumpet happenings?

As my group gathers outside with their treasure, I learn that Mike Kerchhoff’s wife very generously swapped bottles with Russell Cowdin so he’d have one of the first four instead of one of the first six. It truly is a bonding experience – one worth waiting in the cold for.