It’s the most. Wonderful. Tiiiiiime. Of the year! Especially for whiskey shopping!

Now that most of the new releases are out in the marketplace, it’s time to pick up some bottles for gift giving, or as a personal reward. Visiting retailers during holiday season typically means having a more curated selection available to choose from than the rest of the year. It might sound like the greatest job in the world to be a liquor store buyer, but the reality, is the task of deciding how much real estate on the shelves certain whiskeys take up can be quite challenging, especially now that there are so many “cult” whiskeys buyers and collectors are thirsty for. Not to mention, the challenge of weighing simple economics and attempting to anticipate how the average whiskey shopper is going to spend money.

I was the Assistant Spirits Buyer for Astor Wines & Spirits in New York City in the early 2000s. Single malt and cocktail trends were rising, but the craft spirit renaissance was still on the cusp, since most of the people who quit their jobs to make booze were still in those professions. The goal then was to offer the new wave of cocktail bartenders and spirits enthusiasts a selection they could rely on as their go-to. That meant mixing it up between new boutique brands (we were one of the first to support Hudson Whiskey and it was an instant hit because it was one of the first New York State distilleries and also the cute bottle) and some of the classics. The whiskey section was one of the biggest, and still is. Back then it was heavy on the single malts, since that’s mostly what people knew and shopped for, but American whiskey was just taking off again, and by 2007, we had to expand that shelf space to accommodate.

It was such an innocent time. You could still walk into the store and find a bottle of Pappy Van Winkle at any age statement, with only a small margin of a markup. Now retailers are forced to be clever when people request these and other ultra rare bottles. How to handle it? David Othenin-Girard of K & L Wine Merchants in California offers, “We can’t really replace those super specials but we can sell them things that are similar. Orphan Barrel releases are a good gifting substitute since they have high age statements. Those are also limited but much more available than Pappy. Otherwise we tell the story about wheated bourbon like David Nicholson, Larceny, Wyoming Whiskey or Rebel Yell and sell limited single barrel makers like [store exclusive] Wathens Barrel Proof or Four Roses.” 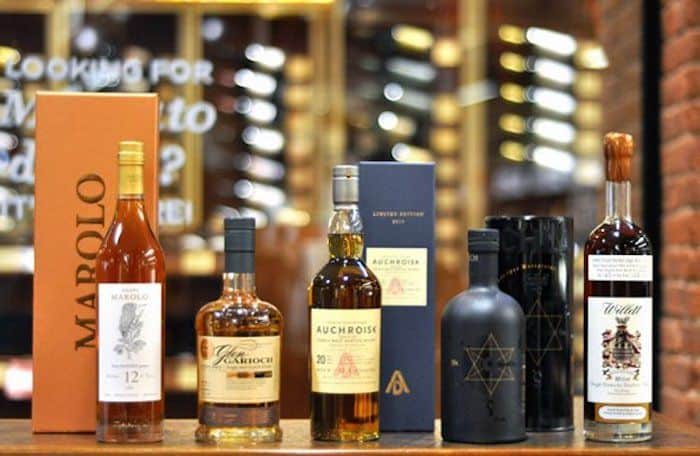 Of course it’s different in Bourbon Country. Chris Zaborowski, the Certified Bourbon Steward (yes, that’s his real title) of Westport Whiskey & Wine in Louisville has an entire Tasting Room Bar with over 240 whiskeys open to sample, the majority of which are bourbon, rye and American whiskey. If customers are still hunting for Pappy, he says, “We offer empathy for their search and let them know that they are available to taste in our Tasting Room Bar. At least many customers will take solace that they can at least have them as a taste experience. Our focus is, and continues to be, on offering some great single barrel selections… So, can’t find a Van Winkle? Then come and taste it. Can’t decide if you want to purchase a Unicorn on the Secondary Market? Come give it a taste and then decide.”

What can customers hope to taste at Westport Whiskey & Wine this year? Says Zabrowski, “The Woodford Reserve Masters Collection is a much anticipated seasonal release. We have our own selection of private single barrels – our 5th edition of the Maker’s Mark Private Select is going to be a real treat.  We have Elijah Craig, Russell’s Reserve, [Wild Turkey] Kentucky Spirit and Old Forester selections arriving soon.  And this year the first barrel of Knob Creek Rye.”

What are these “private barrels” these retailers speak of? The store buys an entire barrel of a whiskey, bottles it and can sell it at what is typically a high profit margin. However, what is in the bottle is also a value that’s passed on to the customer because they are getting a unique expression of a whiskey at a fraction of what a limited edition released by the brand would retail for. This is especially true when it comes to private selections of mature spirits. This year, a few single barrel bottlings on the Astor shelves are Westland 724 Single Malt, Russell’s Reserve, Knob Creek 25th Anniversary, Jefferson’s, High West, Barrel Bourbon and NY State local Black Dirt. Although this wouldn’t be Astor if they weren’t mixing up the American whiskies with some truly unique international selections, like Japanese whiskies including Ohishi Sherry Cask, Ohishi Brandy Cask and Fukano.

All of these retailers, especially the ones outside New York City, have the square footage to devote to a wide variety of whiskey to offer their customers during the holiday season. What about a tiny boutique store that only has the space for a few whiskey shelves? Rick Lopez of Gowanus Wine Merchants in Brooklyn says, “ We do our best to cover most major whiskey regions which is tough with limited shelf space. The flip side of that is if something is slow to sell we notice and adjust accordingly. As a Brooklyn shop we carry several local spirits – the entire Kings County lineup, as well as the Breuckelen Distilling 77 series and NY locals Standard Wormwood Distillery Rye. We love Scotch so we try to span the range of styles from the delicate Cragganmore to Ardbeg and Laphroaig and Springbank 12 Year Cask Strength. Japan has been taking off so they’re well represented. However the lion’s share is still rye and bourbon from the States. Tasmania is in the house in the form of Sullivan Cove! We don’t however have much in the way of big brands. We prefer the money to be in the bottle and not on a series of billboards. Why pay for their advertising if you just want a lovely glass of whiskey?”