Sitting on the front porch on a summer night waiting for the storms to roll in is the perfect occasion for a good cigar and a flight of bourbon. The cold front pushes the unstable warmer air upward where it reaches its dew point and starts to rain, leaving a small window of perfect weather to enjoy the outdoors. 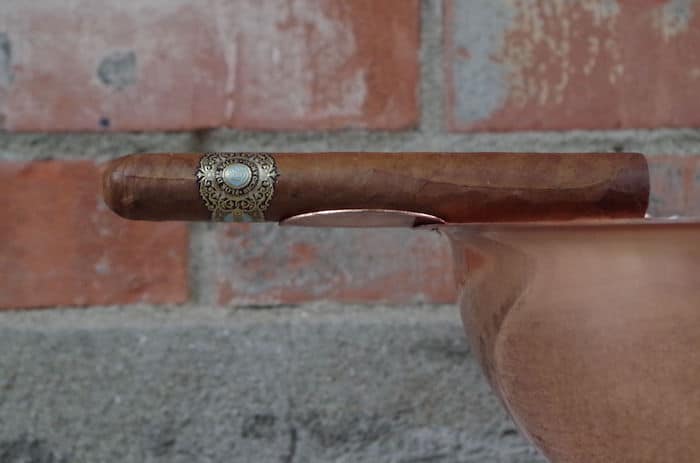 The cigar I chose to enjoy while waiting for the storms was a Warped Flor Del Valle Sky Flower, a 5 5/8 x 60 is a Gran Corona “featuring the unique and incredibly rare medio tiempo ligero. Sky Flower is only available at select Flor Del Valle retailers across the world,” according to Warped.

Also according to the Warped website, “Flor Del Valle is a revived old Cuban brand produced with 100% aganorsa tobacco down in Estelí, Nicaragua by casa Fernandez. utilizing true Cuban production techniques such as entubado bunching and the classic Cuban triple cap. with a Jalapa valley grown corojo 99′ wrapper, you can experience the Valle for yourself.”

Entubado bunching, according to Tobacconist University, is “the bunching technique which rolls each filler leaf into itself, almost like a small scroll. Each individually “scrolled” leaf is then placed together to form the bunch. This skillful rolling technique creates a more firmly packed cigar which allows air to travel between all of the leaves, carrying more aromatics/flavors to the palate. Entubado rolling is the most difficult and complex bunching method and is therefore rarely employed in large scale manufacturing. A similar bunching method is called estrujado, a.k.a. “Lazy Entubado”, as nicknamed by the cigar makers at Drew Estate.”

The cigar industry term for a cigar containing wrapper, binder, and filler all from the same country of origin is puro.

On the initial cold draw the predominant flavor was chocolate. Upon lighting the cigar had heavy pepper notes which eventually mellowed out to a creamier flavor. The draw was very easy and the burn was even. This is a medium to full bodied cigar.

These cigars retail around $14 per stick.

Together: The smoke brings out heavy spice and leather notes in the bourbon, while the bourbon ironically mellowed out the pepper spice.

Together: The smoke brings out maple syrup and baking spices in the bourbon, while the bourbon brought out an interesting alfalfa hay note in the smoke.

Together: The smoke brings out sweet ripe apple and honey in the bourbon with a background note of orange blossom. The bourbon made the smoke taste sweet, and I could swear I even caught a hint of coconut.

All of these were nice pairings and you could totally enjoy any one of them just fine, but by far the most complex of the three was the Four Roses Yellow Label. It produced a symphony of complex and surprising flavors. Ordinarily I would always recommend trying any cigar with a flight of bourbons to see what you can come up with, but even though these were all nice pairings I would be hard pressed to find anything else I would recommend that would pair as well as the Four Roses Yellow Label.

In the end the storm clouds ended up blowing over and I had to drag the hose out to water the flowers. But it was still a lovely evening.