When it’s too hot to move but you don’t want to hide inside, sitting on the patio smoking a cigar is sometimes the only thing you can do. I still drink my bourbon neat in the summertime, though you may find you’d like your chilled or with a cube of ice. 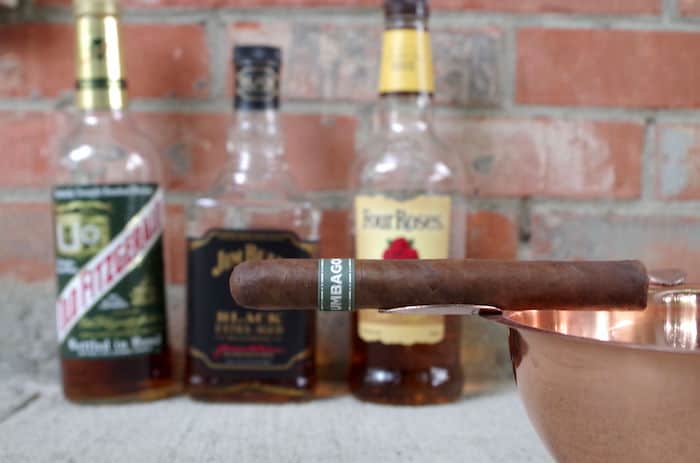 This month’s pairing is a lovely cigar with a funny-sounding name: Umbagog by Dunbarton Tobacco & Trust. I chose a corona gorda 6×48. The wrapper is Connecticut Broadleaf, and the binder and filler are both Nicaraguan. It is manufactured by Nicaraguan American Cigar in Esteli, Nicaragua.

Predominant flavors upon lighting are rich cocoa and a faint minerality. Spice notes build after the first few minutes.

Steve Saka, an industry veteran, is the mastermind and Master Blender behind Dunbarton Tobacco. He named this cigar after his favorite fishing lake on the border of New Hampshire and Maine. According to the company’s information sheet:

“Umbagog is the name of one of the most pristine wilderness lakes in all of the United States. It is located on the border between Coös County, New Hampshire, and Oxford County, Maine. The origin of the word is from the Abenaki Indians meaning “shallow water” and I have been told the proper pronunciation is to the stress the second syllable as in “um-BAY-gog”, however I prefer to say it incorrectly as I always have as: “oom-BA-gog”. Just saying this word wrongly instantly makes me happy of heart. It is one of my favorite places in the entire world. The sky is marked with eagles and osprey, moose graze along her marshy shores and otters play friskily in wake. I love being on its quiet waters casting my line for the copious and voracious monster smallmouth bass it holds.”

The sheet goes on to say this cigar was designed to be a working person’s cigar, something you would smoke while mowing the yard. It lit perfectly, burned perfectly, and smoked like a dream, so I would be more than happy to smoke this one in a fancy lounge if that were my thing. There’s currently a shortage of several sizes, but you may be able to find this corona gorda at your local tobacconist. Retail on this is a very affordable $7.75 a stick.

Together: The smoke brings out sweet apple and spice in the bourbon, like apple pie and vanilla ice cream. The bourbon brings out chocolate milk in the smoke.

Together: The smoke ironically mellows  the spice in the bourbon and highlights the complexity  of flavors from the multiple yeast strains – things like green apple and floral notes. The bourbon brought out milk chocolate notes in the smoke.

As always, these were all decent pairings in their own rights. I probably wouldn’t choose the Old Fitzgerald unless I really wanted to play up the spice. The Jim Beam Black was surprisingly complex with this pairing. The Four Roses Yellow Label, however, was the clear winner tonight. You could really tell how complex this bourbon is in this pairing. These are all working person’s bourbons, and they all pair very nicely with this working person’s cigar.

45
Shares
97
Views
Share on FacebookShare on TwitterGet Our Newsletter
Get The Macallan® Rare Cask at ReserveBar. Shop now!