The Best Cola For Your Jack & Coke

I’m going to take a guess: Your first whiskey cocktail was a Jack & Coke.

It’s true for me at least. I have clear memories of sidling up to a bar in Europe in 2001, still far too young to shop for alcohol at home, and ordering a Jack & Coke solely because it was the only cocktail I knew how to order. For a teenager facing down the perplexing world of the bar, it felt safe. The ingredients were right there in the name, and one of them—Coca Cola—was already a familiar substance. The same could not be said for Campari, pisco, or Fernet, the other options on display.

There’s a reason the Jack & Coke is so popular. It’s sweet, mild, and never asks too much of you. It’s available everywhere: every hotel bar, every neighborhood dive, every airplane drinks trolley. And it’s reliable. With only two ingredients, even the most amateur bartender can’t screw it up. Plus, it was Lemmy from Motorhead’s favorite drink, and it’s so closely linked to him that there’s been a postumous movement to rename the Jack & Coke “The Lemmy.” Who couldn’t benefit from feeling like Lemmy every once in a while?

Yet bartending always seems to reward finesse, so I wondered: Does the Jack & Coke have room for improvement? Is classic Coca-Cola truly the best cola for the job, or might other colas be better? There was only one way to find out: a taste test. 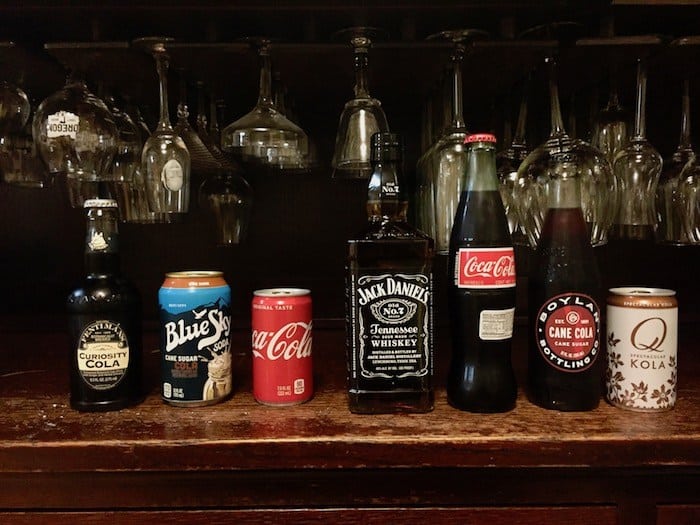 We used a ratio of two ounces of Jack Daniels to three ounces of cola as recommended by Gary Regan in The Joy of Mixology. This produces a slightly stronger drink than you might be accustomed to if you drink your Jack & Cokes in a pint glass. Each drink was built in a 12 ounce highball glass filled with ice, beginning with whiskey and topping with cola. We skipped a wedge of lemon or lime to focus on the cola-whiskey interaction, but citrus is often a nice way to brighten up an otherwise very sweet concoction.

We also tasted each cola on its own, without ice or whiskey.

Classic Coke: On its own, classic American Coca-Cola is sweet and caramel-forward, with a hint of clove and nutmeg and that familiar phosphoric acid tingle. In the cocktail, it’s like being instantly transported to your local dive. It’s a corn-on-corn dance, each amplifying the other without introducing any truly new flavors—plus, with whiskey, Coca-Cola’s acidic notes are a real asset.

Mexican Coke: Made with cane sugar instead of corn syrup, Mexican Coke has a purer, almost glassier flavor than traditional Coca-Cola, with rounder, more gentle mouth feel. In the cocktail, the acidity is less pronounced, making the drink taste a little bit sweeter and avoiding that funny feeling on your teeth. It’s good, perhaps an improvement on the classic, but would be better with a wedge of lemon or lime.

Blue Sky Cola: Choosing cane sugar rather than corn syrup seems to be the only thing making Blue Sky “healthier” than regular Coca-Cola. It tastes pretty much like plain, carbonated sugar water. The resulting cocktail is far too sweet, with virtually no spice or acidity. Our least favorite in the tasting, but helped to reveal the magic of regular Jack & Coke.

Boylan’s Cola: Fine bubbles, low acidity, and a vanilla-forward flavor characterize Boylan’s Cola. In the cocktail it’s nice, an unobtrusive backdrop for the whiskey, but its lack of acidity keeps it from achieving Jack & Cola greatness.

Q Kola: While perhaps better known for its upmarket Q-Tonic, Q Mixers produces a while line of beverages including a Kola. Marketed specifically as a mixer, Q Kola is spicier and less sweet than the mainstream colas. It uses agave syrup as a sweetener, and has a warm, gingery flavor. While it touts a diverse list of botanicals including clove, cinnamon, nutmeg, and vanilla, it comes across closer to Schweppes Ginger Ale than classic Coke. It’s also the lightest in color of the bunch by far.

I had high hopes for Q, but paired with the whiskey, it under-delivers. The resulting drink is lighter, drier, and definitely more cocktail-like, but—and perhaps this is my sugar-blasted palate speaking—I don’t think it’s sweet enough. It tastes already watered down, like something you’d drink on a plane.

Fentiman’s Curosity Cola: This English brand is known for a deft hand with herbs and botanicals, and the cola shows that skill in spades. This is a completely different animal than Coca-Cola. It pours an inky black, and has a hugely complex flavor with lots of clove, pomander, mint, horehound, and ginger. It’s not very fizzy, nor is it acidic, but mixed with Jack Daniels it tastes like an honest to god, real-deal cocktail, perhaps with an amaro or two in the mix. It’s totally different than the classic, and Lemmy would probably reject it, but to me, it’s a home run—and now I’m excited to try Fentiman’s in an upscale Cuba Libre.

Coca-Cola’s phosphoric acid might raise some eyebrows among the world’s health nuts, but those people aren’t drinking Jack & Cokes anyway. It’s an essential part of the success of the classic, and I missed it when it was gone. Mexican Coke and Jack Daniels with a twist of lime was an upgrade I could get behind that wouldn’t upset the traditionalists, but many of the other fancier colas failed to impress.

My Jack ‘n Coke at the local dive bar days are maybe 75% of the way behind me, but the Fentiman’s and Jack Daniels is a real drink, one I’ll look forward to having again, which makes it the winner of my comparative testing.