Earlier this month, the Distilled Spirits Council of the United States (DSCUS) released its annual economic report for 2017. Whiskey drinkers, you deserve a round of applause. Whiskey sales in the United States had yet another stellar year, with American, Irish, Canadian, and Scotch products all seeing significant growth.

American whiskey fans, this means times are good for your beloved bourbon, Tennessee whiskey, and rye producers. Last year, producers sold 23.2 million cases of American whiskey, up 6.4% over one year prior. As drinkers continue to trade their budget bottles for spendier spirits, revenue grew at an even faster rate: up 8.1%, reaching $3.4 billion taken in by spirits producers.

There was good news for pretty much every category of American whiskey (except white/corn whiskey, which was down -0.5%), but some segments saw particularly robust growth. Super-premium spirits, which DSCUS defines as costing about $30 or more at retail, saw volume grow 18.3% in 2017. Rye whiskey also boomed, seeing 16.2% volume growth and selling 900,000 nine-liter cases cases. For context, in 2009, just 100,000 cases were sold – that’s an 800% increase in less than a decade. 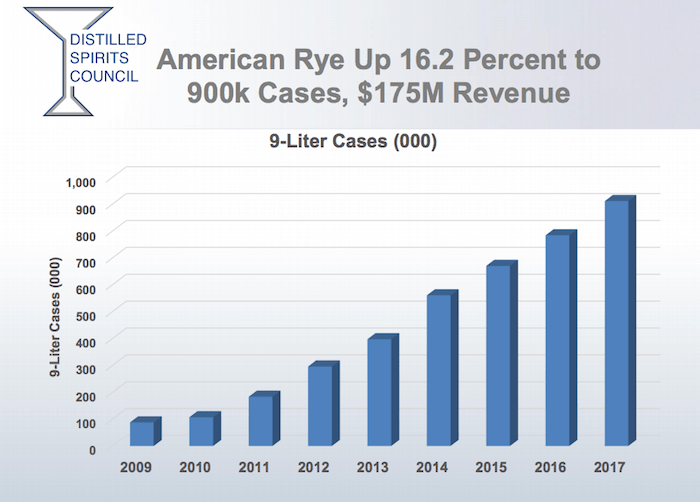 Scotch’s relatively anemic performance vividly illustrated the push towards premiumization, with a reduction in volumes (-3.3% and -1.2% for blends and single malts, respectively) coupled with a 0.4% and 1.1% increase in revenues. That means people are buying less, but more expensive, Scotch. Canadian whisky also saw growth, although compared to American whiskey its performance also looked a little sluggish. Volume was up 2.4%, while revenue was up just 2%. Irish whiskey, on the other hand, chalked up yet another banner year, with 11.3% growth in volume and 12.8% growth in revenue, almost entirely in the super premium segment. And while DSCUS doesn’t report statistics related to Japanese whisky, they mentioned it, too, performed strongly in 2017.

Another bright spot for the spirits industry was exports. Buoyed by a weak dollar, overseas sales of U.S.-made spirits were up more than 14%, reaching $1.63 billion. “American spirits, particularly whiskeys, are the toast of the global cocktail scene,” said council senior vice president for international affairs Christine LoCascio. “International adult consumers are exploring more expensive U.S. spirits driven by their fascination with American whiskey’s heritage, as well as its mixability and versatility in cocktails.” The U.K., Germany, Brazil, France, and Spain were the largest export markets for American spirits in 2017.

What does all this mean for us, the consumer? We can continue to expect to be aggressively wooed by whiskey brands, which will continue pouring money and energy into new whiskeys, new ways of engaging customers, more expensive bottlings in that super-premium segment, and, increasingly, a push towards online ordering and fulfillment. In other words, we’re looking at a lot more of the same—and perhaps an easier time tracking down a decent Manhattan cocktail abroad.