In mid December 2021, tornadoes ripped through a dozen counties in Western Kentucky, destroying homes and leveling trees and fields.

The group organized a six-day Kentucky Bourbon Benefit auction that took place online from Dec. 16 through Dec. 21 and raised $1.77 million. Other bourbon community members contributed more than $5 million in donations to the state. 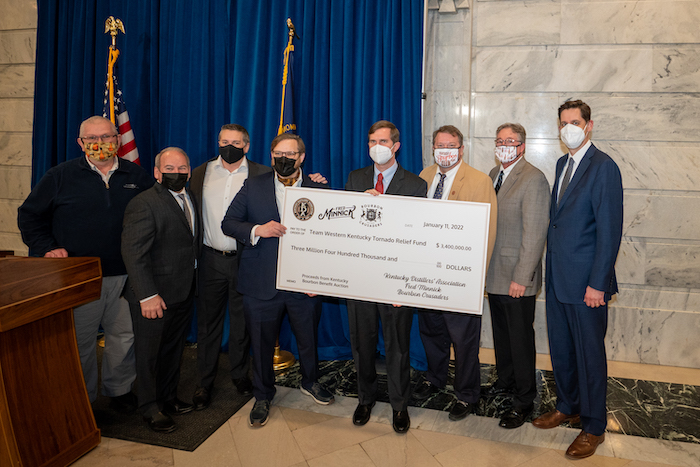 “I appreciate our signature Bourbon industry quickly stepping up to raise much-needed money for Kentucky families that have lost so much in this tragedy,” said Beshear in a prepared statement. “All of our distilleries and organizations around embrace not just bourbon, but embrace Kentucky, and that is something we will not forget.”

Donations can still be made at KentuckyBourbonBenefit.com.

Minnick is a bourbon critic and involved in the Bourbon Pursuit Podcast, DASH Radio’s “Minnick’s Minute” show and his Hermes Creative Award Platinum-winning podcast The Fred Minnick Show, which features interviews with musicians, athletes and other celebrities.

The Kentucky Distillers’ Association was founded in 1880 and is the historic voice for Kentucky’s signature Bourbon and distilled spirits industry. Its diverse and growing membership produces the majority of the world’s Bourbon.

The Bourbon Crusaders are focused on leveraging their passion for Bourbon for a range of charitable purposes. Its 30 members represent a vast array of backgrounds, geographical locations, skills and relationships in the whiskey universe.

The Bourbon Crusaders have raised almost $1,000,000 over the past four years for a variety of charities, from distillery partners, the greater Bourbon industry, philanthropic individuals, and its events.