The Story Behind The World’s First AI-Created Whisky

Editor’s Note: This article is republished from its original post with permission from Microsoft.

The number 36 may not hold any significance for you, but for Angela D’Orazio, it marks an important milestone.

D’Orazio is the master blender and chief nose officer at Mackmyra – a multi-award-winning Swedish whisky distillery, and the producer of the world’s first AI-created whisky.

Recipe number 36, generated by an AI algorithm, was the one that D’Orazio personally selected for the groundbreaking blend, before it went into production and on general sale.

This is the story of human craftsmanship and technology working in partnership, to produce something rather special.

The idea for AI-created whisky came to light during a meeting between Mackmyra and Microsoft, in which the future of whisky was being discussed. Inspired by the idea, Microsoft partner Fourkind – a Finnish technology consultant – was brought in to develop the solution.

Working closely together with Mackmyra and D’Orazio, Fourkind created its AI solution using Microsoft Azure and Machine Learning Studio, before providing it with the datasets it needed to begin generating its first recipes. 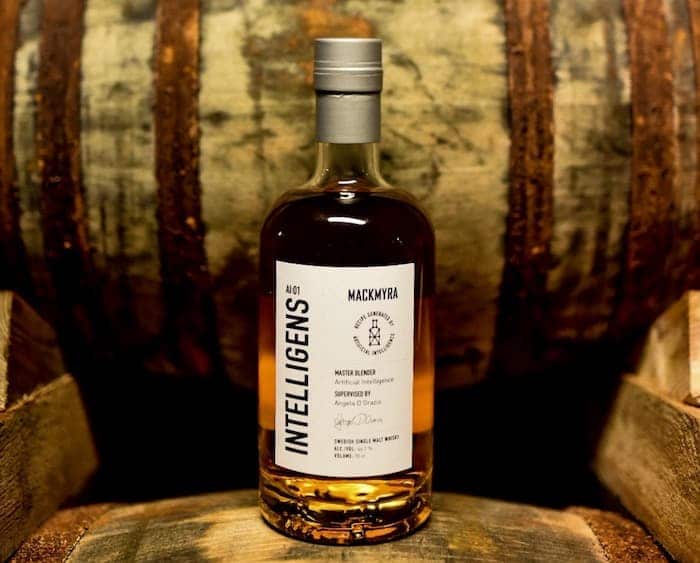 The AI-created whisky from Mackmyra and Microsoft (image via Microsoft)

Microsoft’s Machine Learning Studio – a powerful browser-based tool – was used by Fourkind for its easy serverless infrastructure handling, allowing them to run and deploy their own custom solution, creating a bespoke AI algorithm which intelligently generates new whisky recipes.

After the first recipes were generated, D’Orazio used her knowledge to determine which recipe ingredients would work well together, while correcting other less desirable combinations. As this process was repeated, the AI algorithm began to learn which combinations were the most favourable, and using machine learning, began to produce more desirable recipe combinations.

After repeating this process multiple times, D’Orazio felt recipe number 36 call out to her from an initial shortlist of five recipes, feeling that the AI’s innovative combination of ingredients would make for a fine whisky. While the ingredients were provided by the AI however, the all-important choice of the storage cask, in which the whisky would age and gain its flavour, was carefully selected by D’Orazio herself.

Despite using AI to generate new recipes, D’Orazio believes “The work of a Master Blender is not at risk. While the whisky recipe is created by AI, we still benefit from a person’s expertise and knowledge, especially the human sensory part, that can never be replaced by any program. We believe that the whisky is AI-generated, but human-curated. Ultimately, the decision is made by a person.”

This is not only faster than a person carrying out the process manually, but thanks to the algorithm’s ability to sift through and calculate a vast amount of data, new and innovative combinations that would otherwise never have been considered, can be found.

Together, Mackmyra and Fourkind have, for the first time, used AI in the creation of a new whisky, by augmenting the capabilities of the master blender to produce novel suggestions.

Their partnership demonstrates how technology can be used to help people achieve their best work, while still relying on their own skills, knowledge and expertise.

For D’Orazio, the experience has changed the way she views technology, and the transformative effects it can have. “We always strive to challenge the traditions in the very traditional whisky trade, and that’s something we can really do now with the help of AI.”

“We see AI as a part of our digital development, and it is really exciting to let AI be a complement to the craft of producing a high-quality whisky. For me as a Master Blender, it is a great achievement to be able to say that I’m now also a mentor for the first ever created AI whisky in the world.”

The success of the world’s first AI whisky has also introduced new business opportunities for Fourkind, allowing it to use the same principles used for Mackmyra, across different industries:

“This AI-generation can have an impact in different industries globally,” says Kartela. “I envision AI systems generating recipes for sweets, perfumes, beverages, and maybe even sneaker designs, and I think we’ll see a lot of complex consumer products being designed by AI or with AI during the next few years.”

“We are showing the way forward, and these new AI solutions can be used to generate products that retain the spirit, look and feel of the brands behind them, while at the same time being new and unique. From medicine to creative tasks, humans will outperform machines in many areas. We just need to know where to use AI to get the most out of us as employees and experts.”