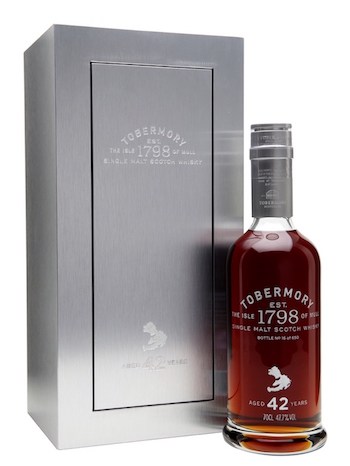 image via The Whisky Exchange

Tobermory, one of Scotland’s older distilleries (it was first established in 1798) made some strong waves in the decades-old Scotch category last year with the release of its lightly peated Ledaig Dusgadh 42 Year Old expression. This Island outfit is known more for its non-peated expressions, however, and to this end has quietly debuted another 42 year old bottling under its own name.

The new Tobermory 42 Year Old, according to information provided to us by the distillery upon request, has the following characteristics:

We’ve been provided tasting notes for the deep walnut colored Tobermory 42, which you’ll find at the end of this story. There is also, interestingly enough, a review of the whisky up already from Malt and Oak which gives you a good idea of what this older spirit will taste like. One thing in particular which grabbed my attention from this article was the fact this Scotch supposedly was due to hit retail at the end of last year, but it looks to have been delayed, as evidenced by a Facebook post from the distillery showcasing the bottling just recently having arrived in their gift shop.

As far as availability goes, I would expect it will soon be available via the same channels as the Ledaig 42, including here in the U.S if you happen to be a collector of higher-end whisky.

204
Shares
308
Views
Share on FacebookShare on TwitterGet Our Newsletter
Cheers to the Dads! Personalize a bottle of his favorite whiskey to create a modern gift for the modern man. Use code: FATHERSDAY20 for $20 off your next order of $100 or more at ReserveBar