With roots in both the Scottish Borders and the Hebrides, R&B Distillers are seeking to build distilleries in both – uncommon provenance for whisky production. The Borders has not seen a whisky distillery since 1837, and R&B are building the first legal one on the Isle of Raasay, planned to open early 2017. Co-founder Alasdair Day’s great-grandfather was a Borders master blender in the early 19th Century, while his other great-grandfather hailed from the Hebrides. 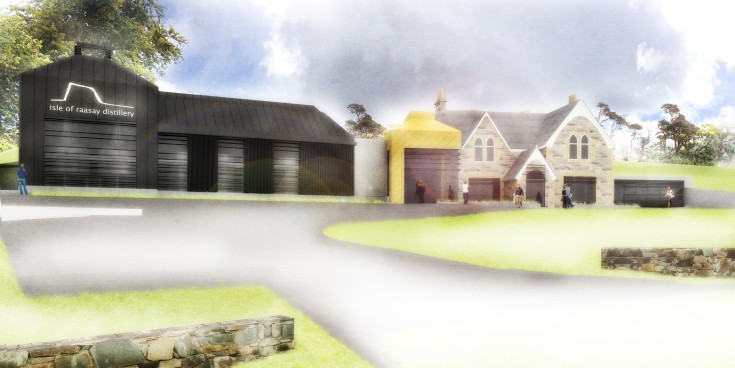 Building distilleries takes time though, so R&B are satisfying their impatience by crafting the styles of whisky representative of what’s to come; the aptly named Raasay While We Wait single malt, and Borders single grain. They also continue to promote their heritage brand The Tweeddale.

R&B have the tip and tail of Scotland covered when it comes to styles of whisky. Expertly  handcrafting their award-winning classic blend of nine single casks, a distinct single malt finished in Tuscan red wine casks, and an uncommon single grain Scotch of malted barley and wheat (which I am pleased to review today), they demonstrate the vast differences in profile across drams. Scotch whisky is characterised by tradition, and the R&B collection pioneers Scotch that is informed but not constrained by tradition

According to the official website, Borders is “an uncommon composition, the only single grain Scotch Whisky to contain 50% wheat & 50% malted barley from one highland distillery, finished in Oloroso Sherry casks to represent the style of our future Borders distilling.”

Nose: Sweet and gourmet with toasted bread, burnt caramel, praline, licorice, buttered brioche and sweet spices like some subtle star anise. The nose also boasts elegant floral hints in the background with orange blossom. The Sherry finish brings an interesting depth to the overall sweetness of this grain whisky with dried fruits and nutty flavours. With a dash of water, it becomes incredibly addictive with sugary notes of melted chocolate-topped marshmallows, meringue and christmas cookies. Definitely something to suit drammers with a sweet tooth!

Palate: Light but still lively and vibrant with its 51.7% ABV. First sampled neat, it shows aromas of dried fruits and toasted walnuts, dates, oak tannins, ginger bread and white pepper. Add a few drops of water and it flows onto the palate with masses of yummy milk chocolate and cereals: a bit like the adult version of your children’s breakfast chocolate crispies bowl.

Finish: Warm and spicy with some pleasant roasted almonds topped with brown sugar.

Mystic Distillery Wants To Sell You Aged In Orbit Bourbon

Keen whisky enthusiast and French blogger documenting my malted journey on www.thewhiskylady.net searching for news, trends and experiences. Est*1990 - My mission is to remove the dusty cliché that whisky is only an old man's drink. Also working as a freelance representative for distilleries in France and estimating bottles for...