And then there were nine.

The whisky isle of Islay has long been considered a sacred ground for Scotch whisky, particularly for lovers of peated expressions. Those who journey here have, to date, been able to partake in the goodness flowing from the stills of eight different distilleries owned by various companies. That number has now officially increased by one with the opening of Ardnahoe from independent Scotch whisky bottler Hunter Laing.

The new Ardnahoe distillery, the idea of which was first floated back in early 2016, is the result of a £12m investment from Hunter Laing. It is being helmed by Scottish whisky distilling legend and master distiller Jim McEwan. McEwan, who had originally planned to retire after leaving Bruichladdich, was lured back into the game to offer his guidance to Ardnahoe in crafting what’s described as “a classic peated spirit for maturation in ex-American bourbon barrels and ex-Spanish sherry casks.” 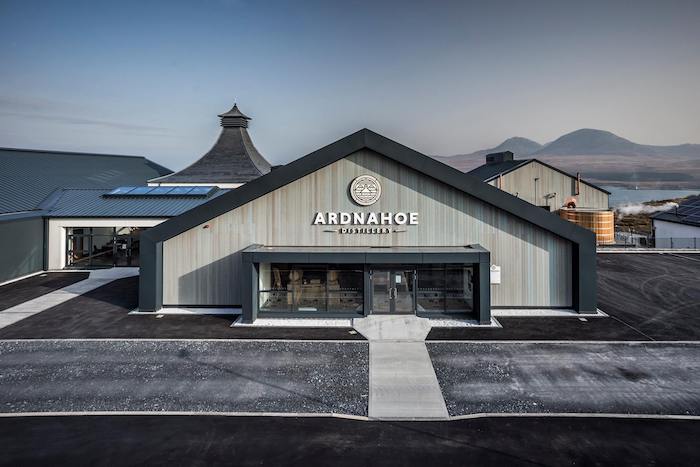 Ardnahoe comes online as a facility that’s said to blend “state-of-the-art building design and technology with traditional distilling practices,” the latter of which includes such things as wooden wash backs and worm tub condensers. Tourism is a consideration here as well, with plans to welcome upwards of 20,000 tourists a year to explore the distillery via a large visitor’s center that includes retail, a whisky bar/restaurant and views of the operations. Tour packages will be offered for those that want to get a closer look as well.

“Since working as a teenager at Bruichladdich Distillery over 50 years ago,” said Stewart Laing, managing director of Hunter Laing, in a prepared statement, “I have had a huge affinity with Islay and its malt whiskies. When we decided to build our own distillery, there was only one possible location. We have built a great team to manage the distillery and run the visitor centre and in a few years’ time we will be able to drink a great whisky in the classic Islay style, staying true to the island’s heritage with a heavily peated malt.”