Bourbon History: The Advent of the Bourbon Bottle

For most of the 19th century the barrel was the major package for selling bourbon to consumers. The distillers would sell the barrel either to a saloon or spirits shop, and that business would sell to the consumer. Glass was expensive and very few retail establishments bottled the bourbon. Instead, they depended upon the consumer to bring their own flask or jug.

The early flasks were ceramic or hand blown glass, and they often were figural flasks; pig shaped flasks were very popular. There were also glass flasks made to commemorate the Revolutionary War and its leaders. George Washington, Ben Franklin, Bunker Hill, and other such subjects were embossed on the flasks. The sizes of these flasks varied and ranged from a half pint, pint, and a quart. Jugs, the other popular customer container, were earthenware ranging from half pint to 10 gallon capacities. These jugs were most often plain looking with nothing to indicate the content.

By the 1840s, bourbon bottle labels were created. Labels made them stand out on a shelf amid others, and colorful ones bore brand names prominently for the consumer to see. Spirits shops started to bottle some of the bourbon to sell to customers who did not bring flasks or jugs. 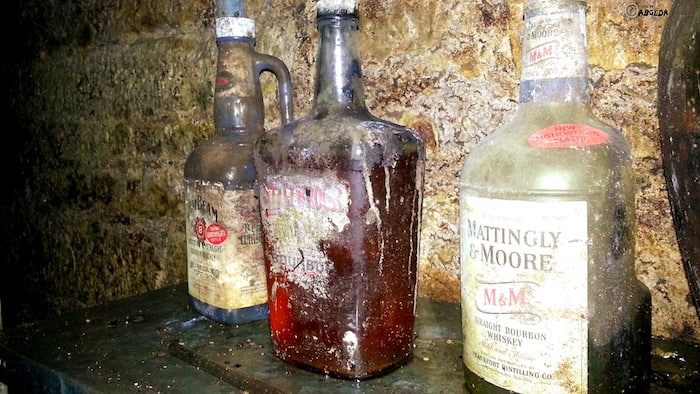 Some old whiskey (image via Abgeda/flickr

In the 1960s National distillers had a contest to find the oldest bottle with the term “bourbon” on the label. They were hoping for an Old Crow bottle since it’s one of the oldest brands in existence. The bottle that won the contest was a bourbon bottle from Binneger’s Grocery store in New York City and dated 1849. The Filson Historical Society has a collection of labels made by Henry Miller who owned a lithography business in Louisville in the 1850s, and which include labels for Geo. Welby and Samuel Jacobs & Co.

The problem was that the consumer only received what the saloon owner or the spirits shop owner provided. This is true for both the bourbon sold out of the barrel and in the bottle. They would often water down the bourbon or add fruit juice and brown sugar to darken the product and give it a sweeter taste. Even with the most honest retailers the whiskey would change in the barrel as it was emptied and the spirit oxidized. Since customers never really knew what they were getting out of those barrels, consistency of the bourbon became a problem.

Glass bottles were still very expensive even into the 1880s when a machine-made bottle started to drive down prices. The fact that bottles were expensive in the 1870s makes what George Garvin Brown did more remarkable. In 1870, Brown was working for Henry Chambers as a pharmaceutical salesman and receiving complaints about the quality of the whiskey changing over time. Brown may have been inspired by Hiram Walker who was selling Canadian Club in the bottle as well as the barrel at that time.

But in any case, he created the idea of a bottled bourbon where the quality would not change. The fact that Walker’s Canadian Club was selling well by the bottle even at the additional expense proved that it could be done. Brown and Chambers raised the money needed to purchase the barrels of whiskey, the bottles and to print labels and Old Forrester (as it was originally spelled) was born. It was sold only by the bottle to ensure the quality of the brand. Note that it wasn’t the first bottled bourbon, rather it was the first bourbon sold only by the bottle.

Suddenly selling whiskey by the bottle was economically feasible, so other distillers followed suit. In 1890, James E. Pepper got Kentucky laws changed to allow him to bottle his own product at the distillery.

The Bottled-in-Bond act of 1897 created a whole new market for bottled whiskey by separating straight whiskey from blended whiskey in the marketplace. Each BIB’s tax stamp seal was an adaptation of the seal James E Pepper created to seal his bottles against tampering. The tax stamp also gave the consumer valuable information as to where and when the whiskey was made and bottled. As a result, drinkers gained confidence in the quality of the whiskey in the bottle, and they began to prefer bonded whiskey to whiskey sold from the barrel.

Prohibition eventually ended the practice of selling bourbon straight from the barrel to the consumer, and with that law’s repeal, the government set up standard sizes of bottles that could be used for spirits sales. The government gauger also oversaw the bottling of the spirits to ensure that consumers received every drop they paid for. These sizes existed for almost 50 years until the government began switching to the metric system for spirits in 1978. Given that that switch wasn’t completed until 1982, both the fluid ounce size and the metric size would be on the bottle or the label.

In 1984, the spirits industry was deregulated and the government gauger was no longer on the distillery grounds checking bottling lines. The tax stamp disappeared from bonded whiskey and was replaced briefly with a “fake tax stamp,” that gave no information. Its job was to ensure the seal of the bottle. Improved technology in bottle caps with tamper-proof seals and other methods of sealing bottles with cork cause led to the elimination of the fake tax stamp by the end of the decade.

In less than a century, the bourbon industry went from barrel sales to bottle sales. The transition was not always smooth and seamless, but progressed anyway as technology allowed it. Today the bottle of untampered, high-quality bourbon is the norm, not the exception it was in the 19th Century. The consumer has benefited greatly by this change in marketing and technology.

76
Shares
1.5k
Views
Share on FacebookShare on TwitterGet Our Newsletter
Cheers to the Dads! Personalize a bottle of his favorite whiskey to create a modern gift for the modern man. Use code: FATHERSDAY20 for $20 off your next order of $100 or more at ReserveBar