Wasmund’s Single Malt Whisky is made by Copper Fox Distillery in Sperryville, Virginia. Founded in 2005, Copper Fox is a bit older than many American craft distilleries, and they’ve got an interesting story to tell.

Copper Fox’s founder, Rick Wasmund, caught the distilling bug on a trip to Scotland in 2000. While he was there, he managed to sweet-talk the distillers at Bowmore into offering him an internship, where he first worked with peat-kilned malt. (Perhaps in homage to the experience, Copper Fox prefers the “whisky” spelling, without the extra “e.”)

The experience got him thinking – if peat imparts such a distinctive flavor when used as a kilning fuel, how might other kinds of materials behave? Apple wood, for instance, or cherry wood? Those questions led to the creation of his own distillery, Copper Fox, complete with a malting facility where he could experiment to his heart’s content.

Copper Fox is now in small, but growing, company in the malting experience. Coppersea, Rogue Spirits, Leopold Bros., and Hillrock Estate Distillery, among others, all malt some portion of their own grain. Yet Copper Fox malts 1,600 pounds of barley every other day, fulfilling 100% of their malt needs – a remarkable feat, and one worth celebrating.

Wasmund’s Single Malt Whisky is made from 100% own-malted barley, kilned with a blend of fruit and hard woods. The resulting mash is then pot distilled, and aged using a combination of barrels and wood chips.

Hold up. Wood chips? Yes. Here’s what they have to say: “Our methods for chip and barrel aging are a secret. Most of the work is done by hand. The process results in a deep, rich range of finish flavors that is unique. It also happens to obtain optimal maturity much faster.”

A story in Artisan Spirit Magazine from 2015 gives a little additional context. “Rick s proud of the system they developed which involves aging their spirits in upright barrels, facilitated by the cutting of a trap door in the top of the barrel. Copper Fox puts applewood and oakwood chips inside the barrels to augment the spirit’s maturation, which is why a shorter time is effective for their aging program.”

While I don’t associate wood chip aging with great quality, I’m intrigued, even before tasting. Copper Fox has been at this a long time, and they clearly take great care with their raw materials. Perhaps there’s something to it? 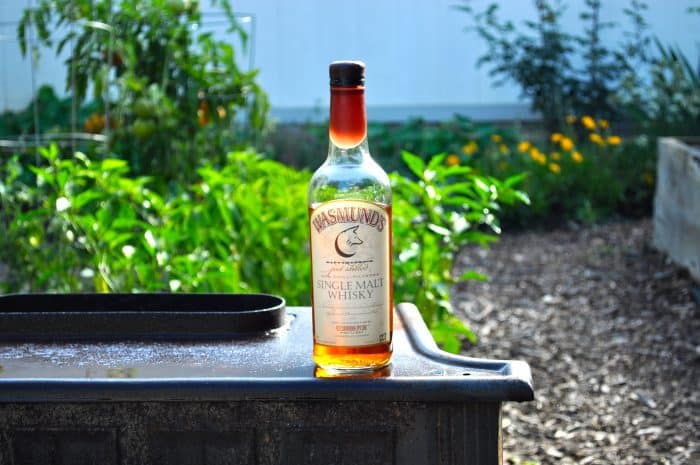 Nose: My first impression of the nose is very herbaceous, with lots of verdant, earthy notes like dill, black pepper, damp earth, and yarrow alongside a touch of linseed oil. The wood character has a bit of an unpleasant sawdust/hamster shavings quality, although a distinct smoke note keeps things from smelling totally raw.

Palate: The palate is on the musty side, with more of those wet garden/wet earth flavors from the nose, plus a bit of pungent naphthalene and cinnamon. It’s quite new-make-y, with lots of raw and cooked grain, although the porridge is punctuated with tantalizing suggestions of sweet cherry and apple. A charred sweetness and a distinct, almost cooling mentholated quality distinguishes a long finish. The char note in particular really sticks with you – the aftertaste is almost like that of a cigar. Overall, it doesn’t taste as hot as you might expect from 48% ABV.

I can’t say the flavor or aroma of Wasmund’s Single Malt entices me greatly. Although there are a handful of interesting fruit/menthol notes, the unappealing combination of musty grain and ashy char falls flat. It’s hard to know which flavor components are attributable to Copper Fox’s malting/kilning process, and which are a result of the wood chip aging. I’d be interested in trying this again if it was aged traditionally.

Score: 75 [SHOP FOR A BOTTLE OF WASMUND’S SINGLE MALT]