The Golden Moon distillery, located in Golden, Colorado, was founded back in 2008, positioning itself as a “small artisan distillery making high-end distilled beverages using traditional artisanal methods of production.” To date it currently produces over 20 products, including single malt whiskies, gins, absinthe and a variety of brandies, liquors, liqueurs and other whiskies. The distillery team there now has added two more single malt whiskeys to the mix.

The new Golden Moon Principium and Golden Moon Triple, according to those behind them, are two “uniquely Colorado single malt whiskies.” As noted by Golden Moon distiller Stephen Gould of them, “both are made from 100% two-row Moravian barley, grown in Colorado and the surrounding states and malted right here in Golden Colorado. Both are milled, mashed, fermented, distilled and cask-matured here at Golden Moon Distillery. We use a unique mashing procedure and a proprietary strain of yeast for fermentation for all our single malts whiskies. 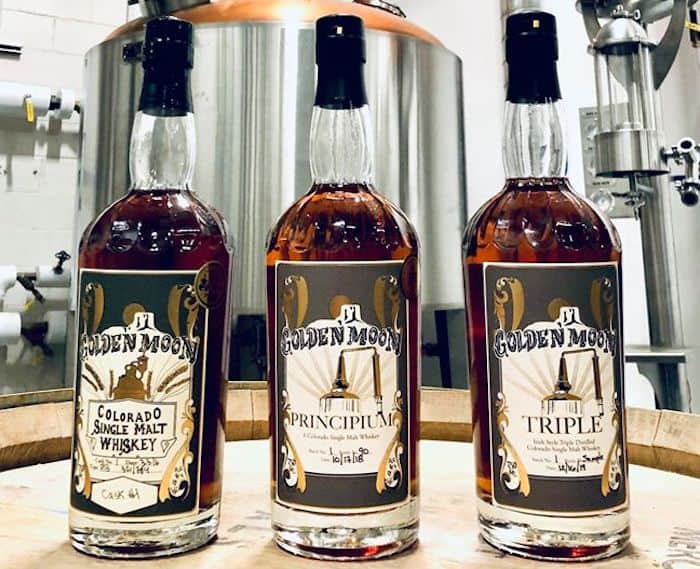 “Principium is a double-distilled single malt whiskey that is matured in charred white American oak casks. It is a smooth, approachable whiskey, full bodied with a malty character and nice caramel notes. It is bottled at 46% ABV / 92 Proof.

“Triple is a limited release (allocated) triple-distilled single malt whiskey that is also matured in charred white American oak casks. We’ve only produced 500 bottles of this whiskey. I have been a consulting master distiller in Ireland for the last couple years, and that work has inspired me to play around with traditional Irish-style whiskey production techniques here at Golden Moon. This is one of the results.

“It is a light and friendly whiskey with a wonderful mouthfeel, slightly sweet with a touch of brown sugar character. It is bottled at 46% ABV / 92 Proof.”

Both whiskeys, which price close to $70 per 750 ml bottle, are available in Colorado and New York at this time. You’ll find official tasting notes for each below.

Golden Moon Triple has a warm, sweet and malty nose reminiscent of lighter Irish whiskey. Smooth, but with just a touch of heat. Sweet, malty, slight caramel & candy notes with a hint of toasted oak on the finish.

Golden Moon Principium has a warm, sweet and malty nose characteristic. Great malt character on the palate, with a nice sweetness, caramel notes, and a spiciness on the finish.