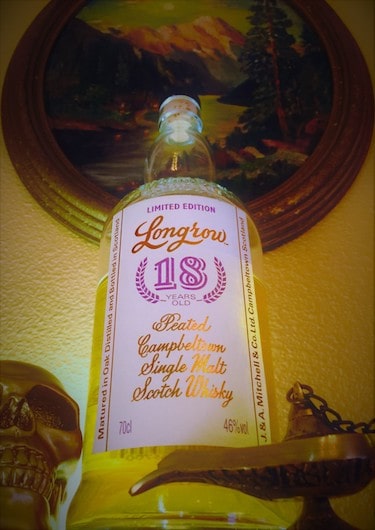 Springbank distillery has been making Longrow since 1973, when the heavily peated spirit was double distilled for the first time. This experiment was instigated by Springbank’s chairman at the time, who took it upon himself to prove that an Islay-style whisky could be produced on the mainland.

Nearly two more decades passed before the distillation became an official bottling in Springbank’s principle offerings. Barley used to make Longrow is entirely dried using peat, and this imparts a smokey, peaty quality to the whisky.

The namesake for Longrow was taken from an old mothballed distillery that used to stand adjacent to Springbank. It was the last to close before the turn of the nineteenth century in 1896. Back then, Longrow distillery used some blind coal in the kilns, as well as peat. Brora and Port Ellen, two of my favorite (mothballed) distilleries, also partially used coal-fire heating to prepare their malted barley.

Chances are high that if you’re never tasted a whisky with coal smoke in it, then you probably never will…unless you start surfing internet auctions, and you happen to be well-heeled enough not to regret winning a few very expensive bids.

In this review, I will be tasting a bottle of Longrow 18-Year-Old, which has been open for about six months. The level on my bottle is down about a third. I really like the way Springbank now stamps bottling dates, as well as run numbers, on its bottles. Kudos! My bottle is stamped 24.04.16, which means it was bottled on April 24, 2016. The run number is 176, for what that’s worth; hey, you never know, sometimes there can be more than one bottling run per day.

Appearance: Amber in the glass; deep copper in the bottle. At 46%, the legs are fairly thick and slushy. They roll down the sides of the glass slower than two single cask offerings by Springbank that I recently reviewed, both of which were bottled at cask strength. Despite this fact, the whisky displays nice beading, and I can tell by the “Katy Perry thighs” that it will have a nice, oily mouth feel.

Nose: Surprisingly, I’m reminded a little of the Springbank Local Barley 16-Year-Old. This nose is quite elegant for a peater, and fairly old school. There’s some lanolin, vanilla custard, and then the smoke kicks in with dry cigar ash, tobacco leaf, wet river stones, and walnuts. Follow-up sniffs also detect some very faint stewed fruit notes of plumb and red apple, along with lemon zest, and a little black pepper. The fruit compote notes are so muted that they pretty much blend into the whole of the dram ubiquitously.

Palate: My 2016 edition of Longrow 18 really benefited from time to oxidize in the bottle. I like the whisky now quite a bit more than I did upon first cracking open the bottle. On my tongue, I’m getting a more viscous mouth feel than expected. Perhaps it’s because my glass has been sitting covered on my desk for nearly an hour. I use a glass “watch cover” to keep the spirit from turning flat, and it works quite well.

Dried hay and a burning cigar come across as a first impression, and then comes a wave of bees wax, honey suckle, clover, caramel, sultana (yellow raisin), and the faintest hint of stewed fruit. Plums, but no apple in the mouth. A nuttiness emerges, undoubtedly from eighteen long years spent slumbering in oak. Almond paste makes an appearance. The antiseptic tang of almond nut-skin is also coming through, ever so faintly. That’s the oak talking, for sure.

Finish: A very nice balance of peat, along with industrial overtones, haunt one’s tongue, in addition to the sides of one’s mouth. It’s not unpleasant. Rather invigorating, actually. I’m going to call this one a long finish. Kind of surprising for a mere 46% ABV, which isn’t low, but isn’t high, either. Cigar ash lingers on my tongue the longest. I guess that shouldn’t be surprising. After all, the whisky in my glass has a phenol level close to 55% ppm.

This bottling, while good, does not “wow” me quite like one back in 2013 that was some of the best whisky I’ve ever tasted. And I don’t say that lightly. It was more peaty than my 2016 bottle, and also quite a bit more complex. At the time, I wondered if there could have been some older spirit in the batch.

Be this as it may, I can honestly say that I’ve ever been disappointed with Longrow 18-Year-Old official bottling releases. Now, the Springbank 18-Year-Old, well…that’s a different story. I’ve tasted some duds in my day, especially back in 2012.

Prices in the United States run quite high for both of these OB Springbank distillery whiskies. It’s really a shame how they cost almost double when they go for in the United Kingdom. Can anyone say “middle man price gouging?”

31
Shares
1.7k
Views
Share on FacebookShare on TwitterGet Our Newsletter
Read More Whiskey News
Whiskey Review: Last Drop 1970 Glenrothes Single Malt Scotch Whisky
Cheers to the Dads! Personalize a bottle of his favorite whiskey to create a modern gift for the modern man. Use code: FATHERSDAY20 for $20 off your next order of $100 or more at ReserveBar