I’ve always drooled over bottles of Laphroaig 25-Year-Old, and so I nearly passed out when Mick Secor, Publican of Oregon City, Oregon-based Highland Stillhouse, pulled out a bottle of the 27-Year-Old recently. I haven’t sipped on a bottle of Laphroaig 25-Year-Old in a dog’s age, but last night’s tasting notes for the 27-Year-Old are quite legible in my feverish hand, as are the impressions in my mind.

Laphroaig 27-Year-Old was released a few months back. The whisky was aged for 27 years, and then transferred into refill hogsheads before being double-matured in first-fill ex-bourbon barrels and refill quarter casks. That’s nearly three decades (count ’em) of maturation. In fact, it’s worth noting that this release was aged in Warehouse No. 1, which happens to be closest to the ocean. An extra oomph of marine air certainly found its way into my glass, born of waves lapping just below the white-washed walls. 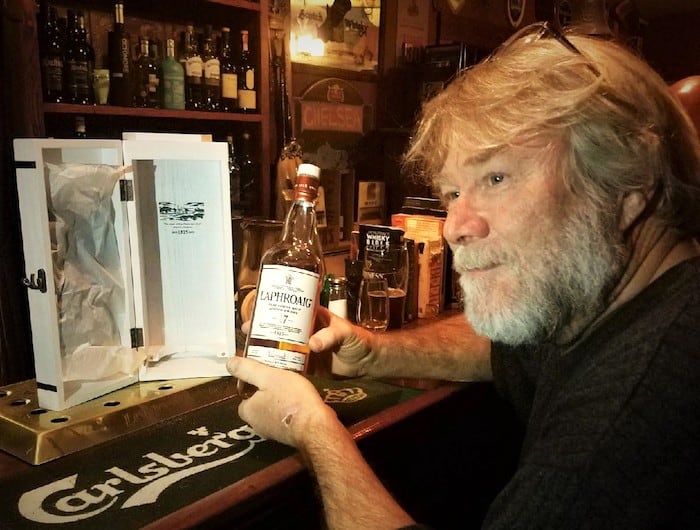 Appearance: Yellow gold in color with fantastic beading and legwork, which testify to ye olde broth.

Nose: Smoke grips the nostrils sweetly. This followed by a gust of sea air. Laphroaig’s brilliant iodine then comes into focus, along with Hachiya persimmon, fusty hay bales, caramelized milk in a pan, white Chinese pepper, and salted macadamia nut.

Palate: Exquisite peat; lime Life Savers; Boston brown bread; and the leather cover on a very old book. In time, salted caramel comes through, along with toasted almonds. There’s just the right amount of oak tannin to impart a regal sense of decorum.

Finish: Medium to long in length, falling as it does into a dreamy montage of sweet bourbon-enhanced vanilla, peat, and citrus. The nose turns ashy in time . . . almost like a cigarette ashtray. After the last sip of whisky–sniff, sniff, boo-hoo–dried remnants in the bottom of my glass continue to haunt. Postmortem effluvium almost seems better than the living whisky had been.

Normally I'm not a huge fan of double-maturation, but it really does works some magick in this case. Distillery Manager John Campbell has something to be proud of when it comes to Laphroaig 27 Year Old. Indeed, the bottle and handsome box would make the perfect Christmas gift for both collector and connoisseur alike (with the collector opening his gift, but refusing to open the bottle).

So how does this whisky compare with other grand old Laphroaig releases? Well, I tasted the 32 Year Old last year, so let me see. . . . .  By comparing my notes, it does appear that I liked the 32 even more. In fact, If I were brutally honest, I would say the price/performance ratio was quite a bit higher for that bottle--meaning it was a better buy, even though it cost about 10-15 percent more.

I know, I know, purists be damned with their talk of Islay whiskies being perfect without the influence of fortified wine casks. In the case of Laphroaig's 32 Year-Old, sweet Oloroso-enriched oak, combined with perfectly dialed-in peat smoke, was enough to make my head spin like a charmed dervish. This said, either the 32 Year-Old, or its slightly younger, ex-bourbon sibling wins in my book. Speaking of which, the handsome box cradling both of these venerable old releases brings to mind the outward appearance of Warehouse No. 1, like unto a whited sepulcher.

Suffice it to say that Laphroaig 27 Year Old has Whisky Kirk's seal of approval. Git it while the gittin's good--that is, if your wallet is amenable. The stuff is selling faster than sin on a Saturday night. In fact, if my Internet sleuthing is any indication, then a majority of major retailers are already sold out. For those of you who feel less than motivated to buy, despite sitting on a wallet fat enough to displace the natural curvature of your spine, well . . .  good luck finding a bottle after Christmas.