Editor’s Note: This whisky was provided to us as a review sample by Hotaling & Co. This in no way, per our editorial policies, influenced the final outcome of this review. It should also be noted that by clicking the buy link towards the bottom of this review our site receives a small referral payment which helps to support, but not influence, our editorial and other costs.

While the distillery itself began in this century, the farm, estate, and area around Daftmill has a long and rich history. The Pitlair estate, which Daftmill is a farm within the estate, dates back to the Kynloch family, during the reign of Alexander III (1249-1285). It was passed down through the family until 1649, and then the Walker family took ownership. The current owners, and the family who started the distillery, The Cuthberts, purchased the farm from the Walker family in 1984.

Daftmill is a family farm, which grows malting barley, potatoes, carrots, broccoli, and raises beef cattle. In 2003, brothers Ian and Francis Cuthbert decided to convert their old mill on the property into a whisky distillery. With the exception of the stills, which were made not too far away in Glenrothes, all the work on the distillery was done by locals.

The distillery takes an old-fashioned approach, working seasonally, just as the earliest Scottish distilleries did. This means they distill whisky during the winter months, then follow the other aspects of the farm through their normal seasons. During the short summer lull in farming, they once again distill whisky during part of June and July.

Daftmill distillery uses its own grain and barley grown on the farm, and takes its water from an artesian well on the property. The water from the well is pumped into a water tower for storage, then gravity fed into the distillery as needed. It is one of Scotland’s smallest distilleries by output – distilling only 100 casks per year – and one of only nine active Lowland distilleries, releasing only two whiskies a year. 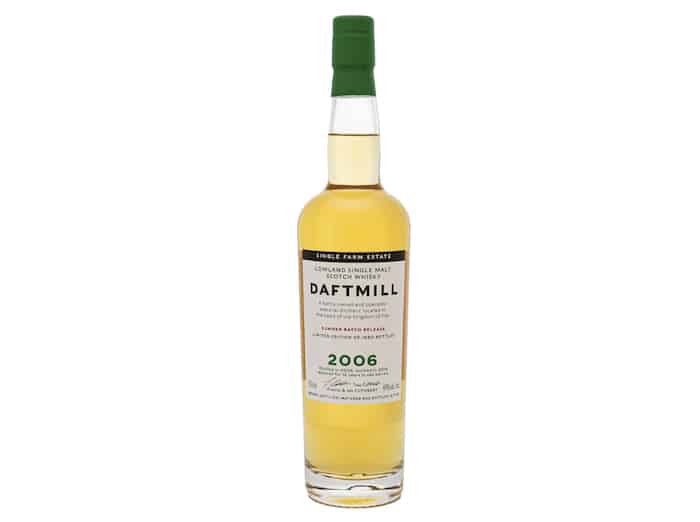 Appearance: This Scotch whisky has a very light gold color, and is very clear.

Nose: A nice touch of toffee, with floral notes.

Palate: A very nice wave of spiciness hits the tongue immediately. This is followed by a lingering honey and oak mix. There is also a slight touch of vanilla and lemon zest flavor.

This is definitely one of the spicier single malt Scotch whiskies I have tasted. A very lovely spicy warmness hits your tongue and flows down your chest. This feels like a very unique Scotch whisky. On the one hand, its likely that the small size, and self-sustaining nature of Daftmill is what gives it the unique and wonderful flavor. On the other hand, it’s a shame they are so small, and are only able to make small batches each season.