Whiskey Review Round Up: The Senator and The Ambassador

Editor’s Note: These whiskeys were provided to us as review samples by Proof and Wood Ventures. This in no way, per our editorial policies, influenced the final outcome of this review.

The Senator and The Ambassador are two whiskies made by MGP and bottled by Proof  and Wood Ventures in Bardstown, Kentucky. The brand seems to honor American tradition by finding inspiration in the deep roots of the American political system. The Senator is a 6 year aged straight rye whiskey, while the Ambassador is a 12 year straight bourbon whiskey. Both are barrel proof, which means they boast a higher-than-average ABV.

The Senator and The Ambassador are the unofficial follow-up to another release, The Presidential Dram, bottled in 2016 and released in January 2017 to commemorate the inauguration of a new president.  To clarify, when Proof and Wood Ventures came up with their original idea, the election was not yet decided,  but their whiskey is less about who is sitting in the White House, than it is about American tradition. 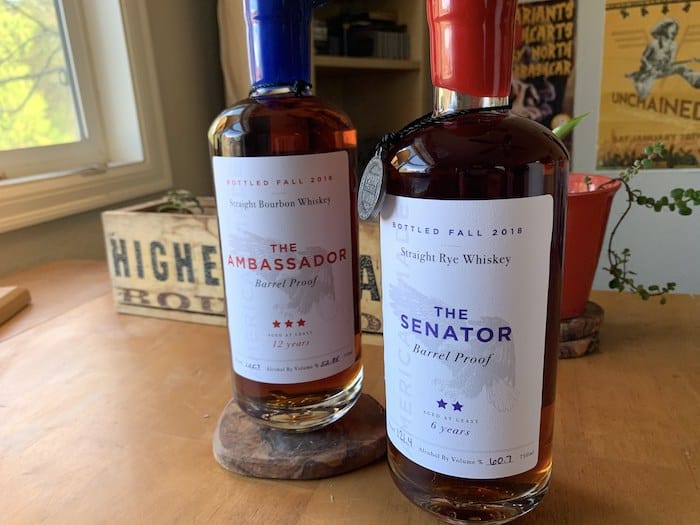 Appearance: The color is similar to a brand new copper penny, and the liquid is full bodied. The legs are graceful, but not delicate and cascade leisurely down the glass.

Nose: On first glance this whiskey smells grassy, a little bit dirty. There are some nice complexities, as it opens up, it smells a lot more sweet like a warm cinnamon roll.

Palate: The high ABV makes this rye feel all tingly all the way down to the pit of my stomach. It almost feels like heartburn at first, but after the whiskey opens up, it becomes more mellow. I added an ice cube to bring down the intensity from this boozy whiskey. It’s not intensely rye-heavy, but has a small amount of that rye spiciness that the grain is known for. It starts off sweet, it almost tastes a little bit burnt and very spicy. The rye and barley make for a very earthy combination. The rye is coming off as a little bit sour at first, with some interesting sweetness. I can’t  totally decide if I like this or not. The finish is very long, turning from earthy to more of a mushroom dryness and umami flavor. The mouthfeel is dry throughout.

Final Thoughts: For me, this missed the mark just slightly. I thought the rye was just a little bit sour, but could be tasty if that’s what you’re looking for in a rye. It had nice complexities, a delicate sweetness that was enjoyable.

Vital Stats: The Ambassador is a straight bourbon whiskey, aged for a minimum of 12 years in new charred American Oak.  The mash bill is 75% corn, 21% rye, and 4% malted barley. It was distilled by MGP in Indiana.

Appearance: It’s very amber, almost red in color. It’s not heavy but not light, settling in a Goldilocks middle ground.

Palate: The Ambassador is a really easy-drinking bourbon. It’s the kind of thing that I’d like to sip out on my porch in the dead of summer. It starts of sweet and unassuming, and builds into some spice from there rye. There are notes of orange, dark cherry, cinnamon muffins. The oak and rye come out in the body of flavor, and trail off into a pleasant finish that doesn’t linger too long.

Final Thoughts: I enjoyed this one a lot more than the Senator. I think the bourbon was well balanced, mature, and easy to sip on neat, on rocks or in whatever whiskey cocktail you find most refreshing. I’m hanging on to this bottle to keep in my collections of favorites.

37
Shares
9.5k
Views
Share on FacebookShare on TwitterGet Our Newsletter
Cheers to the Dads! Personalize a bottle of his favorite whiskey to create a modern gift for the modern man. Use code: FATHERSDAY20 for $20 off your next order of $100 or more at ReserveBar