Editor’s Note: This whiskey was sourced as a review sample from a third party. This in no way, per our editorial policies, influenced the final outcome of this review. It should also be noted that by clicking the buy link towards the bottom of this review our site receives a small referral payment which helps to support, but not influence, our editorial and other costs.

Dancing Goat Distillery is based just outside Madison, Wisconsin. Their website describes their origin story in surprisingly little detail: “The Dancing Goat was established by a collection of family and friends. We remain “True to the Goat” combining the Art and Science of Distillation from past experience with modern technology.”

Thank goodness, then, for Whiskey Fellow, who supplies a little more information: A couple years ago, Dancing Goat purchased Death’s Door Spirits and took all of their usable equipment and brought it over. Whiskey Reviewer also has more information than the Dancing Goat materials: Limosin is officially a whiskey that is produced from a rye mash. The mash bill is stated to be 100% rye and the whiskey proof varies. This is because Dancing Goat wishes to have each batch of whiskey “express itself” rather than adding water to proof consistently.

The materials that accompanied our sample of their Limosin Rye were more descriptive than the website. Limosin is made with a solera system, which is a pretty nifty way to make whiskey. They say that it’s used but they don’t explain what it is, exactly, which I think it a lost opportunity to engage the would-be whiskey-drinking public.

A solera is better-known for aging sherry or port. It incorporates a tiered system of barrels in which the older alcohol mingles with the middle and then the lower level barrels over time. I think of it like one of those towers of champagne glasses, but with barrels containing whiskey. This is a cool and unusual way to make your whiskey and I’m very surprised it wasn’t showcased front and center in their online materials. 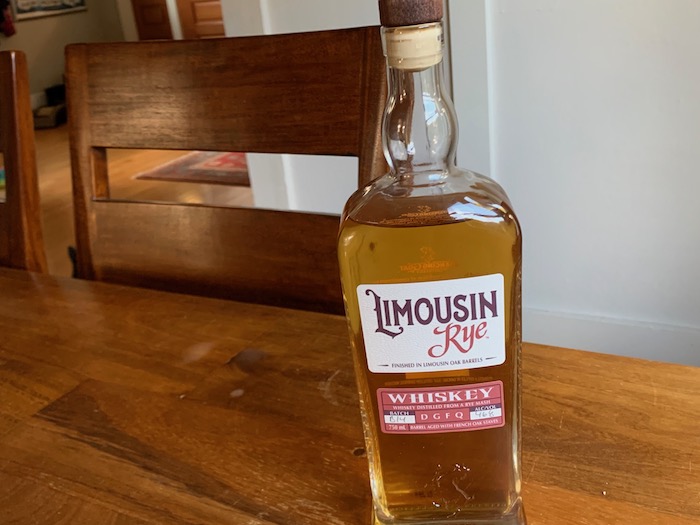 Appearance: Given the inventive process by which this is made, I thought the color would be more interesting. This is like the barest of tan. It’s the most watered down of ginger ales.

Nose: Ah, there is interest in the nose, at least. It’s complex. It’s not at all cereal-ey to me, it’s sweet and a little fruity. It’s got more of a bourbon nose, a richness: caramel, vanilla, black forest cake, and blackberries. Dessert-like, but not heavy.

Palate: On the palate, however, this isn’t nearly as complex. It’s spicy, with lots of black and red pepper. The nose lures you in, but the palate kicks back, as if defensive. I feel like spend a lot of time and pixels discussing whiskies that taste below their proof, but his one tastes far above it. It’s quite fiery, but that’s mostly all I taste, even though this whiskey isn’t even that high of a proof!

Despite an enticing nose, the palate seems rushed and unfinished–not traits I prefer for my whiskey.