Editor’s Note: This whiskey was provided to us as a review sample by JK Williams Distilling. This in no way, per our editorial policies, influenced the final outcome of this review.

JK Williams Distilling, located in Peoria, Illinois produces whiskey in the oldest continually operated distillery in the town. Peoria, said to once be known as” The Whiskey Capital of the World,” is making a comeback as craft distillers like JK Williams have revived the town’s history of spirit production.

In 2019 Andy Faris and Stacy Shunk announced that they had acquired the historic distillery and in 2020 released their first whiskeys. Their initial launch included two spirits,  Gold Zephyr Bourbon and Stormy River Rye Whiskey, both aged four years.

Stormy River Rye is a 90 proof whiskey barrel-aged in small batches for four years. It is made using a recipe passed down from J.K. Williams, a notorious bootlegger. To ensure that JK Williams remains a sought after brand Faris and Shunk hired veteran distiller Jeff Murphy to craft the company’s whiskey. Murphy has previously worked on Rebecca Creek Whiskey and Bayou Rum. He recently moved to Peoria from Louisiana to take the take the position.

“Our initial releases are a nod to J.K.’s history of distilling fine whiskeys, but I look forward to expanding the portfolio to a wide range of spirits,” Murphy said in a statement upon their release. Stormy River is named for the nearby Illinois River that serves as the backdrop for the bottle’s label.

The new owners are moving the brand forward while maintaining its strong roots in the region. “Peoria was once the Whiskey of the Capital of the World, and our namesake, J.K. Williams, was a bootician and Prohibition legend,” said Faris. “We’re excited to revive not only the brand but the culture of whiskey production in the area.”

JK Williams Stormy River Rye can be purchased around Illinois for $65 per 750 ml bottle. It will eventually be sold in the JK Williams retail space planned to open in downtown Peoria sometime in the near future. 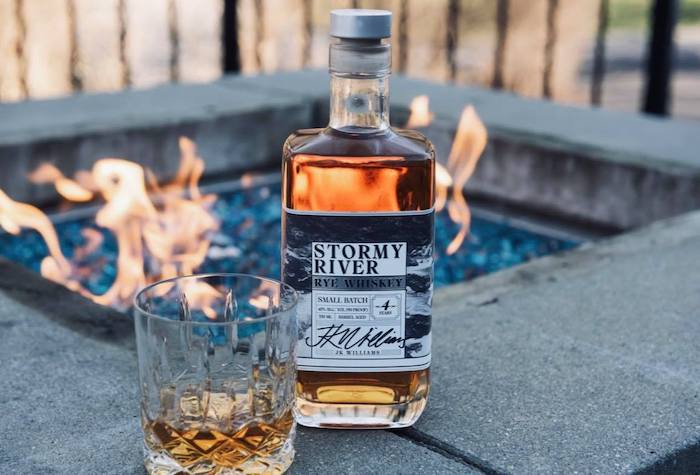 Appearance: This whiskey is the color of petrified amber.

Nose: The nose opens with strong bourbon notes of caramel sauce, banana and buttery french toast. It is rounded out by the cooling flavors of anise, mint and ginger.

Palate: This is pleasantly sweet and earthy like frosted corn flakes drenched in oat milk. Vanilla bean, caramel and bubblegum are forward in the mid palate. A light and delicate albeit slightly oily mouthfeel accompanies a short finish of cinnamon, dates and ripe cherry.