Editor’s Note: This whiskey was provided to us as a review sample by Balcones. This in no way, per our editorial policies, influenced the final outcome of this review. It should also be noted that by clicking the buy link towards the bottom of this review our site receives a small referral payment which helps to support, but not influence, our editorial and other costs.

When one thinks of Waco, whiskey doesn’t necessarily jump to mind first. However, the Texas distillery, Balcones, is changing that bottle by bottle. Balcones started as an idea in 2008 and began distilling after a year. On their tenth anniversary master distiller, Jared Himstedt, released a special peated Texas single malt simply known as the Balcones “1.”

As one of the first legal distilleries in Texas since Prohibition, Balcones had some upheavals as it hit the ground running. Each of the distillery’s members had some homebrewing skills or a background in beer. Distillery Manager, Thomas Mote, even has ties to Portland as a former Assistant Brewer at Ex Novo Brewing. However, Balcones maintains some tradition while still breaking boundaries in the whiskey industry.

The Balcones “1” is part of the distillery’s annual releases, so it is not going anywhere at the moment. Made entirely from Golden Promise barley that’s been peated and imported from the Scottish Highlands, the Balcones “1” is pot distilled. All of the distillery’s spirits, in fact, are produced by two copper pot stills. These stills, like the barley, came from Scotland. 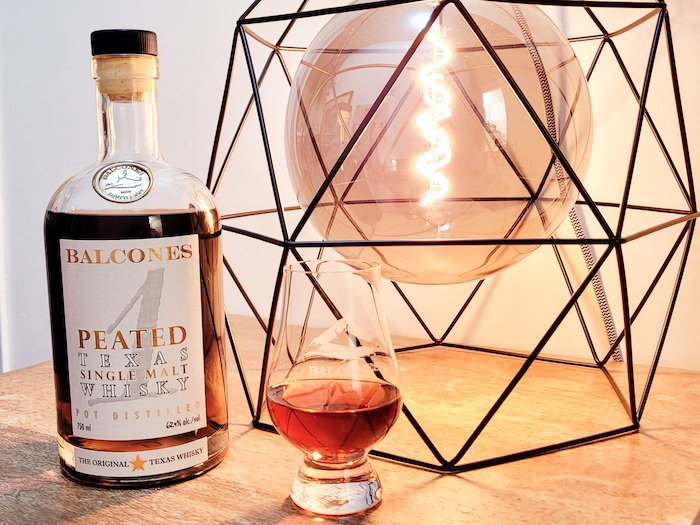 Nose: The nose is intensely rich with molasses like a chewy gingersnap cookie. A medley of dried fruit is reminiscent of a hiker’s bag of snack provisions; cherry, cranberry, plum, and apricot. Like a Christmas fruit cake there’s a touch of baking spices and syrupy raisin. Charred coconut husk and cocoa nib round off the finish of the nose.

Palate: Subtle smoke lingers throughout the whisky almost like smoked tea. It is mildly sweet, but abundant with the fruit. The nose was not deceiving. The dried fruit, particularly the raisin, mingles with cinnamon and a hint of black pepper. It is so rich and decadent, but on the other hand it is not syrupy. Candied hazelnuts mingle with cacao and espresso. While it is spicy and hot from both baking spices and the ABV, it does not overpower. Oddly, it gives off a lot of rye vibes. On the finish, and into the aftertaste, cured meat and charred brisket lingers.

Hot damn! I have found a new favourite whiskey. The nose is comparable to an Oloroso finished scotch, but it is its own whiskey. I found one sip to be an incredibly sensual experience. It is basically an aphrodisiac and charcuterie board combined. It is spicy like a rye, but is full bodied with lots of flavor. The raisin and dried fruit will appeal to wine lovers as well as whiskey drinkers.

It's a whiskey like none other, and I highly recommend enjoying it in a bubble bath.