Did you know that intimate connections often exist between alcoholic beverages and major events in human history? It is a topic of great interest to documentary filmmaker David Mayne, who recently unveiled the pilot episode (which you can watch further below in this interview) of his new series entitled Happy Hour History. How his series works exactly in exploring this connection is to take a look at the historical roots behind familiar classic cocktails. Examples of this include how the Moscow Mule and the Side Car are connected to two catastrophic world wars, and how prohibition era cocktails liked the Bees Knees and the Scofflaw helped frame the early women’s rights movement.

We recently caught up with Mayne, who is in the middle of a crowdfunding campaign to generate buzz and financial support for further episodes in his series, to ask him about his project and what it takes to tell tales about the history of booze. Note this interview is edited for clarity and brevity. 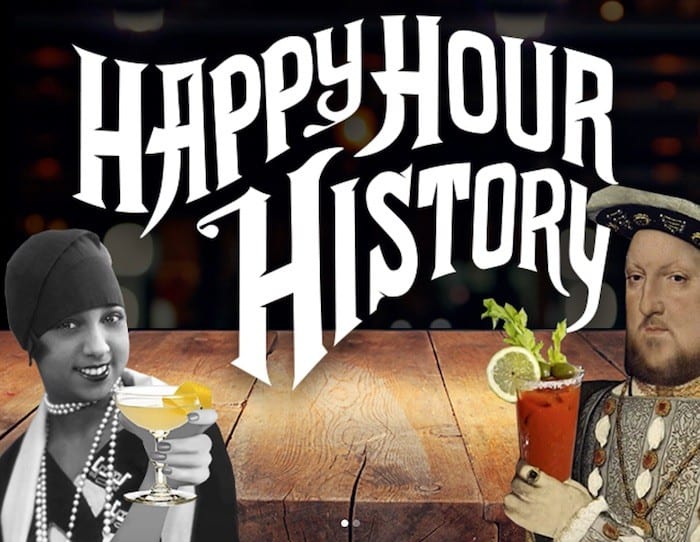 The Whiskey Wash: So we are talking with David Mayne, producer of the Happy Hour History video project. Tell us a little bit about it.

We use animations and recreations to tell the story and then at the end of our fun little history lesson, we have our little happy hour section of the show where a bartender shows you how to make that drink. We did a pilot episode and it was about how the early women’s rights movement brought about prohibition and our first cocktail was The Bee’s Knees. A Portland based bartender Nathan Gerdes, who was named the most imaginative bartender of the year once by GQ magazine, was our first bartender and he and I have become really good friends since doing that.

Yeah, so, it’s a show that highlights the intimate connections between alcohol and major events in human history.

TWW: What was your rationale for wanting to start a project like this?

Mayne: I have worked many years in doing both commercials and documentaries. I worked for a number of years on the PBS show The History Detectives, so I have actually pitched a number of projects to PBS. One on sustainability back in the late ’90s and I was told by PBS at that time “Uh, the environment’s kind of done. We’ve kind of done the environment. It’s kind of over.” Which I thought was really interesting.

I was also really fascinated by space exploration, as a kid. And so I developed an eight part in-depth series, kind of like Ken Burns’ Baseball or Ken Burns’ World War II, one of those things. But about space exploration. And I got a grant from the National Endowment for the Humanities. But then it became really obvious to me that my passion for the material did not translate into how much it would cost to actually do it. The figures were coming in at 1.2 million dollars. So I was gonna be spending all my time raising money, which is not what I do. I’m a filmmaker.

I’m always reading and researching stuff and I recently came across some books that really showed me these amazing connections between historical events and alcohol. The idea kind of popped into my head and what was different about it was, this was something that I could do. I could do an episode in a day, over a weekend with some friends and it wouldn’t cost 1.2 million dollars. We could do it for thousands of dollars. Not for free and not like on a iPhone. I am a big believer in quality work and craftsmanship in filmmaking. But still doable.

So that’s where we’re at. We did a pilot episode. I traded favors and drinks for doing our pilot episode, and we got that done and showed it around. PBS Digital was interested in a series if we did more than one episode. So that became the impetus to launch a crowdfunding campaign and that’s where we are right now.

TWW: What have you learned about the craft cocktail world, and the use of whiskey in particular, in what you’ve been doing?

Mayne: There’s some great stories. Our third episode that we’re gonna do is called Scotch and Don’t Drink the Water. It’s really about the co-evolution of the distillation of Scotch and how that came about with also the awareness of and development of safe public water drinking systems in the world.

Up until really the end of the 19th century water supplies, especially in urban areas, were highly suspect. So a lot of times people drank instead alcohol or beer or wine instead of water because they just didn’t trust it. And so that episode will trace that evolution of how that happened.

TWW: You’re hoping to do how many episodes across the entire series?

Mayne: The sky is the limit. I think it would be great to do a 12 episode season. Right now we are shooting for four and being optimistic that we could get four funded and then move on to, maybe, a stretch goal of two more episodes to get to six.

One of the future episodes I’d like to do is all about the whiskey war, which happened during George Washington’s presidency and, of course, involved taxes on whiskey. And how a bunch of whiskey distillers in rural parts of America back then rebelled against that idea and he actually had to form an army and go marching into those areas to basically stave off a potential revolution.

It’s a great story and an interesting one in that people don’t know that much about. A lot of people don’t realize, I think, that George Washington was a very profitable whiskey distiller, which he picked up after his presidency. Profitable in large part because his distillery was run by slaves, which people also don’t talk much about. But I’ve been out to his home and they offer you a tour of the distillery, which is pretty interesting. So I would love to wrap an episode around that.

What’s exciting to me about all of this is that, in the time when I first developed and then before we got where we really launched the campaign now, I’ve spent a lot of time with distillers and bartenders and really got to know spirits in a way that I didn’t before. I’m just amazed at the level of quality and craftsmanship that’s out there now. People are doing amazing things with whiskies. American whiskies are really exciting to me and bourbons.

So, yeah. Pick a spirit and I’ll tell you a story about it.