A Celebration of Casks: Stranahan’s Cask Thief Puts the Focus on Finishing

There are a lot of variables when it comes to determining the way whiskey tastes, but the easiest to understand intuitively is probably the cask. Whiskey gets all of its color and much of its flavor and aroma from the cask it ages in, and the type of wood, char or toast level, and previous contents (if any) all impact the final product. But faced with a crowded aisle of whiskeys made with different grains, using different yeasts, distilled on different stills, and aged in different types of casks for varying lengths of time, it’s hard to tease out exactly which elements of the final product are due to the cask type and which are due to the legion of other factors at play.

Not so at Stranahan’s annual Cask Thief festival, a celebration of all things cask. Located in Denver, Colorado, Stranahan’s was founded in 2004 and makes just one distillate: A 100% barley American single malt, distilled on hybrid Vendome pot stills equipped with four-plate columns. From that controlled single distillate, Stranahan’s experimental avenues are myriad, and Cask Thief gives attendees the chance to sip, taste, and explore the full implications of those other variables.

Stranahan’s got its start when founder Jess Graber got a phone call from local brewer George Stranahan of Flying Dog Brewery, who wondered what a whiskey made from his craft beer would taste like. Jess had been a home distiller for years, and, intrigued by the possibilities, decided to give it a shot.

The resulting distillate was delicious, inspiring the launch of a legit, above-board distillery dedicated to American single malt and named after the brewer who inspired it. Just like beer, the wort at Stranahan’s is boiled and then fermented in closed tanks, resulting in a distiller’s beer that’s crisper and less sour than the Scottish equivalent. It’s also aged in new, charred oak casks, just like bourbon, putting another American spin on things. 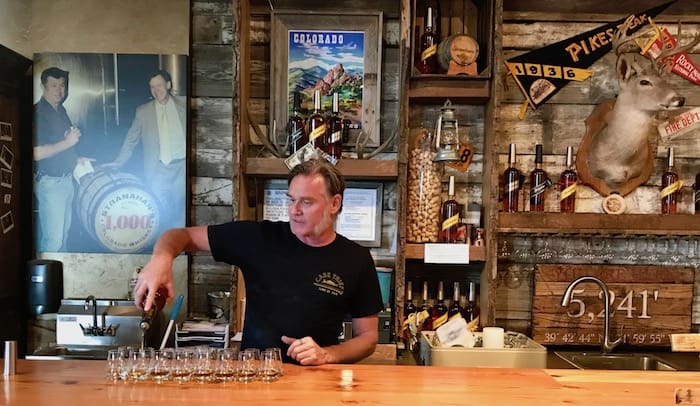 Head distiller Rob Dietrich is compact and energetic, with gigantic sideburns, a love of vintage motorcycles, and a work history that includes touring with James Brown and training for alpine combat with the U.S. Army’s 10th Mountain Division. In other words, he’s a man who seems constitutionally incapable of following the conventional path. ”People say, ‘Oh, you’re a distiller? You must have a chemical engineering background,’” says Rob. “I do not. I have a rock-and-roll background.”

Rob met founder Jess Graber over a shared love of alternative fuels, and his first trip to the distillery was part of a project to rig a motorcycle to run on heads. “As soon as I saw the distillery, I fell in love with it,” he says. “So I took a significant pay cut to learn how to distill, and I worked the night shift for years.” Today, Stranahan’s is owned by Proximo Spirits, but Rob’s still helming the production floor, and everything’s still made at the Denver distillery.

Stranahan’s core product lineup is pretty disciplined, with a Standard release made from two to five-year-old barrels, a four-year-old Diamond Peak release, and now a sherry cask finish aged four and a half years. Yet Rob says innovation is what keeps him coming to work each day, and Stranahan’s annual Cask Thief festival is one way to get a glimpse at what’s going on behind the scenes. 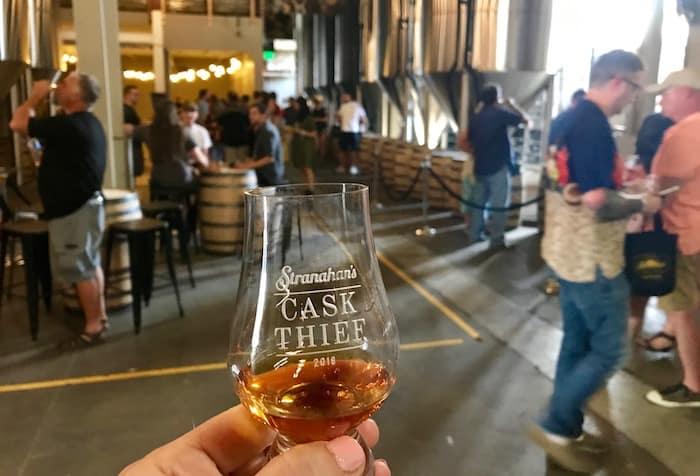 Here’s how it works: For $65 general admission, attendees get to taste six different one-ounce samples of cask strength single barrel whiskeys selected by Rob Dietrich, plus dinner, music, and the right to purchase one bottle of your favorite whiskey of the night. VIP passes ($85) get you a seventh bonus pour and the chance to purchase up to two bottles.

This year, on a sunny afternoon in mid-June, about 700 people filled into Stranahan’s production floor, Glencairn glasses in hand, to taste six different whiskeys selected to show off some serious range, exploring the impact of age, wood treatment, and finishing. Between the live music, the atmospheric setting, and the warm Rocky Mountain breezes wafting through the distillery, it was easy to feel swept away. Here’s what was on the menu in 2018:

One of the most unusual parts about the festival is the way those one-ounce samples are served: Directly out of the barrel with a thief, just the way distillers might pull a cask sample for their own evaluation. It’s a surprisingly thrilling touch, making the whole experience feel just a little bit illicit.

Of the six, Jackpot! was a favorite, delivering rich oaky depth and a lovely brown sugar sweetness. Port in a Storm, too, skewed dark and deep, with chocolate and black cherry alongside a touch of tannic walnut skin. Yet 10,000 Dollar Bill was my surprise favorite of the night, despite its younger age, with a fascinating note of capsaicin and dried chili atop Stranahan’s signature caramel and dried fruit distillate profile that felt wholly apropos to its Southwestern setting.

Stranahan’s has mastered the art of the limited release. Its winter distillery-only release, Snowflake, draws legions of fans to the distillery, some of whom camp out in line for days beforehand to ensure their own bottle of the stuff. (Amanda Schuster wrote a hilarious hour-by-hour account of her experience in the Snowflake line last year.) But for wary travelers who find the idea of tent camping in the frigid high desert winter unappealing, Snowflake remains tantalizingly out of reach.

With Cask Thief, Stranahan’s has developed a worthy summer alternative to the Snowflake madness, complete with the distillery-only nature of the releases and the inescapable urgency of exclusivity. While it took several hours for the first of the six Cask Thief whiskeys to sell out, the crowd’s itch to do their purchasing early was palpable, and within 45 minutes of the doors opening, the retail line was out the door and snaking its way through the parking lot. This time of year, that thankfully called for sunscreen, not snow boots.