Bourbon And Cigar Pairing: All Out Kings Give Me Your Lunch Money

All Out Kings is a brand new collaboration between Drew Estate’s Jonathan Drew and Master Blender Willy Herrera and Caldwell Cigar Company’s Robert Caldwell. Collaborations between brands and manufacturers are quite common in the cigar world, and this particular one has been highly anticipated by cigar geeks everywhere. This new brand comes in four sizes- Give Me Your Lunch Money, Smash, The 4th Pose, and Foreverlast- and was released in March. The MSRP for the Give Me Your Lunch Money size is around $13.

The blend is intricate- the wrapper leaf is a dark Connecticut stalk cut and sun cureded Habano, while the binder is Indonesian Sumatra, and the filler is a combination of Jalapa Viso, Esteli Viso, Dominican C-98 Seco, and Connecticut Broadleaf Ligero. It may seem complicated, but it totally works.

The wrapper has a beautiful oily sheen to it and the cigar smells like the 4-H wing at the state fair where the blue ribbons hang on the prize-winning buckets of tobacco. Predominant flavors include milk chocolate, cedar, and light spice. The draw is exceptional as is the burn, indicating stellar construction.

According to a Drew Estate press release, Jonathan Drew had this to say about the project: “Collaboration with Caldwell and Willy was super fresh. It was great to watch the magic come together from each of the crews. There is a lot of creativity birthed into ALL OUT KINGS, which will resonate from the cigar taste profile to the imagery that smashes the expected. This is an extended family collaborative that knows how to get down.” 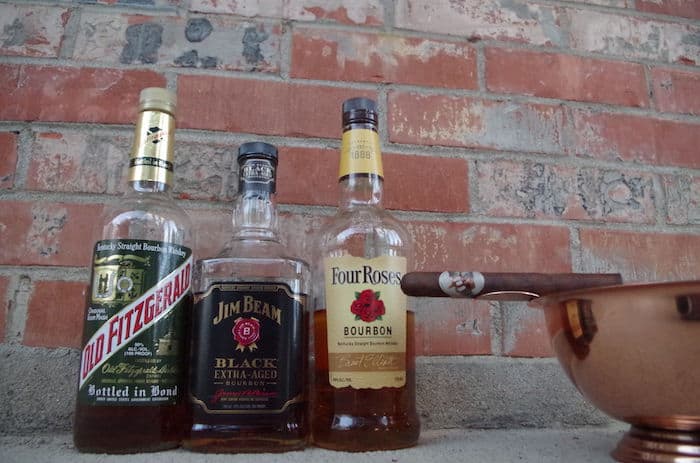 Together: The smoke brings out ripe red cherry sweetness in the bourbon as well as a nice creaminess. The bourbon brings out milk chocolate notes, cedar, and spice notes in the smoke with a hint of minerality. This was an excellent sweet and creamy pairing.

Together: The smoke brings out a tart green apple flavor in the bourbon as well as an acidic undertone. The bourbon brings out hay notes in the smoke.

Together: The smoke makes the bourbon taste like apple pie- slightly sweet, soft pie spices, and green apples. The bourbon brings out cedar, hay, and milk chocolate and there’s a pleasant hint of cream on the finish. This was a great sweet and spicy pairing.

I’ve been waiting for the perfect spring weather to bust this one out, and it was totally worth the wait. The Old Fitzgerald Bottled in Bond competed with the Four Roses Yellow Label for my favorite pairing here. The Old Fitz was a nice sweet and creamy pairing with a hint of milk chocolate, while the Four Roses Yellow Label was all about the apple pie. It really depends on what you are looking for in your bourbon and cigar pairing.

Shockingly the Jim Beam Black did not play well with the All Out Kings blend. Every once in a while that happens. It doesn’t mean anything was bad, it just means they didn’t work in tandem. That’s why I always suggest trying a flight with your cigar, that way you’re not stuck with a combination you’re not crazy about. It’s all about options.

I highly recommend picking up this cigar if you find it out in the wild. Great smoke.