Pairing bourbon and cigars is all about balance. If you pair a full-bodied cigar with a full-bodied or over-proof bourbon, they will compete for your attention. Try your next cigar with a flight of bourbons that are between 80 and 100 proof, with varying mash bills, to experience the full range of complementary flavors. 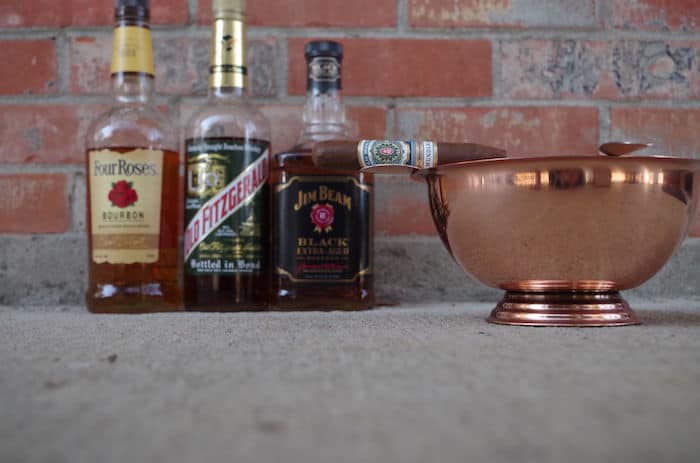 The Cigar – Alec Bradley Mundial No. 5

This was a very interesting figurado cigar (any cigar that is not straight on the sides and round on the top) – the foot is seriously tapered. The taper presented a challenge upon lighting, making the draw challenging. But once the cigar burned past the taper, it was smooth sailing. What’s more, when the ash fell off I noticed there was a marked dimple projecting from the center, almost as though the construction were designed to prevent tunneling. I’m certainly no expert in the construction of cigars, but this warrants further investigation.

The Mundial No. 5 was rated 92 in Cigar Aficionado twice and was the #16 cigar of the year in 2014. According to Cigar Aficionado, the wrapper is from the Trojes region of Honduras, while the binder and filler are from both Honduras and Nicaragua.

The cold draw was full of cocoa notes, while the smoke itself was spicy with cocoa notes. It burned evenly throughout, suggesting good overall construction. The most recent info I can find suggests this cigar is made at the Racies Cubanas factory in Honduras.

Together: The smoke made the bourbon syrupy and sweet with a hint of green apple. The bourbon mellowed all the spice out of the smoke, almost to the point that it disappeared, but it enhanced the cocoa notes.

Together: The smoke made the bourbon extra spicy, but not overwhelmingly so as I have experienced with previous pairings. There was also a faint hint of ripe apple. The finish on the combination was very interesting- it reminded me of a hard apple cider. The bourbon made the smoke very mild and cocoa forward.

It’s worth noting here that cigars change as you smoke them, so a bourbon that pairs well during the first third may not stand up in the second third and toward the end. That’s why I typically advocate for smoking a cigar with a flight of bourbon- you will find one may compliment the cigar at the beginning but not toward the middle and vice versa.

That’s exactly what I found with this pairing. During the first third, the Old Fitzgerald Bottled in Bond was the clear winner with an overwhelmingly lovely dried stone fruit flavor. After the first third, however, all three were phenomenal pairings in their own particular ways. The Four Roses Yellow label even seemed to take a slight lead toward the end of the smoke. But the Old Fitzgerald Bottled in Bond held its place as the

None of these were bad pairings, and it was nice to be able to experience the differences throughout the cigar. The is just further proof that it pays to try a wide variety of pairings and always pair your cigar with a flight of bourbons whenever possible. There’s a lot you will miss out on otherwise.

3
Shares
313
Views
Share on FacebookShare on TwitterGet Our Newsletter
Get Jefferson's Ocean at ReserveBar. Shop now!