We are living in the golden age of sparkling water. At my grocery store, the seltzer section is now larger than the cola section, and growing more vast by the day. Condensation-coated cans of Pamplemousse La Croix and Black Cherry Polar Seltzer are now easier to find in most offices than a single sheet of paper.

It begs the question, of course: Which of these fizzy waters are best for mixing with your whisky? Could a seltzer water (no added salt) or mineral water (naturally occurring minerals) outperform the classic club soda, which is made with a touch of sodium to replicate that mineral water taste? Summer is highball season, after all, and it seems entirely possible that a newfangled seltzer water might be a superior choice for your afternoon cocktail than your grandfather’s mixer.

In an effort to reveal the winning water, we made test highballs using Johnny Walker Red Label and seven different soda waters, using a ratio of two parts soda water to one part whisky as recommended by David Wondrich over at Esquire.

The first thing that became clear is that evaluating highballs is a game of subtlety. It’s also a vivid reminder that, when it comes to cocktails, the importance of technique cannot be overstated. A good highball is chilled, balanced, and retains the sparkle of the soda for as long as possible. As soon as that sparkle is gone, you’re just drinking whiskey with water—a respectable drink, but not much of a cocktail.

For a great at-home highball, here’s what you need to do:

But, of course, ingredients still matter. Onto the results. 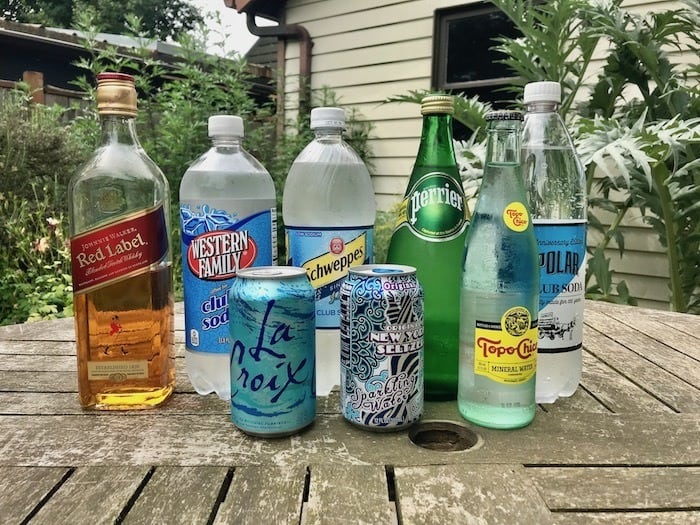 Could all these seltzer waters truly be much different from one another? It turns out the answer is yes. Photo by Margarett Waterbury, image copyright The Whiskey Wash.

The cheapest option of the bunch, Western Family Club Soda has big, coarse bubbles, a relatively low carbonation level, and a neutral taste. In the drink it goes flat fast, quickly transitioning from a lovely fizzy highball to a watery glass of diluted whiskey.

Schweppes is the grocery store standard of cocktail mixers, the brand I remember seeing on my grandparents’ shelf. Its club soda contains more ingredients than Western Family and more sodium. While I don’t claim to know much about water chemistry, those ingredients seem to be doing an important job. Schweppes Club Soda retains its mouth-filling, scrubbing-bubbles kind of texture even in the cocktail, and this highball stays carbonated far longer than all of the others but one, letting the drinker linger.

The “fancy” grocery store staple, Perrier isn’t really marketed as a cocktail mixer, but I wondered how its high-carb texture would perform in a highball. While it’s fizzy from the bottle, the mousse becomes quite a bit softer when mixed with whisky, although it keeps its bubbles a moderately long time. What I wasn’t expecting was how much its mineral content would change the flavor profile of the final drink, which read as drier and more phenolic than the others, a property I suspect might work well with a smokier whisky.

Polar Club Soda is sold on the same shelf as the mainstream cocktail mixers, but it contains a quarter of the sodium of Western Family and a sixth of the sodium of Schweppes Soda Water. Fine, soft bubbles are gentle on the palate and produce a flat, overly sweet highball that tastes a bit like long-opened cola. Not a favorite.

The now-ubiquitous hipster health drink, La Croix sparkling water comes in myriad flavors. For this purpose, we used the unflavored version, but I’m sure a perfectly enjoyable afternoon could be spent mixing and matching La Croix flavors to various whiskeys.

Cracking the can revealed a moderate carbonation level with rather large bubbles that dissipated fast in the glass. It has a very neutral flavor and clean “watery” finish, which kept the focus on the whisky and suggested a gentle sweetness.

A pretender to the La Croix throne, at least in my West Coast market, Original New York Seltzer comes packaged in a psychedelic, Instagram-friendly can and, like others, is available in a range of flavors. It has moderate carbonation and fine mouse, but unlike many of the other contenders, it’s not truly neutral. A distinct fruity, blueberry-like flavor is clearly present, and it doesn’t go away when you put whisky into the mix. It also loses its carbonation relatively quickly, moving this one down in the ranks.

I’ll be honest; I was expecting Topo Chico to come out on top from the very beginning. Bombastic carbonation and a distinctive salty flavor seemed like they’d be perfect in a highball, but it turned out I was a bit over-optimistic.

Topo Chico’s carbonation is exceptionally high and persists through the duration of the palate, practically roiling in your mouth, and it does indeed keep its fizz longer than any of the other options. Yet its tangy, mineral-y flavor profile is rather intrusive in this context, and while I’d imagined its saltiness might amplify the flavor of the whisky as sodium does in the kitchen, it actually fails to do Johnny Walker any favors.

Plain old Schweppes Soda Water made the best highball in our trial—fizzy, punchy, and bright, without any distracting mineral notes or odd off-flavors. I guess 235 years of experience in the mixer business counts for something, after all.

Perrier, Topo Chico, and La Croix were perfectly acceptable alternatives, while New York Seltzer’s berry taste and Polar’s too-soft carbonation made them less appealing. And Western Family? Go ahead and spend the extra $0.10 on a bottle of Schweppes—you’re worth it.