The Power of Independence: A Scotch Lover’s Visit to Glenfarclas Distillery

I’ll come right out and say it: It’s easy to love Glenfarclas. It’s one of Scotland’s last independent, family-owned distilleries. It still uses traditional production techniques, like direct-fire stills. The range of whiskies is unimpeachably delicious, characterized by an extensive yet sensitive use of sherry casks and an almost total lack of glossy PR. It’s also affordable, even as the industry baseline continues to trend ever-upwards. So when I got the opportunity to go visit the distillery earlier this year, I jumped at the chance. 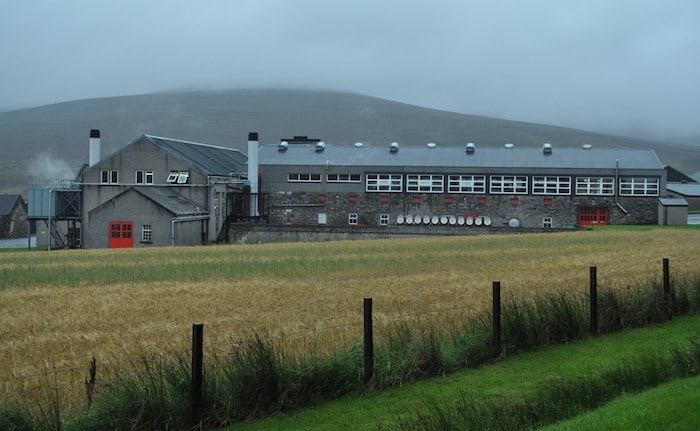 We arrived on a rainy morning in mid-September. In the visitor’s center lobby we met distillery manager Callum Fraser, an energetic man with a keen sense of humor and a kind word for every other employee we encountered, from the visitors’ center receptionist to the stillman on duty. “If I could, I’d work eight days a week,” Callum says, striding across the production courtyard. “There’s always something to do.”

Callum and the assistant manager live on the property, as do John L. S. and George Grant, the current chairman and sales director and fifth- and sixth-generation Grants to run the business. “There’s nobody making decisions that doesn’t live right here,” says Callum. “The family is physically hands-on. You see them here seven days a week. And that makes everybody feel part of the family.”

John L. S.’s great-great-grandfather, John Grant, founded Glenfarclas in 1865, and it’s remained in the family ever since. Independent family ownership means Glenfarclas has been able to make principled, sometimes quixotic decisions without having to answer to shareholders or bean-counters.

For example, during the mid-1980s, they decided to continue producing whisky at normal capacity rather than reduce production in response to dwindling consumer demand—a piece of foresight that means their cellars are enviably stocked with well-aged whisky today. More recently, the Grants installed a brand-new water treatment plant at significant expense. It allows them to process all of their pot ale onsite before releasing it back into the River Spey, a major investment in reducing their environmental impact as well as their dependence on outside treatment facilities.

Today, our first stop is the malt storage and milling building, where about 132 tons of unpeated malted barley is ground into grist each week. Some older Glenfarclas whiskies contain a touch of peat smoke, as the onsite maltings (closed in 1970) relied on peat dug from the property for fuel. “It’s really subtle,” says Callum, “not like a huge Islay, but it’s there.”

From there, the grist moves up to the mashing room. Glenfarclas has Speyside’s largest mash tun, with a diameter of 10 meters and a grain capacity of 16.5 tons. Inside, we watch grist being mixed with hot water to extract its sugars. The aromas—sweet, cereal, a little bit toasty—hint at good things to come. Wash is fermented in stainless steel wash backs for at least 72 hours with liquid yeast. We taste a sip of the beer, and while it isn’t something I’d want to drink a pint of, it isn’t half bad—dry, sour, and deeply malty. 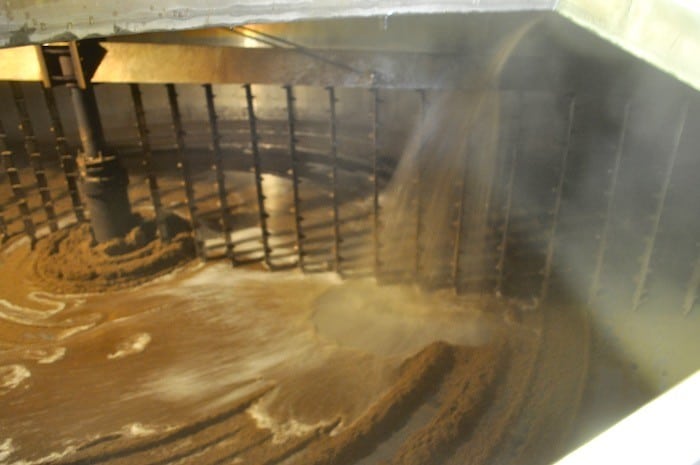 After fermentation is complete, it’s on to distillation. Walking in, the first thing I notice about Glenfarclas’ stillroom is the heat. These six stills (three wash, three spirit) are heated by direct gas fire, which generates temperatures two to three times higher than steam alone. All operational stills are hot, but hold your hand a few inches from the base of a Glenfarclas still, and the difference quickly becomes apparent. It’s like standing next to a wood fire, only it smells like new-make, not woodsmoke.

At an event in Portland, Oregon I heard George Grant explain that Glenfarclas once tried to transition to steam heat, but the changes in the flavor of the resulting spirit were so drastic they quickly reverted to gas. Callum explained that the higher temperatures of direct fire initiate Maillard-type reactions that produce Glenfarclas’ distinctive toffee-chocolate flavor, and the new make spirit does indeed have a wonderfully caramelized, malty aroma. 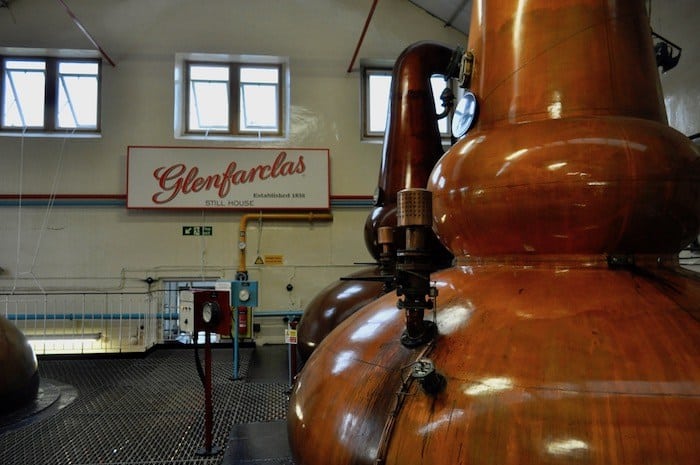 The true potential of that spirit is realized at our next destination, the warehouses. Passing through the bright red doors of Warehouse No. 1, we’re greeted by the heady aroma of maturing whisky. Striding between the casks, Callum produces a thief and glass from his pocket and nonchalantly knocks the bung from an ex-bourbon barrel from 1953. Stately but still lively, seamlessly integrated, mellow, with that faint wisp of smoke from the historic onsite maltings, this is the stuff that powers whisky dreams. Then Callum smiles, glances at a larger tour at the front of the warehouse, and says, “Want to see me make somebody’s day?” He walks over to the group and holds out the glass. “Who wants to try a 65 year old whisky?” he asks. Let’s just say those visitors got their £7.50 worth from their tour.

Later, we tasted samples from a 50-year-old first-fill sherry cask (so inky dark it was almost opaque), a cask filled by then-MP Kenneth Clarke in 1994, and a cask from my birth year, 1986, among others. Each whisky we tried was distinct and remarkable, but they all retained that mouthwatering chocolate-toffee flavor, that perfect balance between spirit and cask character, that lovely orangey-fruitiness, and, for lack of a better word, that completeness that makes Glenfarclas so satisfying. From the first sip, drinking Glenfarclas just feels like you’re in good hands. 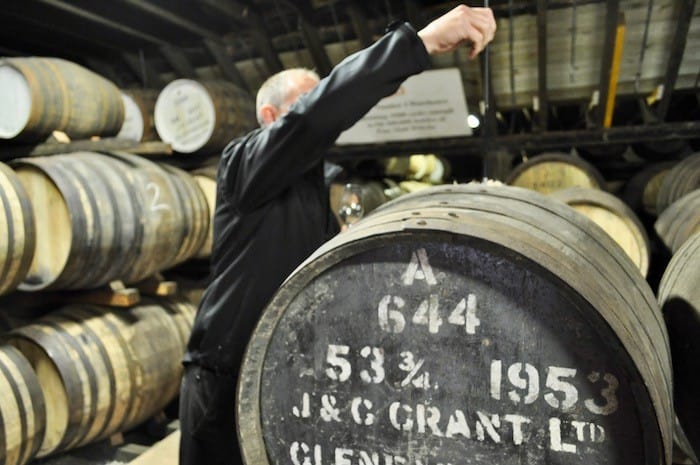 Truth be told, I was expecting to taste delicious whisky at Glenfarclas. But something I didn’t anticipate was the clear focus on valuing the men and women who actually make the stuff. Throughout the production floor, professional portraits of the production staff line the walls, a recent addition designed to draw more attention their skills, talents, and value (you can also see them on the Glenfarclas website).

“Without these guys, we don’t have a distillery,” says Callum. “Ali here?” he says, pointing to a portrait of mashman Alistair Miller. “Ali’s been here since 1972. And Archie, he’s been here 33, 34 years, and absolutely knows the place inside out. He’s just…Glenfarclas.” Callum says the production staff wasn’t totally sure what to make of picture day at first. “We had to convince them,” he laughs. “But now that it’s happened, they’re quite chuffed.” 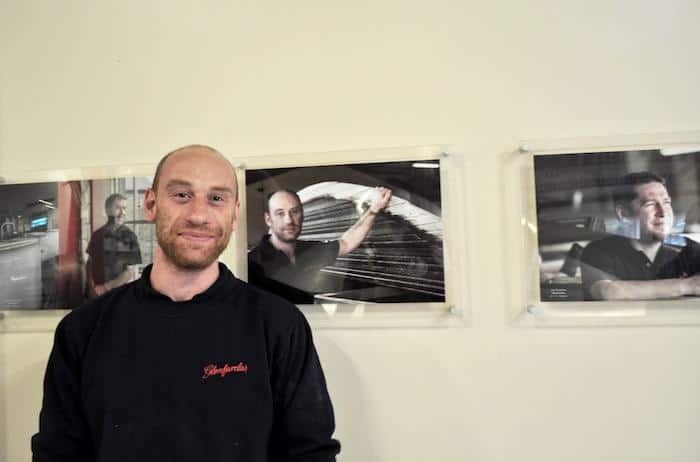 It seems to me that attitude does more than make visiting journalists feel warm and fuzzy inside—it inspires a sense of pride and ownership almost impossible to create any other way. Another distiller I met at a different Speyside distillery began his career at Glenfarclas. When he talked about his time there, I heard more than a hint of nostalgia in his voice. “I haven’t been there in ages, but when I was there, they had almost no automation,” he said. “So I’d always try to do my mash a little bit better than the next guy, a little bit better than my last mash, just to see if I could.”

For people who still believe that it’s possible to be successful by doing the very best job you can and trusting consumers will notice, Glenfarclas shows the way. And for the cynics, well, the proof is in the glass.

377
Shares
246
Views
Share on FacebookShare on TwitterGet Our Newsletter
Get Jefferson's Ocean at ReserveBar. Shop now!