While South Africa is perhaps best-known for its wine industry, the James Sedgwick Distillery in Wellington, South Africa, has been producing whiskey for over 100 years. It’s named after Captain James Sedgwick, a former captain in the British East India Company who settled in Cape Town in 1850. James opened a bar, which later served as a launching point for a luxury goods shop called J Sedgwick and Company, focused on selling all the important things in life: spirits, liqueurs, and cigars.

When Captain Sedgwick died in 1872, his sons decided to cut out the middleman and purchased a distillery in Wellington, naming it after their father, and began distilling their own brandies and whiskies. Yet it developed little in the way of reputation outside of South Africa over its first century of operation.

In the early 1990s, however, that began to change when Andy Watts, a former professional cricket player, became Manager of the distillery. Andy had previously worked for Morrison Bowmore Distillers in Scotland, where he learned to distill from some of the industry’s leading craftsmen. Eventually, Andy returned to South Africa, determined to show the world that “although the Scots are known worldwide for their incredible whiskies, it is not their sole prerogative to make it.”

With his experience at Bowmore, you’d expect the Sedgwick Distillery to produce single malt, which they do under the Three Ships brand. However, the whisky we’re looking at today, Bain’s Cape Mountain Whisky, is actually a single grain whisky, a designation that means it’s the product of a single distillery and made entirely from unmalted grain. Bain’s Cape Mountain Whisky is made entirely from South African maize (corn for us North Americans), putting it in line with Irish single grains like Greenore and Kilbeggan.

After distillation, Bain’s Cape Mountain Whisky undergoes a unique maturation process where it spends time in two sets of barrels. First, it spends about three years in first-fill ex-bourbon casks before being dumped, vatted, and re-filled into new first-fill ex-bourbon casks for another 18-to-30 months. The ambient temperature in Wellington during the summer routinely exceeds 40 degrees Celsius (104 Fahrenheit), which accelerates aging and brings annual angel’s share loss near a cringe-inducing 5%. 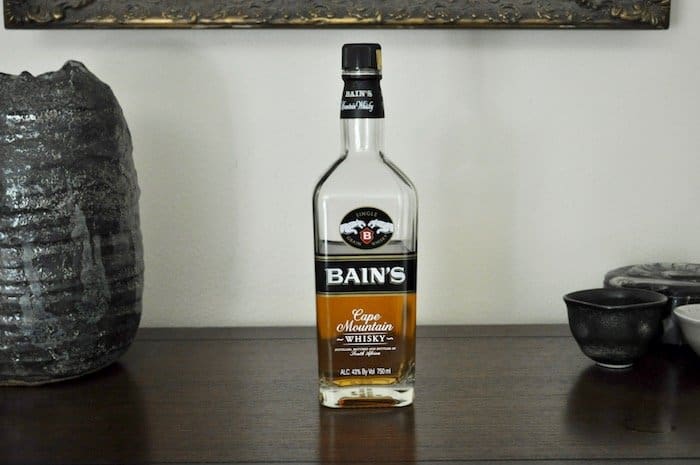 Nose: Opens like a light bourbon, a bit vaporous with some oaky tones and a sweet vanilla frosting note. Banana, pear, and boiled corn emerge with time, but it’s lacking the spice usually found in bourbon. The aroma is simple but pleasant– not a lot of complexity, but also nothing incongruous or off-putting.

Palate: In keeping with the aroma, the taste is relatively light and perhaps a bit thin. There’s lots of coconut cream with a bright lemon note in the center, which eventually trails off into a slightly sticky green banana (caramelized plantains if you’re fancy) towards the tail end. While lacking in bold elements, there is good balance between oak tannin and the sweetness of corn, two flavors which bob back and forth in the aftertaste for a surprisingly long time, considering the relatively light body.

Overall, this is a light, easy-going whisky, which I can imagine gulping down during summer cookouts or perhaps before dinner as an aperitif highball. The bright, uncomplicated flavors have a refreshing quality, but it wears a bit thin with too much consideration, and left me reaching for something with a bit more heft as a follow up.