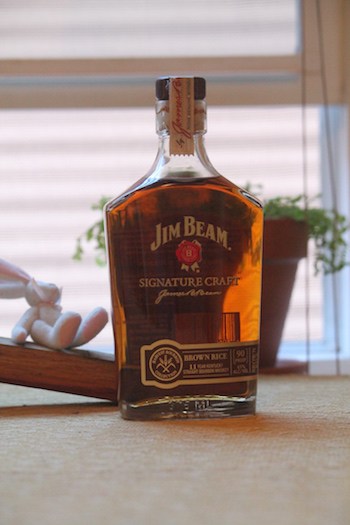 Although described by Beam-Suntory as alternatives to the typical bourbon, their tasting notes for the set tell a very different story. It is clear that the brand does not aim to stray far afield from their expected range in terms of branding, taste or audience.

I tasted the brown rice iteration, known as Jim Beam Brown Rice Bourbon, of the recently discovered and subsequently released Harvest Bourbon Collection. The brown rice spirit did not offer significant visual changes from a typical bourbon, proving the expected golden brown hue in the glass. Its richness in hue did hint at a certain age, however—indeed denoting its 11 years in cask.

Immediately on the nose, heavy oak and warm caramel suggest typical bourbon characteristics. As the whiskey opened, toasted nut butter—specifically peanut butter—were present on the nose. On the palate, high sugar and starch strike first, followed by a certain heartiness. It is beyond me whether or not the heartiness experienced sprung from my conception of brown rice as an actual food, or from the spirit itself.

Rounding the dram out was a molasses and dark brown sugar element, relatively expected in a bourbon. The finish hinted at dulche de leche and milk caramel.

As compared to Margarett’s less than perfect experience with sister red wheat, mine with Beam’s brown rice experiment was surprisingly enjoyable. Although not entirely worth $50 for 375 ml, this whiskey was one I’d happily drink again. Nearing cloying, but settling into expectedly warm, Jim Beam Signature Craft Brown Rice, certainly has something to offer the comfortable whiskey aficionado, but may not suffice for the more adventurous set.

A reasonable 84 seems appropriate for this dram.