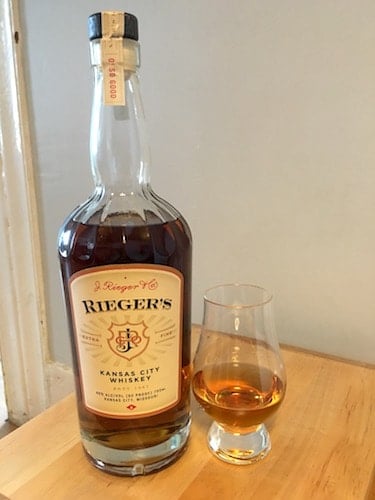 It’s not unique for a distillery to market a product as a rediscovered secret that was lost in the dark ages of Prohibition. However, the decades-defunct Jacob Rieger & Company is using that narrative for the resurrection of an entire brand of spirits, including the distillery’s pre-Prohibition styled Kansas City Whiskey.

Founded in Kansas City in 1877, Jacob Rieger & Company grew to produce more than 100 alcoholic products and served about 250,000 subscribers of a mail-order delivery service in its heyday, according to the company’s website. The company nonetheless succumbed to the federal prohibition on alcoholic beverages in effect between 1920 and 1933 – until the brand name was officially revived in 2014.

What gives Rieger’s Kansas City Whiskey its “pre-Prohibition” style is sherry, a once-common coloring agent in the 1800s. As both a throwback and a unique flavor component, Kansas City Whiskey includes a “trace amount” of 15-year-old Oloroso sherry from Bodegas Williams & Humbert, a winery near Jerez, Spain.

Given Rieger’s recent revival and plans to age its whiskeys at least five years, the 92-proof Kansas City Whiskey contains sourced corn, malt, and rye whiskeys, all of which are aged a minimum of seven years.

Vital Stats: 92-proof, blend of unspecified amounts of corn, malt, and rye whiskeys, all aged at least seven years, with trace amounts of 15-year-old Oloroso sherry. A 750-milliliter bottle runs between $32 and $40.

Nose: Starts with a subtle scent of sweet berries – incidentally reminiscent of a dessert wine like Sherry – but also taking on tart notes of a cranberry sauce. A deeper whiff brings out a typical sweet caramel, but with notes of autumnal spices like cinnamon, nutmeg, and cloves.

Palate: Initially sidles up to the tongue with the subdued, velvety sweetness of honey butter. However, that sweetness quickly evolves into a progressively more tingly burn that eclipses the other flavors. The burn continues building until swallowed, then gives way to the charred, caramel sweetness of a crème brûlée crust, without notes of the aforementioned autumnal spices, along with persistent tingles toward the back of the tongue and mouth.

While the aroma promises a complex blend of flavors – a combination of scents that transports me, personally, to a cool, October night by the fire – the whiskey falls short of that promise after it hits the palate. A smooth first impression turns to a generally indiscriminate harshness that dominates the palate even after swallowing.

Still, Rieger’s Kansas City Whiskey is above average for its price and would be well-suited for classic cocktails.