The House of Suntory looks to honor what’s described by them as the birthplace of Japanese whisky with the launch of the reformulated Yamazaki 25 Year Single Malt.

The Yamazaki 25 is blended from rare whiskies aged more than a quarter of a century in the place Shinjiro Torii chose to begin the journey of Japanese whisky. 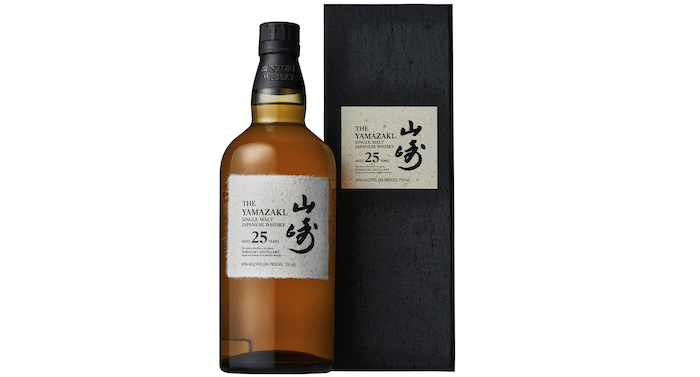 Yamazaki 25 (image via House of Suntory)

Fukuyo said the Yamazaki 25 was a journey in rediscovering what Yamazaki is, a pioneer of Japanese whisky. Today, the Yamazaki 12, Yamazaki 18 and the reformulated Yamazaki 25 all contain blended liquid components aged in American oak, Spanish oak and Japanese Mizunara oak.

“My inspiration for Yamazaki 25 was the Yamazaki 1984 statement that was awarded the ultimate recognition of the Supreme Champion Spirit at the International Spirits Challenge in 2010,” Fukuyo said in a prepared statement. “We went back to the key component whiskies of Yamazaki. We deliberately chose to feature the depth and profound nature of the notable Japanese Mizunara Oak. For in its meticulous balance with the American and Spanish Oak, Yamazaki’s signature multi-layered taste profile and complex aroma is accentuated.”

Yamazaki Distillery, started in 1923, can claim to be Japan’s first and oldest malt distillery. Nestled on the periphery of Kyoto, the area around Yamazaki Distillery has been long referred to as “Minaseno,” known for its pure, natural water, even mentioned in the Man’yoshu, the ancient anthology of Japanese poetry.

The waters of Yamazaki were selected by the nation’s Ministry of Environment as one of Japan’s one hundred best natural mineral waters.

In 1984, second generation Master Blender Keizo Saji introduced Yamazaki Single Malt Whisky to commemorate the 60 years since the first drop of whisky was made at the Yamazaki distillery.

The bottle label is handcrafted mulberry Echizen paper produced via a slow process of drying on wood boards (a traditional Japanese method).

Yamazaki 25 Single Malt comes in at 86 proof with a suggested retail price of $2,000 for a 750ml bottle. Official tasting notes are below.